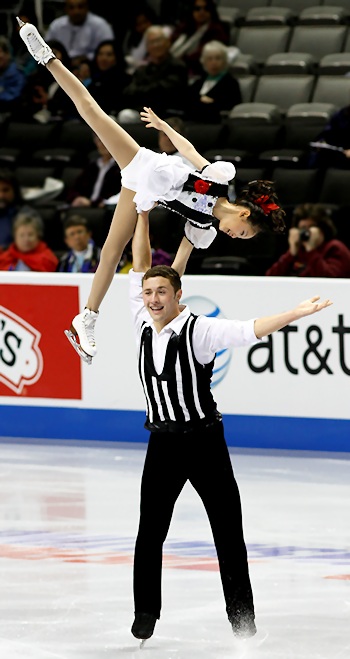 The top four teams remained the same at the conclusion of the novice pairs free skate at the 2012 U.S. Figure Skating Championships. Leading the way was Chelsea Liu, 12, and Devin Perini, 18, who skated to a fun Charlie Chaplin inspired program to capture their first U.S. title.

The pair, who train in southern California with former world medalists Jenni Meno and Todd Sand, opened with side by side double Lutzes on which Liu fell.

“The warm up wasn’t good, but we just did the best that we could do,” said Liu. “I tried to put the fall behind me to focus on the rest of the program.”

“I think that the thing that’s great is that they showed that they are tough competitors,” said coach Meno. “I think they felt a lot of pressure even though we didn’t want to put that on them.”

Holding on to second place were the team of Caitlin Fields, 16, and Jason Pacini, 21, who train in Arizona with Olympian Doug Ladret. The duo attempted a throw triple loop, but was unsuccessful on the landing.

“We definitely had a shaky beginning,” Pacini said of their Cutthroat Island program. “I think we recovered nicely and finished strong at the end.”

Fields and Pacini finished with 118.89 points in the competition.

Winning the bronze medals were Alexandria Shaughnessy, 19, and James Morgan, 19. The duo skated to music from the musical Evita, and finished with 113.87 points, up from fifth place last season.

“We just trained really hard and our coaches sent us in the right direction,” Shaughnessy said. “We really love to perform, so we were excited to go out there and do our best.”

The event continues with the Junior Ladies Short Program.