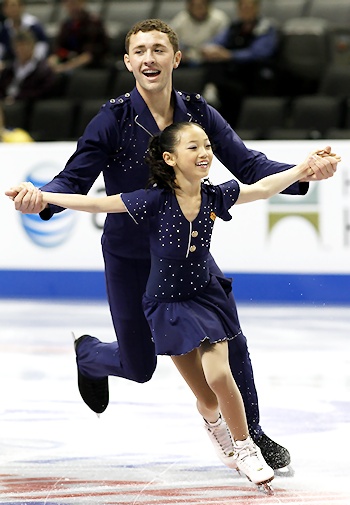 Last year’s novice pairs silver medalists stepped up to the challenge of being pre-event favorites this afternoon at the 2012 U.S. Figure Skating Championships, and won the short program in San Jose, Calif.

“Chelsea was just 11-years-old last season, and we didn’t want to rush her into anything too quickly,” coach Jenni Meno explained. “We are investing in this team in the long term, and are letting them develop at a natural pace.”

Liu and Perini were pleased with their performance, and earned 38.83 points overall.

“We did each element one at a time,” Perini explained. “We really focused on getting our levels, and we are happy that things came out so well.”

In second place were last year’s pewter medalists Caitlin Fields,16, and Jason Pacini, 21, who are in a virtual tie with the leaders with 38.13 points.

“It went well today,” Fields said. “We performed our best, and we were rewarded with a personal best score.”

In their program, set to Randy Newman’s The Flick Machine, the duo performed the only throw double Axel of the competition.

“I wish that it would be rewarded more,” said coach Doug Ladret said. “It’s much more difficult than the throw double loop, and I think it should get more credit.”

Finishing in third place were 19-year-old Alexandria Shaughnessy and her 20-year-old partner James Morgan with 37.02 points.

“It felt good out there,” said Shaughnessy. “It was nice to do what we always do in practice.”