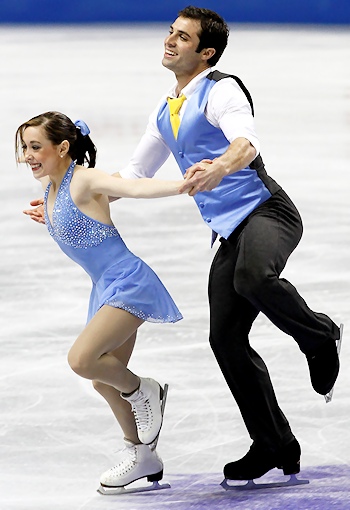 Mary Beth Marley and Rockne Brubaker perform to "Singin' in the Rain" at the 2012 U.S. Figure Skating Championships.

Mary Beth Marley, 16, and Rockne Brubaker, 25, took the lead in the senior pairs short program at the 2012 U.S. Figure Skating Championships, skating the only clean program of the top three contenders. With rain clouds forming outside the HP Pavilion, their Singin’ in the Rain program drew a partial standing ovation from the San Jose, Calif., crowd.

“Tonight felt really good to perform again,” Brubaker said. “We’ve trained hard, and we have felt good all week, which allowed us to let loose and tackle each element one at a time.”

As a two-time U.S. Champion with Keauna McLaughlin, Brubaker is in familiar territory, but his partner of two years finds herself in uncharted waters. The two are focused not on placement, however, but instead on improvement.

“I definitely feel that we’ve improved since Skate America,” Marley said. “I’m happy to get a level two on our twist because the catch isn’t something that has been easy for me. Our components are getting better and better, so that’s very encouraging.”

Brubaker added, “Longevity is key. I think that we are on the right track, but it’s going to take some years to get to where we want to be. But I have to say that this is the best I felt skating in a couple of years.”

Marley, a native of Downer’s Grove, Ill., and Brubaker, from nearby Algonquin, Ill., were rock solid from the very start, nailing side by side triple toe loops. The southern California trained team also performed a split triple twist and a strong throw triple Lutz. They lead by more than four points with a score of 65.80 points.

Finishing in second place are two-time silver medalists Amanda Evora, 27, and Mark Ladwig, 31. Despite a fall on an under rotated triple toe loop by Evora, they scored 61.27 points.

“It was a comfortable performance,” Ladwig shared. “We executed a number of great things, and my personal low goal was to score 60 and we did that. I’m happy.”

Evora was just as optimistic about their performance.

“Despite the one mistake, we continued to perform throughout the program,” she said. “We remained focused and were able to finish strong.”

In their The Man I Love” program, Evora and Ladwig earned level fours on each of their spins, their lift, and their step sequence. When asked about being in second place—their home for the past two seasons, Evora laughed.

“Before we were second, we were forth for a couple of years,” she said. “And before that we were seventh, and 10th, and 12th. Placements can change from one season to the next. After being in this sport for so long, I’ve learned it’s more about that feeling at the end of a performance, and that’s what we’re pushing for.”

In third place are the new team of Caydee Denney, 18, and John Coughlin, 26, each a former national champions in this event. A fall on the throw triple flip was the lone error in their nationals debut as a team.

“I think we probably had a little extra adrenaline,” Coughlin admitted. “We’ve been waiting so long to compete here at nationals that I think we just got a little excited.”

Skating to familiar music—Lee Holdridge’s East of Eden, Denney and Coughlin seem to be on the right track. A huge triple twist and commanding side-by-side triple toe loops were perhaps the highlights of the program. They scored 60.88 points.

“It was fun to skate in front of an audience again,” Denney said. “We’re looking forward to fighting hard in the free skate on Sunday.”

Finishing in fourth place are Marissa Castelli, 21, and Simon Shnapir, 24, who are less than a point behind Denney and Coughlin. Teammates Gretchen Donlan, 18, and Andrew Speroff, 23, are in fifth. Last year’s junior silver medalists Andrea Poapst and Christopher Knierim are in sixth.