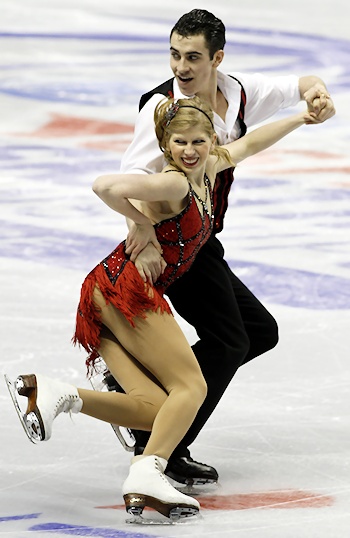 It was a great day to represent the Pavilion SC of Cleveland, Ohio, as two teams representing the relatively unknown club captured medals in the novice dance competition at the 2012 U.S. Figure Skating Championships.

Leading the way were Holly Moore, 16, and Daniel Klaber, 17, who moved up from second place after the novice set pattern dances yesterday to capture their first national medal of any color.

“We really had a lot of fun,” Moore said after the free dance. “We love our program, and I really hope that showed. We worked hard this season, and it really paid off.”

Last year, Moore and Klaber finished in eighth place in this competition, and are proud to have made such a big leap to the top of the podium.

“We got a personal best score, so that was very exciting,” Moore explained. “I think that over the season, the program has really built. It was exciting to put it all together at the right time.”

Skating a sassy number to Julie Andrews’ Le Jazz Hot, the gold medalists not only earned level four for each of their three lifts, but they also earned the same for their dance spin. Their free dance total of 62.02 was enough to catapult them into first place, overcoming a three-point deficit after the pattern dances. The duo score 109.53 points in the competition overall.

The overnight leaders, Whitney Miller, 13, and Kyle MacMillan, 14, slipped to second place with a strong, but less technically demanding, routine in their first season together as a team.

“It felt like it was one of our best skates and we were really happy with the scores,” Miller said.

Miller and MacMillan, who hail from the Washington D.C. area, skated to Hungarian Gypsy Waltz and Pet Nahych Berusek, earning level four for each of their lifts. However, their circular step sequence earned just a level two.

“We still need to work on our power,” MacMillan admitted. “We need more flow in our programs, and that will help us with levels as we progress.”

Rosinski, 16, and Jaffe, 17, managed just fourth place in the free dance, but were able to hold onto third place overall on the strength of yesterday’s pattern dances scores.

“We are really excited,” Rosinski said. “We feel that it was the best free dance performance that we’ve ever competed.”

The duo skated a fun routine to music by James Brown, but was unable to keep pace with the leaders in terms of levels. For both the midline steps and the dance spin, Rosinski and Jaffe earned just level two. The bronze medalists earned a competition total of 99.13 points.

Winning the pewter medals, though finishing in third place in the free dance, were 11-year-old Chloe Lewis and 13-year-old Logan Bye, who train in the Colorado Springs, Colo., area. They earned a competition total of 93.99 points, and could be a threat to win the title next season.