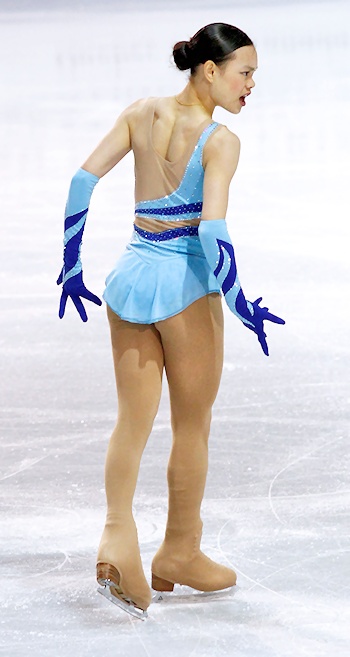 USA's Vanessa Lam performs to "Rhapsody on a Theme of Paganini" at the 2011-12 ISU Junior Grand Prix Final of Figure Skating.

American ladies played the role of bridesmaid to perfection in the Junior Grand Prix series last season, winning the first six silver medals of the series. It wasn’t until the seventh and final event in the Czech Republic when an unheralded lady in waiting stepped up and ascended to the top step of the podium.

From the Los Angeles suburb of Bellflower, Calif., 16 year-old Vanessa Lam, a quiet yet well-spoken high school student, emerged from relative obscurity to hope for the future in the span of one fall weekend in Ostrava.

In fact, Lam wasn’t even named to compete in the series initially, and had to wait to be assigned to the competition as an alternate just days before the event.

“It was great just to get the invitation to compete let alone win,” she commented. “I was eighth in junior ladies at (the 2010 U.S.) Nationals, so I was an alternate until the very last minute. Winning was such a surprise, and it motivated me to continue working hard for the rest of the season.”

Had Lam been assigned to an earlier competition, she might have had a shot at competing in the Junior Grand Prix Final, but with just one competition under her belt, it was mathematically impossible for her to qualify.

Instead, Lam stayed home and earned her way to the 2011 U.S. Championships in Greensboro, N.C., in the traditional way – by winning the Pacific Coast Sectionals. It would be her first national championships on the senior level. She finished in seventh place, less than five points out of fifth.

“Finishing in seventh place gave me confidence that I can compete with the top level of skaters,” Lam explained. “It gave me a push heading into this season.”

Over the summer when the initial 2011-12 assignments were announced, Lam was near the top of the list of skaters named to the Junior Grand Prix. In early September, she headed to Brisbane, Australia, with just one goal in mind – improvement.

“I didn’t have a lot of experience competing in international events, so I just wanted to show improvement from event to event,” she explained.

Though Lam had uneven performances in both programs, she was able to skate well enough to earn her way back to the podium. With a bronze medal to her credit, Lam headed back to California satisfied with the result, but motivated to improve.

“The competition itself was very exciting, and it was very comfortable,” said Lam. “It seemed like a smaller competition than it actually was because the environment was so relaxed. I was happy to win the bronze medal, but my programs could have been a lot better.”

With the podium finish, Lam earned a second event – this time in Innsbruck, Austria, and headed to Europe with a chance of qualifying for her first Junior Grand Prix Final.

“I felt really prepared going in to the competition,” she recalled. “I had been training really well, and I was ready to skate well.”

In Austria, Lam struggled with her Con te Partiro short program, but worked magic in her Rhapsody on a Theme of Paganini free skate to win the competition. With the gold medal, Lam earned entry into her first ever Final.

“It was really awesome to win,” she said. “I learned that even if I miss an element, that I have to keep pushing through. I stayed calm and focused, and was able to get the job done.”

Former World and Olympic coach Dough Chapman, and current coach to Lam, believes that staying focused is one of Lam’s strongest assets.

“She is receptive and very easy to teach,” Chapman said. “It’s easy to coach someone who has that rare combination of intelligence and coordination. If Vanessa gets into trouble in her program, she adapts. She understands the system very well which allows her to think on her feet as she is competing.”

In that same vein, Lam looked forward to watching the senior competition at the Final so that she could absorb as much as she could from the more seasoned competitors.

“Watching them skate live and in person was a big learning experience,” she said. “I noticed how they pushed through their programs, and how much more they perform when they compete.”

In Quebec City, Lam skated to a third place finish in the short program, but slipped to fifth place behind a strong trio of Russian ladies and the two-time Chinese champion Li Zijun.

“I achieved my goal of getting better in international competitions,” Lam said. “I’m pumped up about that. I realized that all of my hard work really pays off in competitions.”

A full time high school junior, Lam is of Chinese and Cambodian ancestry. She carries a 4.8 grade point average, and believes that focusing in on the task at hand is what keeps her successful both on and off of the ice.

“I train every day from 5:30 until 7:15 in the morning at Westminster Ice, and then I go to school,” she explained. “After school, I head back to the rink for more training, and I get home by 4:30. Because my day is so packed, I have learned that I need to focus really hard on what I am doing at any moment so that I can make the best of the time I have to do it.”

At school, Lam fills her day with advanced classes such as French III, Honors English and Trigonometry, and AP U.S. History. She has recently learned that she has been named to 2012 Scholastic Honors Team, and will be honored at an on-ice ceremony at the U.S. National Figure Skating Championships later this month in San Jose, Calif.

“It’s really nice to be recognized for academic achievement,” she said. “U.S. Figure Skating doesn’t just focus on us as skaters, they encourage us to be just as successful off ice.”

Lam has started to think beyond high school, and hopes to attend college close to her southern California home so that she does not have to make a change in training environments.

“I’m thinking that I might major in the sciences, but I am keeping my options open,” said the scholar-athlete. “I am looking at USC among other schools, but I definitely want to stay close to my training base.”

First drawn to the ice by watching her older sister, 20-year-old Nina, Lam has trained with Chapman and his wife, 1976 Olympic silver medalist Dianne DeLeeuw-Chapman, for her entire 11-year career.

“I think that it’s very easy to train with my coaches because we work together,” Lam explained. “I have a voice in my training, and I like that we collaborate. It’s also pretty cool that Dianne is a (1975) World Champion and Olympic medalist.”

Chapman and DeLeeuw-Chapman are responsible for her daily training as well as her choreography. Chapman admits that Lam has been one of his easiest students to train.

“She is very atypical for a 16 year-old,” he said. “She is so hard working, and just does what she has to do with a positive attitude.”

For now, Lam is looking forward to competing in San Jose, and hopes that the contest will be her coming out party of sorts.

“I think that this could be my time,” Lam stated. “I train really hard, and I am doing everything that I can to make sure that my programs are looking great. I’m ready to compete.”

She is also excited to see one of her childhood role models—nine-time U.S. Champion Michelle Kwan, get inducted into the U.S. Figure Skating Hall of Fame in San Jose.

“When I was little, we would always watch her skate on TV,” she said. “I look up to her for achieving all that she did and still does. Skating in a competition where she will be honored is exciting.”

In preparing for San Jose, Lam has been putting in the work, focusing on the usual suspects that a skater attends to when moving up the competitive ladder.

“I have been working on performing more, and have been trying to improve the components in my programs,” she said. “I have really been focusing on my speed and adding transitions. I hope for a high placement, and I would love to get named to the Junior Worlds team.”