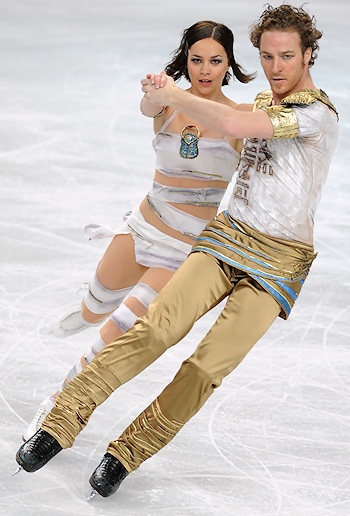 Tension was high in the ice dance competition. The favorites, Pechalat and Bourzat, had lost to Bobrova and Soloviev in the short dance, and the teams from fourth through seventh were separated by less than one point. Anything seemed possible at the Motorpoint Arena in Sheffield, and there was a lot of movement in the standings.

The French had announced that they weren’t willing to give up and went out with determination. Their Egyptian free dance, entitled “The Pharaoh and His Mummy,” was full of energy, highlighted by beautiful lifts and fast paced step sequences. Their ending was emotional with a long hug.

Pechalat, 28, and Bourzat, 31, picked up a level four for the lifts and the spin, while the circular steps and twizzles were a level three. The diagonal steps merited a level two. The Grand Prix Final bronze medalists were ranked first in the free dance with 99.29 points, and overtook the overnight leaders with a total of 164.18 points.

“We’re pretty happy at this moment,” Bourzat said. “After the hard beginning with the short dance, we just had to go on the ice and fight. We were the reigning European champions and there is no way we would let go of this. We trained to get more relaxed on the ice and we went out with anger and determination.”

“It is easier to attack than to defend,” added Pechalat. “It was very important for us to win. Also we were thinking of Worlds where we want to take a medal.”

Bobrova and Soloviev put out a smooth performance to Walpurgisnight, producing difficult lifts and a level-four spin, but Soloviev made an error on the twizzle that was graded a level two. The circular footwork was a level two as well, while the diagonal got a level three.

“We skated well overall technically and emotionally,” said Soloviev, 22. “Unfortunately, I made a stupid error in the twizzle series – I didn’t grab my leg. It happens.”

“We didn’t feel pressure after being in the lead,” Soloviev added. “We just wanted to skate as well as we could, technically and emotionally. The second place is also very good.”

His partner was happy with the performance as well, but didn’t quite agree about the pressure.

“For me personally it was our best performance of the season,” said Bobrova, 21. “It wasn’t easy to skate. It put a little pressure on us that we stood in first place, although it was nice. I enjoyed skating today. “I think we proved in the short dance that we can compete with the winners.”

Soloviev pointed out that there are three medals – for the short, free dance and the overall result, and that taking gold in one segment was a progress compared to last year.

Ilinykh, 17, and Katsalapov, 20, stood in seventh after the short dance and had nothing to loose. The Russian silver medalists went all out in their passionate Ave Maria free dance, dancing with emotion and power. Their lifts, the spin, and twizzles merited a level four, while the circular steps earned a level three and the diagonal a level two.

At the end of the program, Katsalapov pumped his fist and lifted up his partner, whirling her around in joy. The Russians posted a new season’s best with 93.63 points for the free dance, and leaped from seventh to third at 153.12 points. It was their first medal at the European Championships following a fourth-place finish in their debut one year ago.

“We went out in a fighting mood, ready to give it all we have,” Katsalapov said. “We knew we had a chance (to medal) and tried to concentrate on us and on the feeling between us.” Katsalapov said.

“We are very happy with our experience today,” added Ilinykh. “It is a great feeling. After we were seventh in the short dance, we had nothing to lose.”

While they waited for the final result, Ilinykh found it hard to believe they got the bronze. “At first I didn’t want to put my dress on (for the victory ceremony). We waited for the British team to finish their performance.”

Anna Cappellini and Luca Lanotte of Italy probably had the toughest moment of the evening to live through as they finished off the podium by a mere 0.03 points, coming in fourth with 153.09 points. Their cute dance to La Strada was very strong as well. They picked up the same levels as Ilinykh and Katsalapov, and got a slightly higher technical score with the Grades of Execution (GOE), but the component score was a little bit lower.

“Our performance was amazing,” Lanotte, 26, said. “We always try to challenge ourselves and today we won.”

“In the short dance we were perhaps too nervous and trying too hard,” Cappellini, 24, noted. “Tonight we promised ourselves to just feel the music and try not to worry about anything else. In terms of the points, I think it really paid off.”

Russia’s Ekaterina Riazanova (20) and Ilia Tkachenko (25) turned in a technically solid performance of their romantic dance to The Snowstorm, and had the highest technical base value of the top five teams thanks to six level-four elements and the two level-three step sequences. However, their component score was lower, and they dropped from third to fifth at 152.22 points.

“I think we did quite well,” said Tkachenko. “We skated very clean and it was fun.”

“I don’t know what changed in this performance,” he continued. “We skated the same way that we did in previous competitions, but today we got a better result. After this event, we are going to have a small vacation and then we will focus on preparing for the World Championships.”

Penny Coomes and Nicholas Buckland of Great Britain, both 22, were last to skate and ended the evening with a dynamic Elvis Presley Medley to the delight of the home crowd. They too, picked up excellent levels for their elements, and finished sixth with 145.31 points.

“We feel really pleased,” said Coomes. “It was so much fun. It’s our best European result by 10 places. We knew the top five places were just about set, so we set our goal to fight for that sixth place and we got it. We’ve just had a great time. Being on the practice ice with the top couples has been such a privilege.”

“We’ve worked amazingly hard,” added Buckland. “We wanted to work harder than everybody else and that’s why we’ve seen such improvement. Now we’ve got to do the same going into Worlds. This competition has been amazing. For a start, we’ve never been in the last group before, let alone skated last. Then to come on after the build-up with the battle for the first two places and then the crowd being so fantastic – it’s been great.”

France’s Pernelle Carron (25) and Lloyd Jones (23) came seventh with their Gershwin Medley and skated well despite the fact that Jones was fighting a cold and looked very pale. He did not pass by the mixed zone.

“Lloyd is with the doctor as he has not been feeling well all day,” Carron explained. “I think he has a cold. But we are very happy with our skate because we did not do this program in competition at the beginning of the season. We only had three or four weeks to get this program back ready for competition. It was not easy to prepare it, but it is so enjoyable.”

German Champions Nelli Zhiganshina (24) and Alexander Gazsi (27) overcame a shaky start into their Romeo and Juliet program when Gazsi slipped and fell right at the beginning, however, they completed all their elements and earned six level fours and two level threes to finish eighth.

“I just got caught on something when I fell,” Gazsi explained. “That little error probably cost us one placement. We could have probably beaten the French (Carron and Jones) I think, but who knows what would have been and could have been.”

“Things like this are rather unexpected in ice dancing,” he continued. “It’s stupid this happened right at the beginning too, but then again, after that the pressure fell off our shoulders, and we just skated. All you can do is get up quickly and skate on. Overall, we’re happy it’s over now. It was a very, very long competition and we’re very happy we did it.”

Lithuania’s Isabella Tobias and Deividas Stagniunas slipped from fifth to ninth after she stumbled on the twizzles in their entertaining Rock’n’Roll medley.