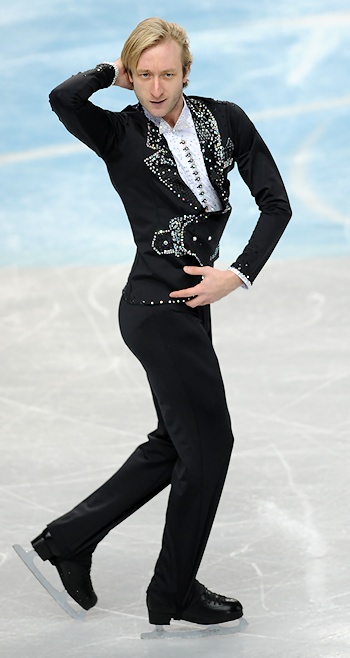 Overnight leader Artur Gachinski settled for the silver, making it one-two for Russia in the Men’s. It’s the first time since 2004 that the Russian men took two medals at Europeans. Defending Champion Florent Amodio of France moved up from fourth to claim the bronze.

Plushenko underlined his status as a legend in Sheffield. The 29-year-old defied the naysayers and overcame a knee injury to give a strong performance.

The 2006 Olympic Champion opened his Tango de Roxanne with a solid quad, followed by two beautiful triple Axels and three more triples. All jumps had excellent quality, except for the last double Axel, which was landed on the toe pick.

The three-time World Champion earned a level four for the flying sit spin and camel spin, as well as a level three for the combination spin and footwork. His joy and excitement was evident throughout his choreographed step sequences. The reward was a new personal best score of 176.52 points and a total score of 261.23 points.

“I’m so happy with my performance because I did the whole program clean,” said Plushenko. “I did the quad and I skated with big emotions. Like a real Plushenko! I was very happy. I feel like I did maybe 8 years ago. It is my seventh title and I wrote a little bit of history. I am proud of myself.”

Plushenko was unable to do the quad in the short due to the pain in his left knee, but on the day in between the short and the free, his condition improved.

“I decided yesterday in the practice that I was going to do the quad,” Plushenko explained. “I tried it not directly, but I tried first two triples and when the knee was okay, I tried the quad.”

Overnight leader Gachinski dealt well with the pressure and nailed a quad toe-double toe-double loop combination, another quad toe, and five triples in his program to Interview with a Vampire. The World bronze medalist scored 161.47 points for a total of 246.27 points. He finished second in the long and slipped to second overall.

“I did everything I wanted and I landed two quads in the free skating for the first time,” the 18-year-old commented. “I am very pleased with what happened today. To come second in my second Europeans is a big step forward for me. I got a season’s best and a high score.”

Following the rather unsuccessful start of the season, Amodio made a lot of changes. He not only ditched the short, but also changed most of the music for the free program. French composer Sébastien Damiani composed the piece Memories of Sobral for him, a reference to his place of birth in Brazil.

Amodio’s program included two triple Axels and four more triples, but he doubled his planned quad Salchow. The Frenchman appeared much more confident than in his previous competitions, and had a lot of energy in his last step sequence. He earned a new season’s best with 155.70 points and moved up one spot to third overall with 234.18 points.

“It was a difficult beginning of the season and I am proud of myself and my time now,” shared the 21-year-old. “I worked really hard and now I feel free. I’m very happy to be part of this podium.”

“I sacrificed a lot to train in Moscow, and my dream is to get more medals and work hard and do a better job,” Amodio added. “Now I have to focus on Nice, which is my main goal for the season. There is still a lot of work to be done. I feel that I can go to Nice calmly and just do my job.”

Michal Brezina from the Czech Republic was edged off the podium once more and finished fourth. The Skate America Champion fell on a quad toe and doubled the quad Salchow, but hit seven triples. He tired at the end, doubling a Salchow and singling an Axel in his final jump sequence, but pulled up from sixth place with 229.30 points.

“During the first half of my performance I missed a quad, but I believe the second half was good,” said the 21-year-old. “I also missed two jumps of high value. Still, I’m happy with my skate and now I know what I have to work for the World Championship.”

“After missing the quad I just remember what my coach always tell me: go step by step and concentrate on the jumps and moves ahead of you,” Brezina continued. “After this competition I will get a week off and then go back to practicing to improve my jumps.”

Teammate Tomas Verner fell on an underrotated quad toe and singled his first Axel, but recovered to complete six triples in his program to Sing Sing Sing and La Vie En Rose. Nevertheless, the 2008 European Champion slipped from third to fifth with 225.36 points.

“I’m not very happy with my skate,” announced the 25-year-old. “It was a disaster from beginning to end. I struggled with the triple Axel, and the rest of the program was awful. I knew from the beginning I had lost the podium. I know you should put this behind you, but I couldn’t. But I’m Czech. I never give up. Wait for Nice.”

Javier Fernández was touted a top medal contender following his strong Grand Prix season, however, the Spaniard couldn’t hold it together. He landed his quad toe and Salchow at the beginning of his program to a medley of Verdi operas, but missed the take-off of his first planned triple Axel, popped the second Axel, and stumbled on other jumps. The 20-year-old finished sixth with 222.26 points.

The usually chatty Grand Prix Final bronze medalist was so disappointed that he didn’t stop by the mixed zone and left without comment.

Samuel Contesti recovered from his disastrous short program with a six-triple free skate to French chansons. He moved up from 11th to seventh overall.

Brian Joubert started well into his Matrix free skating with a quad toe, triple Axel, and triple flip, but then disaster struck again.

The French national champion stumbled on an underrotated quad toe and his bootstrap came loose. He pulled up his pant leg, but it came down again and distracted him, causing him to stumble on a triple Lutz and loop.

The three-time European Champion came in eighth, and left Europeans for the first time without a medal after collecting ten medals in ten consecutive appearances.

“The strings that hold the pant leg on to the boot just got loose,” the 27-year-old explained. “So for half of my program I was of course worried to skate in this costume. I felt a little silly to skate with a pulled up pant leg, but I had only one second to decide what to do and this seemed the best option.”

“I am really satisfied with how I skated,” said Joubert. “Of course there were some mistakes, but I am really proud of my performance. I was crazy enough to put in the second quad, but I wanted to try it. I had no combinations and I lost a lot of points, but overall this was good for me to get ready for Nice.”

“My preparation has been going well,” he added, “but the time was a little too short. Now I have one and a half months left to get ready for Worlds.”

Joubert also had to deal with the withdrawal of Kevin van der Perren who would have skated first in the warm up right before him.

“He (van der Perren) told me in the dressing room that there was a chance for him to withdrawal, so I adjusted my warm up. In fact, I prepared as if I was to skate first in the warm up. He showed great sportsmanship for telling me, and I want to thank him for that. Not everyone would have done that.”

Van der Perren decided to withdraw right after the warm up. The 29-year-old had hurt his wrist in the fall in the short program.

Van der Perren wanted to conclude his career at the European Championships.