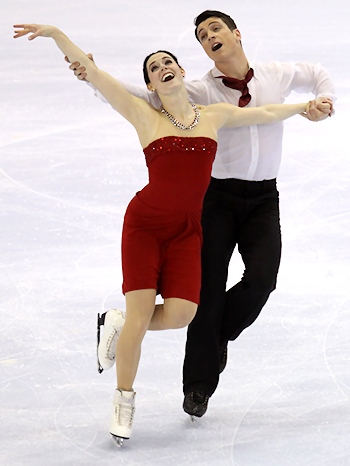 Tessa Virtue and Scott Moir (WO) perform their Free Dance at the 2012 Canadian Figure Skating Championships.

The outcome of the senior free dance at the 2012 Canadian Figure Skating Championships was one of the most predictable results of the event, but it was also one of the strongest and most exciting competitive segments thus far. All five dancers in the top flight gave fantastic performances to stay in the top five, securing their placements on the National Team.

Tessa Virtue and Scott Moir (WO) won their fourth Canadian championship, and of course they did so with a beautiful free dance and a huge score of 111.61. Initially, the Olympic champions seemed a little disappointed with their score—they had topped 112 at the Grand Prix Final last month—but Moir put the moment into perspective.

“We didn’t really care [about the marks], to be honest,” Moir said. “We were all about what we wanted to do today and we were really happy with our skate. I wasn’t really happy about that time deduction [extended lift] because I should have my lifts under time by January, but I’ll work on it.”

While the team wanted to give the Canadian audience a fantastic performance of their free dance this week, a fourth Canadian title is not where they want to peak this season. They are looking ahead to the Four Continents and World Figure Skating Championships.

“We’re happy to be right where we are,” Virtue said. “We’re happy, we’re healthy, we’re training really well, and I think we have a whole plan in mind and we’re going to peak at the right time. There’s a lot of strategy behind that and we’re excited. This is what we love.”

With good feedback on the changes that they made to their programs, Virtue and Moir are headed to Colorado Springs feeling confident and expecting a victory.

Kaitlyn Weaver and Andrew Poje (NO) also picked up a burst of confidence in Moncton. Fresh off a fourth-place finish and an incredible free dance at the Grand Prix Final, it might have been intimidating to come into the Canadian Championships with pressure to top that. However, Weaver and Poje looked absolutely secure in their Je Suis Malade free dance that scored 106.26—only five points back from the leaders.

“We’re definitely happy with the performance,” Poje said. “It felt better than the Final, but different.”

“We did exactly what we wanted to do,” Weaver added. “We just checked off each element; each moment we had, we shared.”

Like Virtue and Moir, Weaver and Poje have adopted a world-class mindset. While they are pleased with what they put on the ice this week, they are also looking further ahead. Last year, they surprised even themselves by accomplishing their goal of reaching the top five at the World Championships, but this year, they truly believe that the podium is a possibility.

“I think that anything is possible,” Weaver said. “We train with the French team, Nathalie (Péchalat) and Fabian (Bourzat), and we’re both going for the same thing. We push each other every day and I think it’s going to come down to who has the best skate.”

Piper Gilles and Paul Poirier (CO) may have actually been the happiest skaters on the podium on Saturday night. The smiles never left their faces, from the moment they ended their free dance, through seeing their free dance score of 100.76, to receiving their bronze medals. When they paired up this summer, standing on the podium in their first season was a crazy dream, but as the season progressed, they began to see it as a real possibility.

Gilles will be released from U.S. Figure Skating in May, so they are not eligible to compete for Canada at the Four Continents or World Championships this year. This relieved some of the pressure at this event, and they were able to just skate for themselves. The strategy paid off, and next season, Gilles and Poirier will likely be able to hit the Grand Prix circuit.

Since the bronze medalists are not eligible to continue the competitive season, the third world team spot will fall to the fourth-place finishers, Kharis Ralph and Asher Hill (CO).

After a season with plenty of ups and downs, Ralph and Hill were thrilled to come through with a passionate and clean performance of their tango free dance in Moncton. Their 88.59-point free dance was only ranked sixth on the day, but their total of 147.51 allowed them to hang on to fourth place.

Only about a point back were Alexandra Paul and Mitchell Islam (CO), with 146.48 points overall. Their 89.18-point free dance to Tonight was ranked fourth and was filled with emotion. Paul and Islam had lovely flow over the ice and their lifts seemed to float out of the choreography, but the team still has an opportunity to develop more power and presence in their skating.

Skating in the earlier group of competitors in the afternoon, Nicole Orford and Thomas Williams (BC/YT) turned in a fifth-place free dance to Gone with the Wind, but ended up just a point out of the top five.