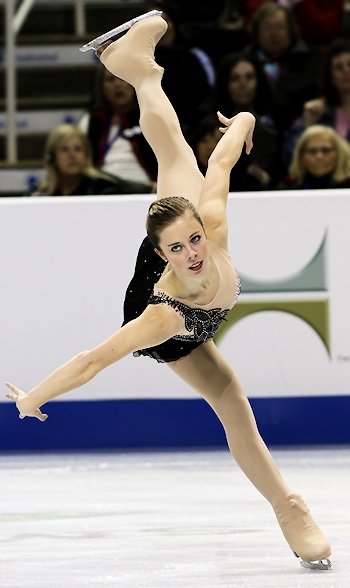 Ashley Wagner performs to the "Black Swan" at the 2012 U.S. Figure Skating Championships.

Before the 2012 U.S. Figure Skating Championships, 20-year-old Ashley Wagner made some pretty bold statements about how things would shake out this year.

Often described as the ‘almost girl’, Wagner said that she would cast away her short program demons and win her first U.S. title in San Jose. And she did just that in front of a very welcoming crowd of spectators.

“I’m really glad that I was able to back up my statements,” Wagner said after the competition. “I would be a horrible person had I not been able to. I wasn’t being cocky—I was just saying what everybody else was thinking instead of putting on an act. I don’t think anybody comes to the national championships to not win the gold medal.”

Skating to music from Black Swan, Wagner had to contain her smile as she took her starting position in order to set the off-center tone for the program. Though far from flawless, the program was still the most inspired and consistent of the evening. The gold medalist completed six triple jumps in all—her lone mistake being on a popped triple Salchow.

“I think that tonight wasn’t my best night, but it was what I needed in order to reach my goal,” Wagner explained. “My training really served me well tonight except on the Salchow, of course. This medal is physical proof that everything that I gave up was worth it. A huge weight has been lifted off of my shoulders.”

Wagner scored a career-best 187.02 points in the competition, and is assured of a spot on the two woman World Championships team.

“I was on the team that lost us a third spot (in 2008), and I want to be part of the team that gets it back,” Wagner said to applause. “We shouldn’t have to worry about getting in the top two here—American ladies are strong and can compete with the top skaters in the world. We should be worried about placing in the top three.”

Defending champion Alissa Czisny struggled throughout her Valse Triste program, but was able to hang on to win the silver medal.

“Tonight was not my best, but I am proud of myself because I fought for it,” said the 24-year-old. “I never gave up.”

Czisny appeared nervous from the start of her program, and never really got her skating legs beneath her. She was credited with four clean triple jumps, but fell on a under-rotated Lutz.

“It definitely wasn’t what I wanted to do,” she said of her performance, “but it got me where I wanted to be.”

Where Czisny wanted to be was in contention for the other spot for the World Championships team that will compete in March in Nice, France. At press time it was still unknown who would be making the trip. Even so, Czisny scored 180.00 points in the competition.

Falling—quite literally—from first after the short program to third place overall, Agnes Zawadzki had the kind of night that a skater wants to forget about. Her Rhapsody in Blue program simply wasn’t enough to keep her atop the standings.

“I’m disappointed on the second half of the program,” said the 17-year-old. “It didn’t go as I planned it would go. I’ve been training it a lot better. It’s frustrating when you know you’ve trained better than that.”

Zawadzki started out strong—opening with a nifty double Axel-triple toe loop combination, but later fell on two triple jumps and popped a third into a double. Her free skate was judged the seventh best of the night, but her lead from the short program kept her on the podium. She scored 174.10 points.

Caroline Zhang, the 18-year-old ‘has been’ from Brea, Calif., rebounded from two consecutive nightmarish U.S. Championships to get back to podium. With one of the most well received programs of night, Zhang brought the crowd to its feet with her beautiful closing pearl spin that seemed to go on for hours.

“It was definitely a good experience for me because I managed to get myself back on track mentally,” Zhang said with a smile. “It was the best performances I could have put out, but for me, this is a huge step for building toward the future. It’s encouraging for me to do better next year.”

17-year-old Christina Gao continued her streak of finishing in fifth place at nationals for the third straight year. The Canadian-trained skater finished with 166.36 points.

Rachael Flatt, last year’s silver medalist rebounded from a ninth place finish in the short program to finish in sixth.

Olympian Mirai Nagasu continued her downward spiral in the standings and ended up in a disappointing seventh overall.