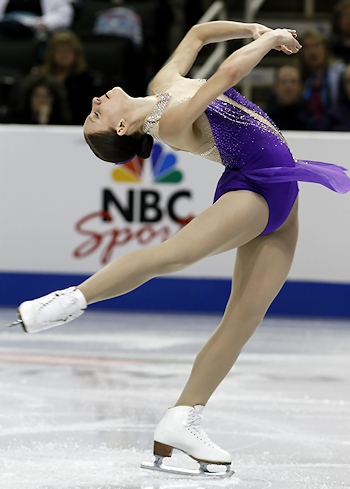 Agnes Zawadzki performs to "Harlem Nocturne" and "Whatever Lola Wants" at the 2012 U.S. Figure Skating Championships.

It was a spectacular night for the American ladies at the 2012 U.S. Figure Skating Championships, with just about every competitor fighting for the coveted title. In the end, it was 17-year-old Agnes Zawadzki who leads the way, skating a spectacular program after contemplating the sport altogether at the end of last season.

“I just kind of lost my love for the sport for a while,” she said. “I wasn’t sure that I wanted to continue.”

Instead of quitting, Zawadzki decided on a coaching change—from Tom Zakrasjek back to her previous coach David Santee. The 2011 U.S. pewter medalist has seemingly made the right choice—electrifying the crowd with her sexy Harlem Nocturne/Whatever Lola Wants short program. Zawadzki opened with a triple toe loop-triple toe loop combination, and followed it up with a huge solo triple Lutz.

“I started to train better after a disappointing Grand Prix season,” she said. “A lot of my mental mindset has changed a lot since the beginning of the season. I’ve been working with a sports psychologist who has been helping me to find the fun with skating again.”

Zawadzki earned 66.24 points in the short program, taking a three-point lead into the free skate.

Defending champion Alissa Czisny finished in second place with her La Vie en Rose program, making only one mistake—popping her double Axel into a single.

“The program was good except for the hiccup,” she said. “I’m looking forward to competing Saturday in the long.”

Czisny, 24, opened with a triple Lutz-double toe loop, and earned level fours and positive Grades of Execution (GOE) for each of her spins. She carries 63.14 points into the free skate.

“Last year I was in second place after the short, so I am not in unfamiliar territory,” the two-time champion said. “My goal for Saturday is to make each and every element the best it can be and not worry about the result.”

Behind Czisny by just .08 points, 20-year-old Ashley Wagner backed up her pre-competition talk with a strong short program, ending her streak of bad luck at the U.S. nationals.

“It’s been four years since I did something even close to a clean short program,” she said with a sly grin. “I really just tried to focus on how I felt after I got off the ice from all of those (flawed) short programs. I thought of this as my second chance to do that perfect program and channeled that tonight.”

Wagner went clean in her Polluck short program, landing a triple flip-double toe as well as a triple loop. Her point count was 63.06.

“I’m in third place, and I have to have that drive to fight to get on the World team,” Wagner said. “(Coach) Nicks has helped me channel my intense desire (to win), and I will keep the same plan for the long program.”

Caroline Zhang, 18, finished in fourth place with her best short program in years, and attempted a triple loop-triple loop combination. The southern California native ended her program with a fantastic layback spin and a glowing smile. She scored 60.18 points, and is well within reach of a medal on Saturday.

Finishing in fifth place was Olympian Mirai Nagasu, 18, who struggled with the landings of her jumps, and looked somewhat annoyed just to be on the ice. She is a little more than four points behind Czisny with 59.02 points.