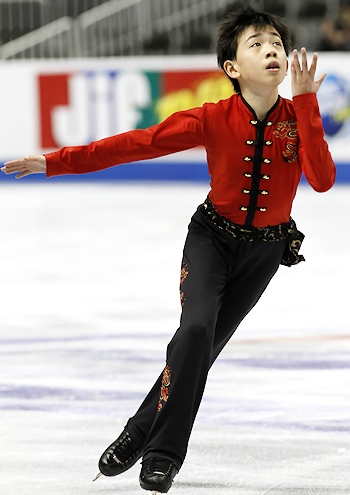 The youngest competitor in the novice men’s competition—11-year-old hometown favorite Vincent Zhou won the competition this afternoon at the 2012 U.S. Figure Skating Championships. The 7th grader equaled his ladies counterpart and broke the record for the highest score at the U.S. Championships by a novice male.

“It’s incredible,” Zhou said of winning the title. “It was a great skate and a lot of effort. All of my hard work and training paid off.”

Zhou scored 164.96 points, landing five clean triple jumps along the way. The crowd was on his side from the start, wishing the Palo Alto, Calif., native to do well.

“Skating here at home really put a lot of pressure on me to do well,” Zhou admitted. “But now I am basking in the glory of standing on top of the podium, which can be a once in a lifetime experience. Who knows if it will ever happen again?”

Zhou, who skated to Iron Monkey by James L. Venable and to Rising Sun by Kiyoshi Yoshida, has a love of Legos and Nerf guns when he isn’t skating.

“We had to limit his time with the Legos,” said his mother. “He is near-sited, and we want to make sure that he takes care of his eyes.”

However, like the little boy that he is, he gave his mom a hug and smiled sheepishly when she said she was proud of him.

“He makes me very happy and proud,” she said.

Finishing in a distant second place, was James Schetelich, who moved up from fourth place after the short program to capture the silver medal.

“I did every jump the best that it could be,” said the 15-year-old. “I actually said that to myself the entire way through the program. I stayed positive.”

Schetelich also landed five triple jumps in his West Side Story program, but the jumps weren’t as clean as the winner’s.

“I love triple-triples,” he said. “Hopefully next year I’ll be able to use them and may have some.”

Finishing with the bronze medal was another 15-year-old, Spencer Howe from Woodland Hills, Calif. After finishing in fifth place in the short program, Howe was confident that he could move up in the free skate.

“I thought that it was a good choice,” Howe said of his music Phantom of the Opera. “It was my first time doing a more dramatic piece. It made me a stronger skater.”

Howe finished the competition with 134.22 points.

Slipping from second place after the short program to fourth overall was another local skater, 14 year-old Piedmont, Calif., native Kevin Shum. The pewter medalist popped three jumps in his Nauscicaa of the Valley of the Wind program, and earned 132.68 total points.