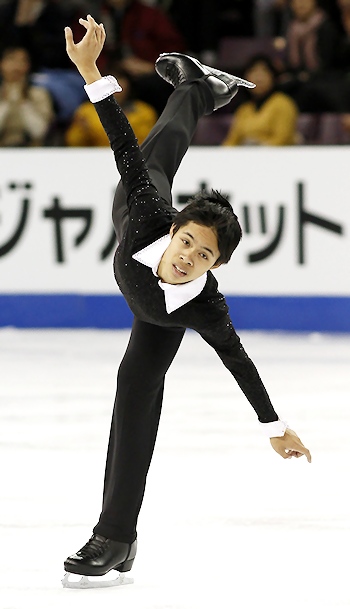 Christopher Caluza finished in 12th place at the 2012 Four Continents Figure Skating Championships—the highest placement by a Filipino skater in international competition ever.

It’s hardly a new trend in figure skating for a skater to shift from representing one country in international competition to another. In the case of 21-year-old Christopher Caluza, who is of Filipino descent, the decision to compete for the Philippines has been in the back of his mind for several years.

“I knew before the 2006 Olympics that I wanted to compete for the Philippines,” he said. “I wanted to take my time to get my skating to the level that would allow me to compete internationally.”

Caluza, a native of the San Diego, Calif., area, competed within the United States Figure Skating system from his first steps on the ice up until this season. Though he qualified for the U.S. Junior Championships twice, Caluza was unable to immediately make an impact on the national level at the ‘big’ nationals.

“I missed the national championships for five straight years,” he explained. “I wanted to get back to the U.S. Championships.”

So he kept trying, and in 2010, Caluza finally earned a trip to the big nationals by placing third at the Pacific Coast Sectionals on the junior level. He competed in and finished in eighth place at the U.S. Championships in Spokane, Wash.

The following season, Caluza tested up to the senior level, and was determined to skate at the U.S. Championships in Greensboro, N.C., with the big guns.

“I finished in 19th place in Greensboro,” he said. “It was fun to skate with the top skaters.”

Caluza made good on that promise that he made to himself years earlier.

“I decided that if I ever made it to nationals as a senior that I would try to skate for the Philippines,” Caluza admitted. “My parents are from there, and I wanted to represent their country.”

Since the 2011 U.S. Nationals, Caluza has increased the intensity of his training knowing that he may have opportunities yet to come his way in his skating career.

Caluza, who works with Natasha Bobrova, has continued to train in southern California, and believes that his training location has allowed him to understand what it takes to compete on an international level.

“I spent a lot of time with skaters who were competing internationally,” Caluza explained. “I paid attention to how they trained, and learned a lot from them.”

“My training is a lot harder now, and I know that it’s important for me to step it up in extra high gear.”

Caluza began skating at the age of seven, but on roller blades instead of ice skates.

“I used to skate with my cousins all the time,” he explained. “I would go to this roller rink in Chula Vista (Calif.) almost every weekend.”

When the rink closed, Caluza remembers crying and pushing his parents to find a new place for him to skate.

“They took me ice skating in La Jolla at Ice Town,” he said. “I tried imitating some of the moves that I saw skaters doing on TV, and a coach suggested to my parents that I get into lessons.”

One of Caluza’s first friends at the rink was 2010 U.S. champion Rachael Flatt.

“She skated at the same rink, and our families were friends before they moved to Colorado.”

In late November, Caluza headed to Manila to compete in the Philippine National Championships.

“The competition was in a mall, but to me, competition is always the same,” he said. “I focus on me and always try to do my best.”

When the competition was over, Caluza had a gold medal around his neck, and for the first time, the opportunity to compete internationally.

“I knew that because I had never competed internationally before that I had to meet the ISU minimum score to be able to go to the Four Continents Championships,” the gold medalist explained.

So, with just two senior B events left before the event in Colorado Springs, Caluza had to make a tough decision.

“The Bavarian Open was just one week before Four Continents, and I wasn’t sure that I wanted to compete,” he admitted. “Then I realized that I shouldn’t stop now. I should go for it.”

So Caluza headed to Oberstdorf, Germany, hoping to qualify for inclusion in the Four Continents Championships.

“It was a lot of fun,” he said. “It was nice to meet other people from other countries. I wanted to break 120 points, and I did that.”

Caluza won the bronze medal—the first medal of any color for a Filipino skater in any international competition, and was just .01 points behind the silver medalist. His score qualified him for the trip to Colorado Springs for his first ISU Championship.

“I came from Oberstdorf two days before the short program,” he said. “I was nervous and happy at the same time. I knew that I had to stay focused.”

Caluza finished in 12th place—the highest placement by a Filipino skater in international competition ever. As a result, Caluza has been asked to represent the Philippines at the World Championships next month in Nice, France.

“I’m filling out the paperwork now,” he said. “There’s no pressure at all because I will be competing against myself. When I put pressure on myself, it turns out bad.”

Though he is looking forward to competing in Nice, he is also excited to watch and cheer on his fellow competitors.

“(Daisuke) Takahashi is one of my idols,” he said. “I can’t wait to watch him skate, and hopefully meet him.”

In looking forward, Caluza hopes to continue breaking ground for the Philippines in figure skating.

“I want to compete the best that I can for the Philippines, and make them proud,” he said. “I want to continue to compete internationally, and ultimately I want to skate at the Olympics.”

After skating, Caluza hopes to stay in the sport of skating in one shape or another.

“I hope to coach someday and maybe choreograph,” he explained. “I cut my own music this year, and would like to start doing it for other skaters.”