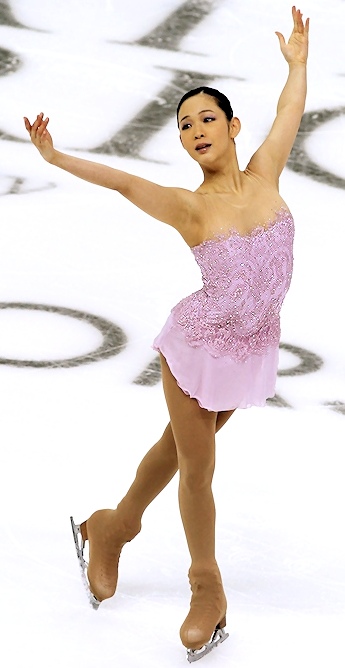 Though Haruka Imai is still in the shadow of the Japanese  figure skating stars, she is certainly one to watch. This season she made some changes in her life—the most importantly, the switching of  coaches and moving from her native Tokyo to the USA.

In September, Imai came to Detroit to train with 1994 World Champion Yuka Sato and her husband Jason Dungjen.

“Haruka was with us for a month in May,” Sato recalled. “I choreographed three numbers— long program, short program, and a show program. Then she went home. At the end of the summer I got a call. She wanted to be with us for the whole season.”

Imai, who suffered from a stress fracture in her foot during the summer and was off the ice for about two months, arrived in September in the USA.

“I decided to move because there are better practice conditions,” she explained.

Since then, the teenager has adapted well to her new environment.

“I am staying with a Japanese-American family,” she shared.

“We are fortunate to have a student who I think just turned ten,” elaborated Sato. “Her mother is Japanese and her father is Indian. The whole family speaks Japanese fluently and that is the family Haruka is staying with. She has adapted very quickly. The family has been so wonderful taking care of her with Jason and I being so crazy busy.”

In order to improve her English, the skater takes classes.

“My English improves every day,” said Imai. “I can understand most of it, but I don’t speak it so well yet,” Imai noted.

Additionally, she is continuing her studies at the Japanese high school over the internet.

“Sometimes I feel homesick, but I talk on Skype with my family,” she said. “I really like the life in America. The biggest difference to Japan is that I can fully focus on my skating. My coaches in Japan were in Nagoya but I am from Tokyo and I lost a lot of time because of traveling. Now it is only a five-minute drive to the ice rink.”

“Training-wise I think she is very happy,” said Sato. “It was a slow start in September because we couldn’t just start pushing right away due to the injury. We couldn’t have her practice any triple flips until late fall. It’s back in the program, but it took a long time. Some days she is sore, some days not so much, so we have to really watch carefully.”

The coach picked her music, Mendelssohn’s Song Without Words for the short program and a modern arrangement of My Fair Lady for the free skating.

“I wanted to do something fun,” Sato said. “She is so young—she is pure, she is talented. I always came in with sort of the idea on how to educate the younger skaters. Not only to give them perfect choreography, but to open up their avenue to the future and go through in the process. That’s what I’m doing with Haruka.”

“I wanted to work a little more on the basic skating skills,” she continued. “That’s the basic idea behind the short program, so we took a little slower piece. For the long program, I wanted to introduce her to a little bit more to the expression—to feel the music, the rhythm and changing rhythm throughout the program. I know there is a lot of room for improvement, but she is starting to feel the music.”

Imai started her season with a fourth-place finish at Skate America.

“I have mixed feelings about that because I didn’t skate so well,” she admitted.

She was sixth at her second Grand Prix in Moscow, Russia, but the level of competition there was higher. So far, she has one appearance at the ISU Four Continents Championships on her record when she placed fifth in 2010 with solid performances. Her only Junior Worlds back in 2009 weren’t as successful, as she came in 16th.

Imai then placed fourth at the Japanese National Figure Skating Championships—a big step forward for her following her 12th-place the previous year.

“I was glad I could do a great performance at Japan Nationals,” she said. “I got very nervous before my performances because I started to have some flash backs from last year’s nationals which I didn’t skate well. But I was able to believe in my self and skate well.”

“I think that Haruka skated very well at Japan Nationals,” said the coach. “It was very close for her to be fourth, but I am very still impressed with how she skated and very proud if her.”

Imai started skating rather late, at age nine, after going to the ice rink with her cousin.

“I liked the jumps right away,” she recalled. “I did a waltz jump, but my first Axel I did only after one year.”

The Japanese says she has no idols in the sport. Her parents have nothing to do with figure skating. They played tennis when they were in high school.

The 18-year-old names a spin as her favorite element.

“I like the donut spin into the Biellmann position,” she said. “The jumps are my weakness, especially when I get nervous. When I am too nervous I cannot control my jumps, but I like jumping.”

Imai names a positive mindset as a prominent trait of her character.

“I can rebound quickly from disappointment,” she noted.

Sato describes her student as someone special.

“She is very interesting. She is unique. She has her own little world that she lives in. It’s quite a dream. I don’t know how to express it. We smile when we talk about her. She just has her own flavor. She is a happy kid. She enjoys life. She doesn’t get affected by a lot of things. That’s good.”

The coach believes that Imai has all she needs for success in the sport.

“Certainly she’s got all the ability that she needs—jumping, spinning, skating skills. All those things need to be improved, but she has the ability and the talent. When you talk to her she has the ability to understand what we are trying to tell her. So I think it is all about taking time, practice, and teaching discipline. Hopefully she will be one of the very special athletes, competitors that we hope her to be.”

Imai will be competing this week at the 2012 ISU Four Continents Figure Skating Championships alongside teammates Mao Asada and Kanako Murakami.

“Haruka has still been nuturning her previous injury, so we can’t push her 100% yet, but we are working on small details on jumping skills and basic skating skills,” offered Sato. “We are hoping to be able to see these improvement at the Four Continents.”

“I will try to stay focused and skate my best at Four Continents,”  Imai said.