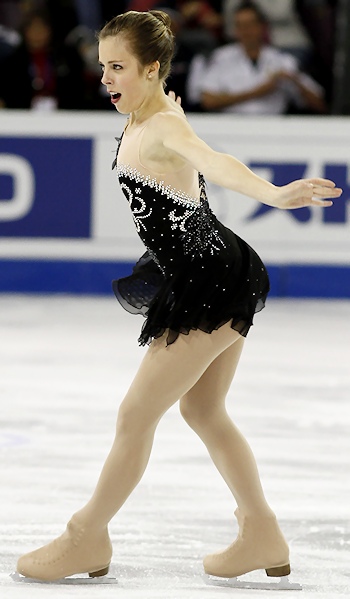 The American ladies made a pronouncement to the rest of the world last night—they are back, and they are ready to start winning titles again.

Ashley Wagner, fresh off of her win at the U.S. National Championships, threw her hat into the World Championships medals race by winning the 2012 Four Continents Championships title in Colorado Springs, Colo.

“[It] was an awesome performance for me—a personal best—and to receive that internationally is a huge accomplishment,” said the gold medalist. “Everything I did out there was solid and strong.”

Wagner performed a captivating program to music from the movie Black Swan, interspersing strong triple jumps between Philip Mills’s modern ballet choreography. She credits Mills and coach John Nicks for much of her success this season, and was eager to share the win with them.

“We wanted to create something that was very authentic,” she explained. “This program combines Phillip Mills’s choreographic excellence with Mr. Nicks’s awareness of the audience. For me, it is the perfect performance package.”

Wagner decimated all of her personal scoring records in this one competition, eclipsing her previous total score by more than 20 points. She was credited with six clean triple jumps on her way to her season leading total of 192.41 points.

“The next step is to learn how to take these great scores and compartmentalize (them),” said the 20-year-old. “It’s one competition at a time. I did a good job at nationals and Four Continents. As long as I can do the same thing, stay calm and focus on my performance and technical elements, I will be fine for the World Championships.”

Two-time World Champion Mao Asada turned in a strong performance, but is still building to regain her championship form. She collected her second consecutive silver medal in the competition, and sees much that can be improved heading into the World Championships.

“I’m very happy about succeeding on my triple Axel tonight, but I made several other mistakes,” said the 21-year-old. “I understand my result.”

Skating to Franz Liszt’s Liebestraum, Asada opened with her trademark triple Axel (scored as under rotated), and nailed a beautiful double Axel-triple toe loop combination. Her total score of 188.62 points is the second best for any lady in an international competition this season.

“I lost points on quality of jumps and that’s something I would like to work on before Worlds,” she explained. “I would like to land the triple Axel both in the short and free programs in Nice, and I’d like to fix the small problems in free program.”

USA’s Caroline Zhang moved up from fourth after the short program to capture the bronze medal after the free skate of her career.

“I’m happy to be getting back on the right track,” the 18-year-old said with her rediscovered smile. “This is really motivating me to work for higher scores next year. I didn’t care where I finished here. It was about putting out good performances so that I could build my mental confidence for next year.”

Zhang skated to music by Antonin Dvorak and brought life to what was a dismal competition to that point. Skating first in the final flight, the bronze medalist lit up the crowd from the start by landing five triple jumps and closing with her jaw-dropping pearl spin, which received the maximum points allowed for a layback spin.

“I was very happy with how I skated today,” Zhang admitted. “Something I wanted to do was to get those levels on spins and footwork. To get those was a big accomplishment for me.”

Zhang scored a total of 176.18 points in the competition, less than a half a point than her personal best recorded more than three years ago.

Finishing in fourth place was Japan’s Kanako Murakami, 17, with 169.32 points. Though the performance was a new season’s best for the 2010 World Junior Champion, she was one of many who struggled with the high altitude here in Colorado Springs. She was credited with four clean triple jumps, but failed to land her high scoring triple-triple combination.

“I’m very mortified about my triple toe-triple toe combination,” she said. “I haven’t made mistakes at practice on this element, but I made it at competition. My condition is gradually getting better so I’d like to achieve a perfect performance at Worlds.”

In her first season on the senior level, China’s Kexin Zhang fit right in among the top ladies in the competition placing fifth in this tough field. The 16-year-old finished in fourth place in the free skate, landing five clean triple jumps—including a triple toe loop-triple toe loop combination. Her total of 162.59 points is a new personal best.

“I am pretty pleased with what I did today,” she said. “I only regret that I missed one jump, but everything else was quite good. This is my first time at the Four Continents Championships, and to come in fifth is very good for me—especially since this is a senior level championship.”

USA’s Agnes Zawadzki, 17, had an up and down performance and held her sixth place finish from the short program. She finished with a season’s best 157.23 points.

“It’s a little disappointing because practice was a lot better,” Zawadzki said. “I think I need to work on getting it the same and having it click during competition instead of practice. Yeah, it’s a seasons best, but I had higher standards for myself.”

The Canadian ladies battled it out until the last note of their music for the one World Team berth, and national champion Amelie Lacoste, 23, came out on top by the slimmest of margins—.18 points more than Olympian Cynthia Phaneuf, 24. The two finished the competition in seventh and eighth, respectively.