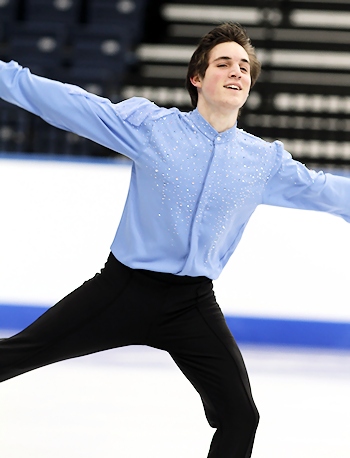 USA’s Joshua Farris leads the Men at the 2012 ISU World Junior Championships in Minsk, Belarus after the short program on Thursday. He is closely followed by China’s Han Yan and Kazakhstan’s Denis Ten, respectively.

“I felt really good about the performance,” 17-year-old commented. “I think a couple of things could have been better, but overall this was probably my best all year and I couldn’t ask for more.”

Yan hit a nice triple Axel, a triple flip-triple toe combination, a triple Lutz, and showed good flow in his program to Waltz No.2 by Dmitri Shostakovitch. That meant a new season’s best (74.88) for the JGP Final silver medalist who also received the highest component score.

“I performed up to my level today and I’m happy with that, the 15-year-old skater noted. “The spins could have been a bit better, though. Overall I think the level of the competition is higher than last year.”

Ten turned in an elegant performance to Rachmaninov’s Elegie op. 3. He landed a beautiful triple Axel, a triple flip-triple toe, and a triple Lutz. However, his spins let him down. While the change camel spin earned a level four, the flying sit was wobbly and the combination spin merited only a level one. The 18-year-old collected 73.78 points, four points lower than his season’s best.

“I am not too happy with my performance,” Ten admitted. “The spins didn’t work out so well. I hope to do better in the free skating.”

“I left the junior ranks very early and I missed juniors,” he answered when asked why he came back to the junior level. “This is only my third Junior Worlds. Although I have experience, I feel pressure. I want to skate well and in Kazakhstan we didn’t have yet a medalist, so it would be nice to win a medal and to do something for the history of Kazakhstan figure skating.”

USA’s Jason Brown currently sits in fourth place with a season’s best of 70.20 points. He showed off his musicality in his fast paced Tango Grand Guignol, but didn’t go for the triple Axel. The JGP Final Champion landed a solid double Axel, a triple flip-triple toe, and a triple Lutz. The flying sit and combination spin merited a level four, while the change camel (which was well done) only garnered a level two.

“I was really happy with how it went,” said the 17-year-old. “I wish I would have gotten all my levels. I kind of missed an edge in my camel which I knew at the time. This was the only thing I was unhappy with, but I felt good about it and I’m excited that I got a personal best.”

“It’s amazing to be so close (to the podium) and I just hope to skate how I have been training (in the free skating),” Brown said of the upcoming long program. “That’s all I can ask for.”

Brown is not planning to do a triple Axel in the free skate.

Russia’s Zhan Bush stepped out of his triple Axel and also did a three-turn between the triple flip and triple toe in his combination to score 65.21 points.

“I wasn’t nervous,” explained the student of Olympic Champion Alexei Urmanov. “Maybe I was too calm and there wasn’t enough adrenalin to give a clean performance. I think I still have a chance to move up if I do my job in the free and skate clean.”

He Zhang of China came in sixth with a clean performance to Blues Brothers and Sing Sing Sing. He produced a double Axel, triple flip-triple toe, triple Lutz, and fast spins for a score of 64.63 points.

Liam Firus of Canada also skated clean, however, his limited difficulty with a double Axel and a triple toe-triple toe didn’t allow him to finish higher than seventh (62.10).

The diminutive, but very lively Shoma Uno of Japan was 10th. He got an edge call for the triple Lutz and landed a triple flip-double toe.