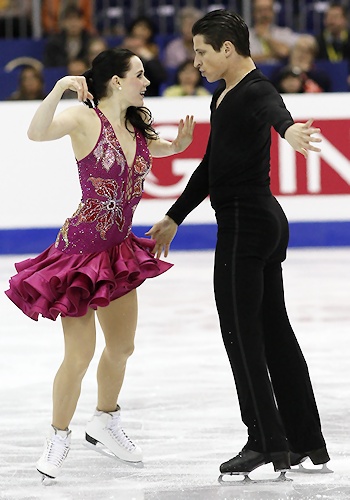 A battle for the lead in Ice Dance was expected to feature only two teams at the 2012 World Figure Skating Championships: the 2010 Olympic Champions Tessa Virtue and Scott Moir (CAN) and Vancouver runner-ups Meryl Davis and Charlie White (USA) with no other team having a say in the matter.

However, home favorites unexpectedly joined the fight. After the first stage of the ice dancing competition, Virtue and Moir lead by 1.33 points over Davis and White, while Nathalie Pechalat and Fabian Bourzat of France are only 1.85 points behind the Americans.

The comparison between the two top teams was made easier by the fact that the U.S. and Canadian teams performed back to back.

Virtue and Moir, who lost two out of three of their most recent competitions to their training mates, were in league of their own in Nice. While the technical panel found flaws in their execution of the rhumba pattern (both sequences were graded level three due to them missing the second ‘key point’ – a choctaw), the overall quality of their skating was a class apart—even from their perennial rivals.

Many dancers find it a challenge to adapt to a very different style of movement on the ice, but the students of Igor Shpilband and Marina Zueva nailed it perfectly, never falling out character. They posted their season’s best of 72.31 points.

“I thought we had a good skate tonight,” said Moir at the press conference. “We tried to perform like we do at home and to connect with each other. It’s always fun to skate in France with such an enthusiastic crowd, and we tried to focus on unison and got stronger the further we went into the performance.”

The team claims that despite their lead after the short dance, they are still planning to keep attacking tomorrow.

“When we were sitting in the kiss’n’cry waiting for the marks, we had agreed that no matter what the result would be, we will make no changes to our plans for tomorrow,” explained Virtue. “We feel very confident in our Funny Face program. Having had the full season, both in training and in competition to get the feedback, our approach is to attack, and not hold anything back. Our elements are so well trained and we can express, get into character, and really enjoy the moment.”

The skaters say that partial credit for their success goes to the entire training group back in Canton.

“We obviously have a unique situation,” said Moir, “but we’re really just thinking about our own performances. It’s nothing new for us to be competing against Meryl and Charlie and then train alongside them. We’re very fortunate to have them and the Shibutanis at our rink, and we’re able to push each other every day. We really wouldn’t be where we are today without them and I hope they feel the same way.”

In contrast to their training mates who have pretty much exceeded all expectations, Davis and White looked less sharper than usual and lacked their trademark flawless power today. They were still very strong and very fast, but the theme of this season’s dance does not seem to play up to their strengths the same way it does for the Canadians.

Both teams received identical levels of difficulty from the technical panel, however, the Americans made a slightly weaker impression on judges, picking up lower Grades of Execution (GOE) and program components scores. As a result, there is nearly a point and a half of a difference—quite a substantial margin for these two teams.

The skaters, however, believed this performance to be their best.

“We were really pleased with our performance today,” said Davis. “I think when we finish a performance and you’re pleased with the way everything went, that’s the kind of feeling we aim for. It was the best we’ve done the program all year. We were just focusing on each part of the program individually and portraying the excitement.”

The U.S. Champions were not discouraged by the fact that their score (70.98) was more than five points lower than their season’s best from the ISU Grand Prix Final (76.17) in December.

“As far as the scores go… over the years we’ve learned that scores are not totally within our control,” mused Davis. “Unfortunately, we didn’t get the levels we were looking for, especially for two rhumba sequences.”

“I think it varies from competition to competition and according to the panel,” she continued, “but I don’t think we have any regrets with how it went tonight. It was a bit disheartening to get those levels three, simply because we felt we nailed our edges and everything, but we thought the performance felt amazing.”

The team also plans to be in attack mode tomorrow.

“We really love our free dance,” said White. “We’re very excited to take the energy we had out there today and continue it on to tomorrow. It’s a fantastic crowd and I think they’re behind us. We feel our training has prepared us for this moment and we’re looking forward to getting out there.”

Pechalat and Bourzat had to overcome a serious obstacle to compete at their home World Championships. Two weeks before the competition, Pechalat broke her nose in an accident during training, and had to wear a protective mask afterwards. Looking at their performance, though, one would have never guessed that the skater is scheduled for surgery after the end of the event.

“I’m fine,” said Pechalat. “I mean my nose—it’s broken—what can happen next? I was so focused that my nose was the last thing I thought of.”

The students of Angelika Krylova allowed the widely enthusiastic crowd to carry them through the performance. They seemed to hit a perfect balance between keeping their focus on technical details and having freedom of expression, but Pechalat was obviously relieved once the last element – a twizzle sequence – was over and they were able to let go completely.

Ironically, the twizzles were the least impressive element in the dance as they only earned level three from the technical panel. In contrast, they were one of the few teams to get level four for both rhumba sequences. They scored 69.13 points.

“It was crazy,” said Pechalat about their performance. “We skated last and we didn’t know how our competitors had skated, but we knew it was up to us to do our job. We are relieved. And we never came as close to the top two as now. This gives us hope for tomorrow. Usually we were like ten points behind and no matter how well we skated in the free dance, we were unable to catch up.”

“We wanted to show our very best, to put out a technically strong short dance,” added Bourzat. “We’ll see what happens tomorrow. The free dance is our best program and we feel very confident with it, with the story, with our costume. We’ll try to go for more than third place.”

“The crowd was amazing, very motivating, you feel them when you get tired,” he added. “They were with us all the way through. We’ve never been this close to these two teams before and I think we’ll try to attack—we’re skating in France—to give our best, and to make it entertaining for the audience.”

A notch below the top teams, three other teams finished rather close to each other. Canada’s Kaitlyn Weaver and Andrew Poje are fourth with 66.47 points, followed by Russia’s Elena Ilinykh and Nikita Katsalapov (65.34) and Italy’s Anna Cappellini and Luca Lanotte (65.11).

The Canadians were the first team to put the audience on fire with their performance. They nailed every move in their dance and seemed to be constantly pushing forward with no need to take a breath anywhere during their routine. They slightly improved their season’s best to 66.47 points.

“It was definitely our best performance of the season,” said Weaver, “and judging by the audience’s reaction, we did a pretty good job. Our free dance is our favorite program to date and we’re hoping to show the love and passion of the story and do every bit of the program that we know how.”

“We definitely wanted to end this (short dance) program on a high this season and we feel like we went out and performed it—that was our main goal,” added Poje.

Ilinykh and Katsalapov, who skated first in the final warm up group, were confident and smooth, maintaining good flow across the ice and capturing the character of their dance perfectly. The team, which was prone to making mistakes in the past, avoided them this time and picked up quite impressive levels of difficulty. However, the judges did not like their execution of the pattern dance and penalized them with negative (-1) Grade of Execution both times. Nonetheless, the team improved their season’s best by four points and finished ahead of their teammates.

“It was not a perfect performance,” said Katsalapov.

“There is no limit to perfection, though,” added his partner. “You can always find something that needs improvement in your performance, but we felt that we did a great job today, so we are quite happy.”

“Nikita helped me a lot today,” she continued. “He helped me to focus, told me what to do. I did not think about placements or audience, I only wanted to skate well and do everything right.”

The couple told the press that the ice quality in Nice resembles one at their training base and that they had no difficulty skating here.

“It helped us that we got a chance to try this ice during the preliminary round,” explained Katsalapov. “The ice is soft here and I think it is good. Maybe other skaters need other types of ice, but this one suits me just fine.”

Cappellini and Lanotte have been trying to move from the ‘young and promising’ group to the list of major contenders for a few seasons now, and it seems that the students of Paola Mezzardi finally succeeded in doing it. They were sharp and entertaining and received high levels of difficulty for their elements.

“At the Europeans, we were so ready, maybe it was too much,” explained Cappellini. “It was mentally tough. We went for the medal for the first time and that was a mistake. We tried to stay calm and to keep a clear head for this competition. We prepared the same way. At Europeans we probably were skating for points too much. I am glad that we’re having the Free Dance tomorrow and the competition will finish earlier.”

“Today, we were trying to give the best performance not just thinking about the elements,” added Lanotte. “We are so satisfied with today’s performance, the way we used the music and the emotion we put into it.”

USA’s Maia and Alex Shibutani seemed to fall out of the judges good graces this season. The fact that last year’s World Championships bronze medallists faced a tough task of skating right after Virtue and Moir did not help their cause in Nice, either. The unfortunate draw seemed to have highlighted all their weaker points, no matter how small, while their best qualities did not look quite as impressive when compared to what the Olympic Champions were doing. They earned 62.35, three points below their season’s best, picking up level two for the step sequence and negative GOEs for the rhumba.

“We felt no pressure at all today,” said Alex.

“It is very rare that a couple that enters such a big championship for the first time wins a medal,” he added, referring to their last season’s bronze. “Today we just wanted to go out and attack. We are really happy with our performance and with the progress we’ve made during this season.”

Russia’s Ekaterina Bobrova and Dmitri Soloviev (58.29) struggled with achieving proper levels of difficulty in their dance and fell during a transition halfway through the program to finish behind U.S. debutants Madison Hubbell and Zachary Donohue (59.56). Russia’s Ekaterina Riazanova and Ilia Tkachenko round up the top ten (58.19).