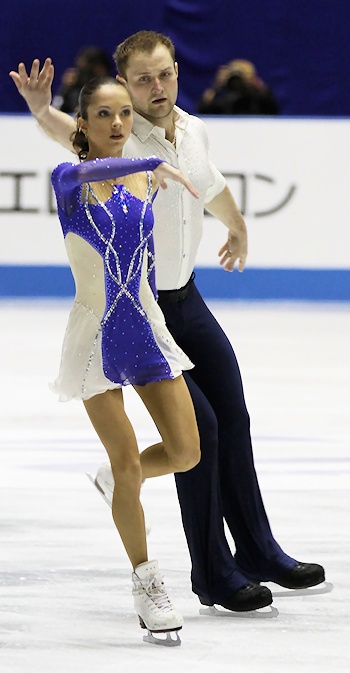 Vera Bazarova and Yuri Larionov of Russia performs to music from "Doctor Zhivago" at the 2012 World Team Trophy of Figure Skating.

Performing to Doctor Zhivago, Bazarova and Larionov opened with a triple toe, but were out of sync. A huge triple twist followed, but then Bazarova went down on the throw triple flip, and later underrotated the first jump in the double Axel-double Axel sequence. Nevertheless, the Russian Champions held it together and produced a throw triple loop as well as nice lifts. With 118.68 points the European silver medalists won the free skating and moved up to first with 189.70 points.

“We had one big mistake, the fall on the throw triple flip,” noted Bazarova. “This throw didn’t work at Worlds and now here we missed it again. We were calm. It is a technical problem and something we’ll work on.”

“We are very happy that everything is over now,” she continued. “We felt the support of the Japanese fans and the Russian team. They gave us a lot of emotions. We are very happy to have come first. The atmosphere here was different and we really enjoyed it.”

Duhamel and Radford landed a triple twist, side by side triple Salchows, and a throw triple loop and Lutz in their routine set to Viva la Vida and Yellow by Coldplay. The Canadian Champions also picked up a level four for the lifts, death spiral and spins, however, Duhamel stumbled badly on the triple toe. They scored 118.35 points and had 177.62 points overall to move up two spots.

“It was the best we could have done in this moment,” offered Duhamel. “Obviously, I had one little bobble, but to start out with a bobble like that and to do the rest of it the best we could is a really good feeling.”

“We were discouraged after yesterday,” she continued. “This skate is for us. It was a great way to end the season. Next year we’re going to take off right where we left off and build even higher.”

“We were just saying to each other, ‘enjoy the moment’,” added Radford. “We love this program and we knew it was going to be our last time performing it. We really enjoyed the crowd and enjoyed the energy. Of course there are always minor technical things that you want to improve, which we will be working on for next year, but we are really happy with the end of the season.”

Takahashi and Tran had an off-day. The opening triple twist was fine, but then both skaters fell on the side by side triple Salchows and Takahashi singled the planned triple toe. She also stepped out of the throw triple Salchow. On the other hand, the World bronze medalists were able to collect points for their level-four lifts, death spiral, and spins, and they landed the throw triple toeloop. With 112.64 points for the free, the World bronze medalists had to settle for third place at 177.56 points.

“My mental preparation was not as it should have been,” sighed Takahashi. “I’m very disappointed about today’s performance. I’d love to skate again if it was possible. Of course I’m not happy with today’s performance, but at least we could get decent points for team Japan.”

“Despite our early mistakes on the jumps, we came back strongly.” Tran noted.

U.S. Champions Caydee Denney and John Coughlin delivered a technically strong performance to Nessum Dorma, executing solid jumps and throws. Their spectacular carry lift at the end drew extra applause from the crowd, but the component score was not yet up to par with their technical ability, and the Americans finished fourth.

“We wanted to leave the season with a good taste in our mouths,” Coughlin told the press. “In front of such a big crowd, to skate like that and stay composed even as the crowd got excited, was a big wave of momentum we can ride into next year.”

“We skated pretty well considering the little training we’ve had,” explained Berton. “After Worlds, we took part in the ISU Pair Skating seminary in Berlin. We lost some points here and there, did some mistakes, but we are still happy.”

“It was great,” she said. “It is a shame that we finished last, but just being here was a lot of fun. Team Italy fought a lot. We were out of shape, but I think everybody was in the same situation.”

Daria Popova and Bruno Massot of France finished a distant sixth. The Russian-French couple just didn’t have the same degree of difficulty in their routine, and the death spiral and one lift didn’t fulfill the requirements and had no level. The highlight of their program was a triple twist (119.10 points).