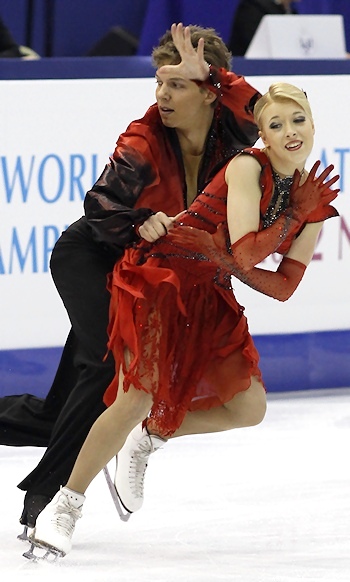 Russia’s Ekaterina Bobrova and Dmitri Soloviev are on the ice at the Olympic Stadium (known locally as Olimpiski) in Moscow, working on a pose under the watchful eyes of coach Alexander Zhulin and choreographer Sergei Petukhov. The two-time and reigning European silver medalists repeat a move over and over as Zhulin and Petukhov correct them and demonstrate to them what they have in mind.

Bobrova and Soloviev joined their new training group at the end of April and have been working hard since. Bobrova even cancelled part of her vacation in mid-May which she had planned long before she knew that they would switch coaches at the end of the season.

The decision to leave their coaches of twelve years, Elena Kustarova and Svetlana Alexeeva, didn’t come as a surprise to many observers. Although Bobrova and Soloviev defended their National title and the silver medal at Europeans, the season ended with a rather disappointing seventh place at Worlds. In Nice, National rivals Elena Ilinykh and Nikita Katsalapov were Russia’s top ranked team in fifth place.

“After Europeans we thought about changing something, but we didn’t have any concrete plans,” explained Bobrova. “We just wanted to talk to our coaches about making some changes. Then after Worlds, we decided that we were going to switch coaches.”

“We don’t have so much time left and we realized that we needed a fundamental change if we want to reach the podium at the Olympic Games in Sochi,” the 22-year-old dancer continued.

“They say that a new eye gives a new color,” added Soloviev. “Unfortunately, this was something we were missing from our old coaches.”

Change is what they are getting now.

“Sasha (Zhulin) teaches us a different technique,” shared Bobrova. “It is like we are learning to skate from scratch. It is very hard and sometimes we feel like we can’t skate at all, but our coaches are very supportive.”

Alongside Zhulin, the skaters are working with Oleg Volkov and they appreciate their new training environment.

“We really like our new training group,” said Bobrova. “There are no tensions and we are getting along with everybody. The time passes so quickly during training.”

While the skaters had given thought to Zhulin as their new coach, they were also considering moving abroad.

“We could have moved to another country, but we wanted to stay in Russia and Sasha has a strong training group now so that we think it is a good choice,” Bobrova explained.

Soloviev has a wife and son in Moscow, which helped to finalize the decision, and the dancers joined Zhulin without any trial practice.

“We already knew subconsciously it would work out,” Bobrova commented.

Even after just a short time with their new coaches, Bobrova and Soloviev are looking different, and this is exactly what Zhulin wants.

“When they asked me to take them, I hesitated and I was thinking about it for half a day. I like difficult tasks and so I agreed,” Zhulin said with a smile. “I think they have potential, but I want to change everything—their style, their costumes, and their hairstyles. It will be hard to do in one season, but we’ll try.”

“They have good basics and they are incredibly hard working,” Zhulin concluded. “My job is now to correct some technical aspects and give them this one million dollar look. I want them to change completely—just the names will be the same.”

This complete change also means a departure from the style of programs they have had in the past. Zhulin has already selected music for the free dance, however, he’s not ready to reveal it to the public yet. The skaters love it.

“We wanted to try something new,” said Soloviev. “When Sasha suggested this piece, we liked it right away. I think when you get goose bumps listening to it, then it is something that can work.”

“It is an interesting idea and something we never did before,” the 22-year-old continued. “Also, the way the coaches are explaining technical things to us is easy to understand. Sometimes it feels still a little uncomfortable, but it is in fact easier to skate. We think working with Sasha gives us a lot technically, artistically and psychologically.”

After working with female coaches for the past twelve years, the skaters now have a male-dominated team around them.

“Dima is really happy about it,” said Bobrova, laughing.

“Yes, I think it is harder to work with women,” her partner admitted. “The male partner has to do a lot of things and it is important to understand all the details and how he has to work within the pair. Maybe it is easier for me to communicate with men about that.”

Bobrova feels that the male perspective is very useful for her as well.

There is no real vacation for the team during this off-season. Bobrova has a few days off, but then the team plans to train in early June while the other teams have their vacation. From June 20 to July 28 the whole group will attend a summer training camp in Latvia before returning to their training base in Moscow. At the Russian test skates in September, Zhulin wants to present the ‘new’ Bobrova and Soloviev to the public.