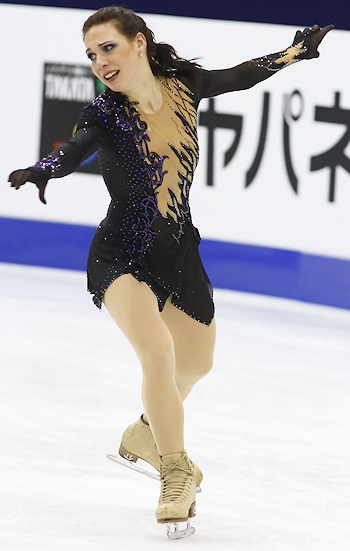 Russia's Alena Leonova performs to "Adagio for Strings" and "Requiem for a Tower" at the 2012 World Figure Skating Championships.

Since Irina Slutskaya’s retirement in 2006, there has been a medal draught for Russia in the ladies figure skating discipline. However, Alena Leonova became the first of an up-and-coming group of Russian girls that has taken six medals at Junior Worlds since 2009.

Leonova herself was the first Russian lady to capture the Junior World title in eight years when she won in 2009. Now, at age 21, she concluded a successful season when she took the World silver medal.

“Now, after some time has passed, I realize that I am the World silver medalist,” said the Russian skater. “People are congratulating me for this success, which is very nice. It was a surprise to me that I finished second in Nice, but it makes me very happy.”

Leonova especially sparkled in her Pirates of the Caribbean short program in Nice and placed first in this segment. However, despite a solid free skate, she slipped to second and was overtaken by Italy’s Carolina Kostner.

Just before the World Team Trophy, Leonova came down with flu symptoms and wasn’t able to skate her best in Tokyo. Nevertheless, she feels very positive about her season.

“I almost achieved everything possible for me except for the European Championships,” she noted.

After winning the bronze medal at the Grand Prix Final, Leonova was rated as a top contender for Europeans but only came in seventh after struggling in her programs.

“Actually I feel that the hardest task was to win Russian Nationals,” said Leonova, “but then I didn’t manage to take a medal at European.”

The Russian National title has her eluded as well. She was a silver medalist in 2010 and 2011 and a bronze medalist in 2012. The tough competition in Russia is the reason why Leonova feels that Nationals is the hardest event to win. Moreover, the 21-year-old skater hears from Federation officials and read in the Russian press that her days are numbered once the “wunderkinds” such as Adelina Sotnikova, Lisa Tuktamysheva, and Julia Lipnitskaya hit the senior ranks.

As a result, medaling at the Grand Prix Final and at Worlds was certainly a special satisfaction for Leonova.

“At Worlds I really proved that I can achieve something,” pointed out Leonova. “I competed against them (the younger girls) throughout the season and I beat them in some competitions. Therefore, I don’t worry too much about them.”

Sotnikova and Tuktamysheva will be old enough for senior-level championships in the upcoming season.

“Our federation constantly reminds me of them and I have to compete against little girls all the time,” Leonova offered. “On the one hand that is a little irritating, but on the other hand I just have to skate well.”

This past season was her first under new coach Nikolai Morozov, however, the skater kept in touch with long-time coach Alla Piatova who helped out as well. Leonova feels that most of the changes she went through happened inside herself.

“Nikolai Alexandrovitch (Morozov) made me more confident and I am skating more freely and relaxed,” Leonova observed. “I became more self-dependent as well. Before, there was always someone at my side who told me what to do, but now I’m doing a lot of things myself and I am also living by myself in Novogorsk.”

“I used to go shopping with my mom, and now I’m going alone,” she continued. “I grew up and I think it is even better that way. Being more grown up also helps me in skating. Obviously it is nice to know that I am loved and supported, but on the ice you are by yourself and this is how you can develop more character.”

The skater lives and trains most of the time in Novogorsk outside Moscow in the brand new training center. The athletes live in hotel rooms, there are three ice rinks, a dining room, sauna, gym, and everything else you need for high-level sports. When Leonova gets a few days off, she likes to return home to St. Petersburg to spend time with her family.

“When I am there for more than three days, I’m training there. I am always happy to meet my family and other close people. It worked out well in the past season and I didn’t even have time to miss them,” she laughed.

In Novogorsk, life is focused on training. There is not much to do or to see. In her spare time Leonova likes to visit a nearby shopping mall.

“I rarely go to Moscow because I don’t like Moscow so much,” she revealed. “Most of the time I use my spare time to rest and I don’t go anywhere. When I did go after Worlds, I fell sick right away. I had a fever and a sore throat. My body is telling me that I need to rest.”

There was time to rest after the World Team Trophy and one show in Italy on April 29. On May 5,  Leonova went to Cyprus for a vacation together with her sister and her brother. However, now the new season is knocking at the doors. On May 15, Leonova will leave with Morozov and his other skaters to New Jersey in the USA for three months to build up new programs and to train. Her plans include changing both programs for the new season.

“I’m always doing that because I like to surprise,” said Leonova. “The short program should be something cheerful and entertaining so that people will remember it. The long program, on the other hand, should have character. It is important to tell a story and to draw the spectators into the program.”

However, there is one type of music that Leonova has longed to skater to for a long time.

“I dream of skating to a Tango, but I’m afraid that it won’t happen,” she shared. “My coach doesn’t like the idea, probably because so many people skated to this kind of music. I wouldn’t want to use a very well-known piece and it is not so easy to find something new.”

“It would be too much if I was to skate my next program to “Tango de Roxanne,” the Grand Prix Final bronze medalist explained, laughing.

Of all the places she has traveled to, Nice is her favorite.

“I love Nice and I was there a lot of times,” said Leonova. “I enjoy walking at the seaside promenade.”

She also enjoyed visiting Disneyland in Tokyo three years ago and likes being in New York.

The 2010 Olympian is now looking forward to next season.

“I want to do well in the Grand Prix. Obviously I want to qualify for the Final and place higher than last time. I finally want to win Russian Nationals if I’m going to compete there,” she giggled.

Last December, coach Morozov wanted her to have some rest instead of competing at nationals, but she insisted on going.

“It is funny that I had  a lot of success elsewhere, but not yet at Nationals,” said Leonova.

Perhaps it should be a small consolation that Alexei Yagudin, the 2002 Olympic Champion, a four-time World Champion, and three-time European Champion never won Russian Nationals.