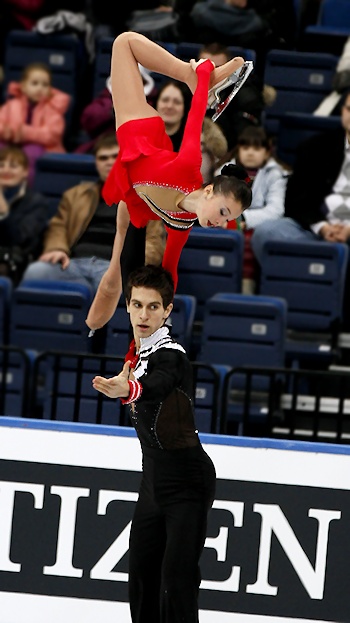 Russia's Vasilisa Davankova and Andrei Deputat perform to "Flamenco" by by Didulia at the 2012 World Junior Championships.

“Vasilisa the Beautiful” is a well-known Russian fairy tale, and the story of Russia’s Vasilisa Davankova and Andrei Deputat reads almost like a fairy tale, as well.

In May 2011, Davankova and Deputat, who had moved from Kiev to Moscow a year earlier, teamed up. Just a mere few months later they successfully competed in national Russian events, surprising not only officials and competitors, but even their coach Sergei Dobroskokov.

The young team went on to place fifth at Russian (senior) Nationals before striking gold at Russian Junior Nationals, and then claimed bronze in their first-ever international competition, the 2012 ISU World Junior Figure Skating Championships in March.

Davankova and Deputat were training in the same group with their previous partners and knew each other before teaming up together.

“It was nice when we were teamed up,” recalled Ukrainian-born Deputat. “We suited each other well in terms of body types and maybe even character. Everything came easy to us. We gelled quickly as a team. After one month we were already almost a pair that feels each other on the ice.”

“The first impressions were good, because I liked Andrei as a partner and I thought about skating with him,” Davankova added.

The throws were the elements that were the easiest for them to learn.

“She likes the throw and I like the twist,” Deputat, 19, pointed out.

Their quick success came as a surprise for Coach Dobroskokov.

“When I was writing down our plans, I wrote about placements from fifth to seventh,” said Dobroskokov. “I thought, well, they are a new team. But then they were first and second, second and first in all their (national) events.”

“Usually I am spot on when I make the plans,” he continued. “It was a crazy performance over and above target. However, they did work like crazy this first year. They are two workaholics. They worked, worked, worked, in the gym, on the ice, everywhere.”

Dobroskokov went on to explain that their success resulted mostly from their ability to work hard.

The season passed like a whirlwind for the young team, however, Davankova (who turned 14 on May 2), and Deputat never missed a beat and are preparing for the next season.

“After Junior Worlds, they rested a little, because the upcoming season will be even harder, more loaded than the past one,” noted Dobroskokov. “We did two new programs right away, using different choreographers.”

Nikolai Morozov did the short program, while Irina Zhuk created the long program. The skaters, however, aren’t ready to reveal their music choices.

“It’s still secret,” Deputat said with a grin. “The short program will be as fast-paced as the one we had before, and the long program will be more powerful and more grown-up”.

“We were criticized for doing too many cross-overs and lacking transitions (last year), but they had to learn the elements,” added the coach. “Now they have a lot of transitions and the program is very interesting.”

The team has also been working on new elements.

“In the short program, we’ll need the throw Salchow, and we didn’t do it before,” Davankova announced. “Plus we want to do a (side by side) triple Salchow in the free skating.”

The team had a triple toe and double Axel last year. They are also contemplating working on a quadruple twist over the summer if Davankova doesn’t grow too much. Her partner confirmed that she has already grown “a little bit”.

At the end of May, the skaters enjoyed a two-week break from ice training and used it to focus on their studies. Davankova is a pupil, while Deputat is a student at the Sports Institute.

“I go to school in between two practice session, but I am studying externally like most athletes,” shared Davankova.

In their spare time, the skaters enjoy hanging out with their friends and watching movies.

“Mostly these are friends from the ice rink,” said Deputat. “We don’t have much time to go somewhere else. We are friends with each other and are a closely knit group. We try to stay together and we help each other.”

Davankova and Deputat get along well, which is visible in their interaction on and off the ice.

“Usually we don’t have quarrels, but we may have arguments about how to do something and what to include in the program,” noted Deputat, “but basically we solve everything peacefully.”

“These are more playful arguments,” Davankova clarified. “In general, we are laughing afterwards. There hasn’t been anything serious yet. Obviously, we can quarrel when something doesn’t work and the coach is ticked off, then I might loose my temper. Andrei tries not to upset me.”

“I try not to add fuel to the fire,” Deputat agreed. “She is a girl, still young, and if I’m putting too much pressure on her this could affect her development, her character. Emotionally, she would become shy and not say what she is thinking. You have to listen to what your partner says. This is also very important. As a pair, it is better to be together.”

The team doesn’t feel that either one is the leader in the team.

“We try to share all responsibilities,” said Davankova. “The two of us solve any problems or questions that come up.”

Davankova says that her mother used to describe her character as difficult, but she doesn’t agree.

“I want to believe that I have a good character,” she said

“My first partner had a very difficult character,” he acknowledged. “Compared to her, Vasilisa is a real treasure, honestly. She has a very good character, not only as an athlete but as a friend. As for myself, I am good-natured, maybe even too much so, but my parents brought me up in that way that I am open-minded for everything. I’m trying to help everyone who needs my help.”

Davankova nodded in agreement, adding: “He is really very good-natured and this is helping our team.”

When asked to choose three adjectives to describe her partner, Davankova responded with “good natured, honest and reliable” while Deputat chose “emotional, cheerful and hard working” for her.

Davankova followed her younger brother Nikita, born in 2001, into figure skating when their mother sent him to skating in order to treat his asthma.

“I was seven years old which is rather late for figure skating, but I still started out,” the teenager recalled. My (singles) coach Elena Alexandrova then supported my switch to pairs and I ended up in Sergei Dobroskokov’s group.”

She was paired with Semion Kazantsev for one year. Her brother now plays ice hockey in a CSKA youth team. Deputat was put into skating at the tender age of two years and eight months by his mother who skated recreationally in her youth.

“I was very young,” said Deputat. “I was still not walking very well, but I was already on the ice in skates. When I was six years old, I competed in my first local event and I came first. That pushed me to continue my sports career and so I’m still skating now.”

Deputat was 15 when he switched to pairs and skated for two years with Vladislava Rybka. They competed at summer events in the USA in 2009 as they took part in training camps in the USA at the time. Soon afterwards, the team split up as Rybka’s family wanted to move to the USA and Deputat didn’t want to follow.

In early 2010, Deputat and his father went to Moscow to Dobroskokov on the recommendation of his coach in Kiev, Galina Kukhar. Dobroskokov took him on as a student and he teamed up briefly with Polina Safronova. Deputat now lives alone in an apartment in Moscow while his parents are back in Kiev.

In skating, both look up to four-time World Champions Aljona Savchenko and Robin Szolkowy of Germany.

“They are my idols in everything,” Davankova revealed. “I adore Aljona, and from their elements I especially admire their throw flip.”

“I have idols in elements and in other aspects such as skating skills and how they are bringing across emotions,” Deputat explained. “Concerning the elements, I look up to Tatiana Volosozhar and Maxim Trankov. I’ve known Tatiana since she skated with Stanislav Morozov and I talked with them. He even taught me some pair elements. Concerning skating skills, obviously I look up to Savchenko and Szolkowy. These are skaters that I think everybody adores. I admire the way they bring emotions across. They are a unique couple.”

The young World Junior bronze medalists are of course dreaming of achieving the same success their idols have enjoyed.

“The most important thing, however, is not to reach the highest level in medals, but to skate in a way that yourself, the audience and everyone who is supporting you likes,” Deputat stressed. “The medals will come when you skate well. The goal is to perform in a worthy way.”

Their consistency in competition has set them apart this past season. Davankova credits their coaches for this. In addition to Dobroskokov, they have also been working with Sergei Rosliakov and choreographer Dmitri Stepanchikov.

“Our coaches taught us a good technique and we are trying to keep it up in each practice and not make too many errors,” Davankova analyzed. “We are trying to be more or less confident before each competition. Maybe that explains [the consistency].”

In June, the Russian Junior Champions and their group are headed to Sochi for 18 days of off-ice training. Then they would want to resume on-ice training in an ice rink in the city of Konakovo, 150 kilometers north of Moscow. The first internal test skate for the Russian Junior pair is scheduled from August 6 to 11 in Novogorsk.

Davankova and Deputat will debut on the Junior Grand Prix circuit this fall and they plan to attend the events in Lake Placid, New York and Zagreb, Croatia. They also would like to compete at the senior level at the Nizza Cup (Coupe Internationale de Nice) and at Russian Nationals again. Thanks to their fifth place at senior Nationals, the team has been included in the “preparation team for Sochi 2014,,” which means more funding.

Their goals for the upcoming season include moving up from third place at Junior Worlds.

“We want to beat at least one Chinese team,” Dobroskokov said, laughing.

At senior Nationals, they are aiming for fourth or fifth place. Thinking ahead, the coach boldly said that his dream is that they make the Olympic team for Sochi.

“This is my dream,” said Dobroskokov. “If it will happen or not, we will work for it. We are setting for ourselves the maximum goal.”

“The material is there and if we continue to work this way with each year, we’ll gain more experience and skills,” Davankova agreed. “Now we can at least strive for getting there.”