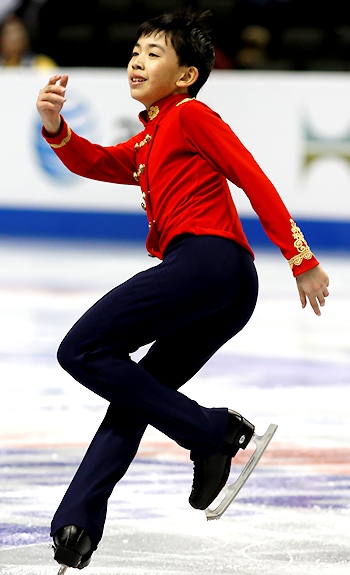 Vincent Zhou performs to the “Nut Rocker” by the Trans-Siberian Orchestra at the 2012 U.S. Figure Skating Championships.

Mere hours after her record-breaking win, another local captured the 2012 U.S. novice men’s title. Vincent Zhou, an 11-year-old from Palo Alto—home to Hewlett-Packard, took his turn in the spotlight as he accepted his gold medal in front of friends and family.

“I don’t really look back at winning the title, because no matter whether I win or lose, I like to put my competitions behind me,” Zhou said. “Of course it was great to win and to skate in my hometown, but I keep my focus on what I am doing now.”

Like Chen did before him, Zhou set a new scoring record in San Jose, and outdistanced his nearest competition by more than 25 points.

“It was really exciting for me to break the record,” he admitted. “In the beginning of the season, I sort of felt like scoring that high would be impossible. But when I first broke 160 points at Sectionals, I was starting to feel a little more confident.”

Zhou tried to take in as much as he could from the experience of skating in his hometown, even though he felt guilty of feeling a bit of pressure to perform.

“It was really exciting, but it also put some extra pressure on me because I knew that I had a hometown crowd rooting for me,” he admitted. “I didn’t want to disappoint them. It was really weird that such a big competition was held in my hometown, but I wanted to take a chance and just enjoy the support.”

“I’m really grateful for Tammy, and I think that we are a wonderful team,” Zhou shared. “She has standards, but she lets me enjoy my skating. I never could have come this far without her. She sets expectations for me, and you can tell that she really cares about you. She’s kind of like my skating mom.”

Since winning in San Jose, Zhou is undecided as to whether he will test up to the junior level domestically, though he is still too young to compete internationally.

“I haven’t taken the test yet since it is undecided if I’ll move up to junior,” he explained. “I think of being junior as being really mature. What I have to do now is polish my skating because the difference between novice and junior is pretty big. I’ll be working on that this summer and then decide what level I am going to skate at.”

Zhou has also been working on bolstering his technical score by adding in some new tricks to his programs as well.

“I am basically working on triple-triples, but they all need sort of an extra coat of paint,” he shared. “I don’t do the Axel yet, but I can do the other jumps with a triple toe at the end.”

Zhou trains for three hours five days a week, and also does off-ice training on some days.

“I normally take Saturdays off to relax, and skate only two hours on Sunday,” he said.

This season, Zhou will skate to music from The Sorcerer’s Apprentice for the short program, and to music from Casablanca for the free skate.

“Cindy Stuart choreographed the short,” Zhou announced. “I watched the movie, and it’s a genre of music that I like to skate to. It’s a powerful, yet entertaining program. My new free skate is choreographed by Justin Dillon, and I have to be a debonair gentleman. The program has a deeper meaning, and is morally explicated.”

Zhou is getting an early start to the season, making his competitive debut this weekend in Paramount, Calif.

“My first competition is this weekend is the SoCal Inter-Club,” he said. “I will compete later in the LA Open. I will do other competitions, too, but they are still to be determined.”

When he isn’t being a champion figure skater, Zhou devotes much of his free time to keeping up with his studies.

“I go to a cyber school called Connections Academy,” he said. “Next semester I will be in eighth grade, and I will be taking Algebra II math. I skipped three grades in math and one grade in everything else.”

Sometimes Zhou’s heavy academic load presents a challenge for the skater, but he has a solution for that.

“My mom is always there to help me,” he said proudly. “I’m in the gifted program and take honors classes, and sometimes I have trouble with my lessons. She helps me get though the tough lessons.”

Zhou and his mother live in southern California, but his father and older sister Vivian still live in Palo Alto some 400 miles away.

“I miss my sister and my dad,” he admitted. “Every time we go back to Palo Alto, it’s like a reunion.”

Vivian is a competitive diver who finished in 2nd place in the 2011 Junior National Championships in her age group.

“She’s in Beijing for the summer because she got the opportunity to train with Olympic diving coaches,” Zhou said.

Zhou also makes time for some kid activities in his busy schedule.

“I like to play with my new cat, and also I love solving puzzles,” Zhou shared. “I have three large stacks of puzzle books on my bookshelf that I like to do, and I also love reading books on my Kindle. I often go out on my bike in the evening for about 20 minutes.”

Zhou includes world champion Patrick Chan, Brian Boitano, and Michael Weiss on his list of skaters he admires—each one for a different reason.

“I look up to (Chan) for his sunny personality,” he stated. “I also like (Boitano) who shared a hometown with me, and Michael Weiss for his generosity for creating the Michael Weiss Foundation to help other skaters.”

He also has taken a liking to 2012 Worlds bronze medalist Yuzuru Hanyu.

“I love watching his dramatic (free) program (from last season)—he put a lot of athleticism and emotion into it,” he said. He is 17 right now, and he’s already a world medalist.”

In the short term, Zhou hopes to qualify for the 2013 U.S. Championships in Omaha, but has much bigger aspirations for his career in the long term.

“I want to go to the Olympics four times— in 2018, 2022, 2026, and 2030 before retiring,” he said matter-of-factly. “It’s a fat chance, but I really want the glory of winning the most competitive award and to stand on top of the Olympic podium with the gold medal.”

Outside of the rink, Zhou also has an impressive history of volunteerism, and is aware of the importance of giving back. Not only has he participated in a number of benefit skating shows, but he has also worked with the Palo Alto Green Team, helped to raise money for the Palo Alto Unified School District, and organized a Teddy Bear Drive to donate toys to children in need with the 2012 U.S. Junior Men’s bronze medalist, Philip Warren.

It was in large part to his volunteerism that Zhou won the 2012 Athlete Alumni Ambassador (3A) Award.

“It’s an award that doesn’t come because of skating well—it comes because of having great morals,” he explained. “A big topic on the application is volunteering, and it shows how much you care about others. My parents encourage me to be generous and to try hard to volunteer.”

But his number one goal is enough to make any parent proud.

“I want to be a complete skater, but I also want to be known for having a great personality and a sunny attitude.”