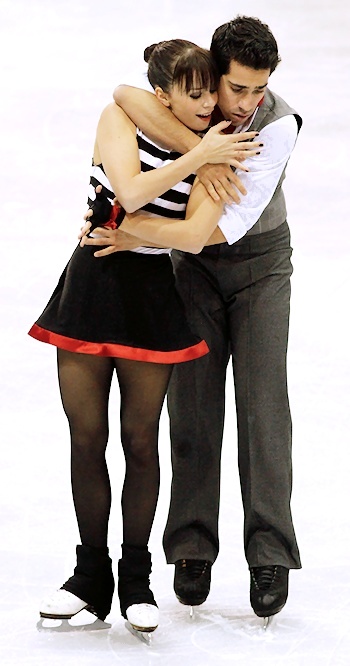 Anna Cappellini and Luca Lanotte of Italy missed the podium at the 2012 European Figure Skating Championships by the slimmest of margins – just 0.03 points. However, the fourth place at Europeans and their sixth place finish at the 2012 World Figure Skating Championships were their best results to date, and made the Italian team just hungry for more.

Currently, Cappellini and Lanotte are in Novi, Mich. working with Igor Shpilband for the new season. They are also joined by their main coach Paola Mezzadri.

The much-discussed end of the professional relationship of Shpilband and Marina Zueva also affected the Italians, who originally had planned to train with both coaches and next to some of the world’s best ice dance teams during the summer.

“We were completely gobsmacked to hear about Igor and Marina’s split,” said Cappellini. “We had been looking forward for a long time to work with such a strong team of coaches and they were both so amazing in their own ways.”

“Our decision to come and train in Novi with Igor is mostly based on the fact that we already have choreographer Paola Mezzadri in Italy to guide us with new ideas and the construction of our programs,” she continued. “What we mostly needed was someone to help us improve our elements and our skating technique and training methods, so we thought Igor was just the perfect man for the job.”

“Obviously we would have loved to train in Canton with both coaches and the amazing group of skaters they created,” summed up Cappellini, “but after two weeks in Novi with Igor we couldn’t be any happier with the work he’s doing with us. It’s simply a pleasure to work with such a competent, committed, genuinely nice man.”

Beforehand, Cappellini and Lanotte had spoken to Zueva and Shpilband about coming to Canton.

“We were very excited to join such a successful school with such hard working students. Our agreement was to work with both coaches, therefore we feel these allegations have nothing to do with us,” Cappellini explained, referring to rumors that they were a reason for the conflict between the coaches.

The Italian Champions are working hard on their new programs and picked two very different themes. For the short dance, they chose music from the movie Seven Brides for Seven Brothers.

“We fell in love with this music the first time we heard it and we went to watch the movie right away!” Cappellini pointed out happily. “It’s such a lively music and a great style solution. We were looking for something not classical and with a story, so this musical really suits our needs.”

There new free dance is inspired by Carmen.

“We always felt this story and the characters suited us, our passion, and ability to portray stories and emotions,” Cappellini shared. “We were only waiting for the right time and we feel like after last season we’re ready to take on the challenge of portraying this theme differently than it’s ever been done before.”

The 2010 Olympians believe that Carmen, although it has been used many times, is still very popular with the audience.

“Some music simply always delivers a strong emotion and is always a pleasure to hear. This happened last year as the crowd was enthralled by Carmen in Verona’s historic arena,” the dancer explained, referring to the “Opera on Ice” show they participated in last September.

The team hopes that their programs will propel them to new heights in the upcoming season.

“We’re obviously looking to improve all our results, starting from the Grand Prixs but also at Europeans and Worlds, as well,” stated Cappellini. “In the summer this means you go back to your basics to look for any improvement possible. Never becoming lazy or content with what you do, but always trying to push yourself out of your comfort zone.”

However, looking back, they were satisfied with what they did this past season.

“I think it was the best season that we have ever done,” Lanotte commented, “but there was something missing and we are pretty disappointed about that, but it is the rules of the game.”

The “missing” piece is that bronze medal from the European Championships that they came so close to.

“For the first time, we skated under the pressure of wanting that medal,” said Cappellini. “I think we put a lot of pressure on ourselves and we were just trying to collect points, which isn’t a bad concept in itself. We really separated ourselves from the performance.”

“We were skating, thinking ‘this was level four choctaw, I’m not sure,'” Cappellini added about their short dance at Europeans, where they made a costly mistake on the twizzles at the end. “We didn’t live the program.”

It was a learning experience for the ice dancers. One of their goals was to ensure that the judges knew that they were there and belonged in the top group.

“We were not like 100 points away from a medal,” Lanotte pointed out, referring to Europeans.

“Even better was the way we used to compete before and the way we compete now,” continued Lanotte. “Now, we are more complete, more independent, and more alone. It doesn’t mean that the coach or choreographer are not important, but what’s going to happen on the ice is Anna and I.”

The Italians had been working on developing this kind of mindset before, however, only their experience at Europeans helped them to fully embrace it.

“Sometimes when you want to become a champion, you can’t be nice to anyone and you cannot let everyone enter your zone,” Cappellini explained. “Maybe they want to help and that can make you feel obligated to be polite and talk to them, but it is just really our moment.We know exactly what we have to do, so we have to focus on ourselves.”

“Even just listening to people before going on to the ice can be a little detrimental,” Cappellini elaborated. “I think it is the biggest lesson that we could learn. Now, hopefully, we’ll be fighting for more medals and for higher placements. It is important to handle everyone around you tactfully, because they want to help, but it can definitely interfere with your concentration.”

Cappellini and Lanotte now seem to have found the team they need in order to succeed. In 2009, they left Italy to work with Muriel Zazoui and Romain Haguenauer in Lyon, France. While the first year went really well, the next, post-Olympic season, was a setback. The team didn’t feel comfortable with their free dance, didn’t perform too well, and finally missed the 2011 European Championships due to Lanotte suffering from injury.

Subsequently they returned to Italy and are coached by Paola Mezzadri and Valter Rizzo in Milan, however, they are the only top-level ice dance couple in their group and sometimes feel lonely. Hence, their decision to go to the USA for summer training.

For the upcoming season, the Italians have been assigned to the Grand Prix events in Canada and France.

“We’re really pleased with them,” Cappellini shared. “We always found amazing crowds both in Canada and Paris, so we know that as long as we put our hearts in our skating, we’ll be able to create great moments on the ice, for us, and the people who will be watching.”

In addition, they are considering doing one or two smaller competitions before the Grand Prix season starts, however, haven’t decided which ones yet.

“Luca and I are just so busy training and taking in the life here in Detroit,” Cappellini noted. “Weeks are literally flying by and before we know it, our names will be called by the announcer on the ice once again.”

“I think that we’ve really grown up together,” Cappellini said of their relationship. “We’ve really changed and evolved a lot when I think of day one when we got on the ice. I think of Luca like family. We’ve been through so much together that he’s like a cousin. We can fight and we can go through rough patches, but deep down there is like love in the sense of – if you ever need me, I’ll be there night and day.”

Off the ice, they don’t spend much time together, but they get along very well.

“Our relationships has gotten way more direct,” reflected Cappellini. “There is no more joking around or trying to get attention. If I think something was bad, I’ll say it and no one is offended. It’s going both ways. If Luca says I’m wrong, I’ll stop, think about it and say, ‘Ok, let’s do it again.’ We can totally be ourselves with each other.”

Her partner agreed. “We are still careful that we are not too harsh with each other. The important thing is what you have done at the end of the day. This is important. It’s not how you talk, good or bad.”

As a dance team, the Italians see their strength in interpretation.

“There is one thing I learned – I can’t do a program that I don’t like,” Cappellini said. “I know there are people that can or they try and learn to love it, but if I don’t love it, I won’t love it and it’s not going to work.We definitely have to have programs that really do something for us emotionally.”

“Our link with the performances and the ice is the feeling,” Lanotte elaborated. “If we feel something during the program, if we feel the program, we can bring it to the public. If not, we’re just try to act, pretending on the ice. It’s everything about the feeling for us.”

Outside the ice rink, Cappellini can sometimes be found in an animal shelter walking dogs.

“It’s like a little hobby for myself that I’ve done during the weekend,” she revealed. “It’s nice for me to go and see something that is totally unrelated to skating. I think it’s refreshing and selfless when you are not always at the center of attention or in the spotlight, and instead go out to a little place just to see that there are animals there that need you, that need a little love.”

Lanotte enjoys cooking and hanging out with his friends in his spare time. Both ice dancers have not yet decided what they want to do after their competitive career is over, however, Cappellini’s dream is to study physiotherapy.

Unsurprisingly, their focus are the upcoming 2014 Olympic Games in Sochi. After this, they plan to sit down and think about their future.

“I think it’s fairly sure that we won’t stop at Sochi,” Cappellini shared. “Of course it depends on results, it depends on health, and if we feel that we can push it if our bodies are good. We don’t expect to finish with Sochi, but it will be the first time that we’ll talk about it.”

“We’ll also evaluate our status the first year after Sochi,” Lanotte added. “After Sochi you can say things, you can decide, but actually you’re going to see after the first year. This is because if you are in the top three at Europeans, you can say, ‘okay, we still have three years and it could be a good three years.’ Maybe we can keep going.”