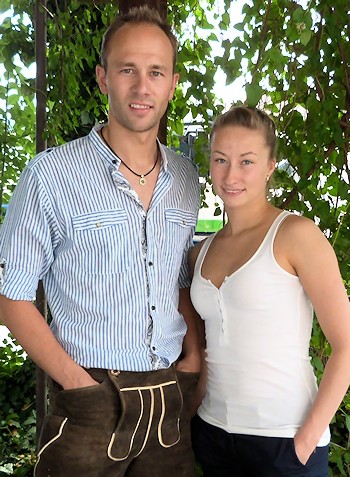 Instead of taking a well-deserved vacation after the 2012 World Figure Skating Championships, the team from Oberstdorf went more or less straight to Moscow to mount a new free program.

“We did that directly because we told ourselves we should do it as long as we are still in shape and before taking a break,” joked Gazsi.

The decision was made easier as Gazsi had to attend a course with the German army that lasted six weeks starting in mid April.

Zhiganshina and Gazsi trained in Moscow from 2005 to 2009, as well as frequent trips back to work with choreographers and circus artists. This season, however, they picked Ilia Averbukh as their new choreographer.

The 2002 Olympic silver medalist and Ice Dance World Champion choreographed a competitive program for the first time for a high-level ice dance team. For the skaters, it was a great experience.

“Actually it was my idea,” Russian-born Zhiganshina shared. “We’ve worked for a long time with Maxim Staviski as a choreographer, but even the most talented choreographer has his typical style. After five years, we were looking for a change. We’ve seen what he (Averbukh) does in his shows and what kind of ideas he has.”

“It was great,” agreed Gazsi. “You notice that he did like three million programs in the past few years. They had four seasons of their (TV) show and each week they had to do eight programs and they were not allowed to repeat any music from one of the previous shows.”

“Averbukh had his music guy with him and the man is amazing,” the 27-year-old continued. “He was looking for music the whole day long. Later we met, he cut the music in a cafe, and Averbukh was dancing around us and presenting us his ideas. That was really a lot of fun.”

The dancers and Averbukh then went to train at an ice rink in the night from 1 to 3 in the morning to work on the new program.

“It is a problem to find ice in Moscow without someone watching,” Gazsi said, grinning.

Once they began, everything happened really fast. Now the dancers are ready to reveal some information about their new program.

“The first part is a Rhumba, Tore my Heart, then the piece in the middle is something that nobody knows, and the third part is Ramalama Bang Bang,” Gazsi revealed. “The music is cool and the story is fun, not a drama. The story is “Two from the Grave,” not exactly about zombies, but going into that direction. It will be comical.”

The dancers went back to Moscow at the end of May for two weeks to select music for their short dance with Averbukh and the music technician. Finding something suitable for the Polka was a challenge, and they discussed their options.

Zhiganshina didn’t want to do a Bavarian Polka again like they did before and both disliked the idea of the “classical” Polka with an officer in uniform and his beloved lady on the opera ball. They had discovered a beautiful French Waltz, but even Averbukh’s magic musician didn’t find a suitable Polka.

“I must say that I don’t like the Polka so much in general,” Zhiganshina admitted. “I’d have preferred Blues, Paso Doble or Tango, but we have a Polka that is different and I even like it.”

They finally chose an unknown piece – they don’t know the name – and a Waltz from the Russian movie The Admiral.

While many skaters were not thrilled about the Polka theme, the German Champions feel it is actually challenging.

“You should not underestimate the Polka,” Gazsi pointed out. “First of all, it is really fast and secondly, there are not so many nice Polka music pieces. A lot of it will be repeated or similar, and therefore it is hard to find something different.”

He feels that the Polka is technically challenging, which he sees as an advantage for them.

Gazsi thinks that technique is their strength and wants to improve their dynamics on the ice. He describes the character of their team as “versatile”.

“I hope that we have several characters and that we are able to portray them,” he elaborated. “It is, and always has been, our goal to show different characters in different programs. I believe so far we were able to do that.”

With a smile, the sport soldier added that they rely on the coaches to push them in training.

“Overall the coaches can be happy with us,” he said. “You could say that so far we have taken the next step each time and haven’t been treading water. We still have to do a lot and we can take further steps. For this, we still have some time until the Olympic Games and maybe after the Olympic Games.”

Since early June, Zhiganshina and Gazsi have been in Oberstdorf working with coaches Martin Skotnicky and Rostislav Sinicyn. They are taking part in the two IceDome summer camps in Oberstdorf and plan to open their competitive season with the Nebelhorn Trophy on home ice. They are also slated for two upcoming Grand Prix events – Skate America and Cup of Russia.

The team is unsure whether they will be doing any other competitions in between.

“It depends on how it goes and what changes we have to make,” Gazsi said.

The event in Moscow will be especially interesting as Zhiganshina and Gazsi will compete against her younger brother, World Junior Champion Ruslan Zhiganshin, and his partner Victoria Sinitsina for the first time.

“I can’t really explain what my feelings are,” the 25-year-old dancer said. “It is very, very strange to compete against my own brother, the little brother on top of that. I know that for Ruslan it is much more interesting to compete against me than the other way round. Obviously, to beat the big sister would be great for him.”

“I’m still happy that we’ll be in the same competition,” she added. “Our goal is clear – we want to beat them, even on their home turf,” Gazsi assured, laughing.

The main goal for the upcoming season is to improve.

“We want to up the ante,” Gazsi noted. “We want to defend our National title. Looking at the Grand Prix, I don’t think we can make the podium as the competition at all events will be very tough. So if it is no podium, we are aiming for the first place after the podium. I think we can do that.”

He also hopes to improve from their 8th-place-finish at Europeans and to get into the top ten at Worlds.

“We were a little disappointed at Europeans,” he admitted.

The couple was ranked seventh in 2011, which marked their breakthrough. At Worlds, they came very close again to making the top ten.

“The opportunity was there,” said Gazsi. “It would have happened if not for my stupid twizzle (he made an error in the short dance). Hopefully we’ll get another chance.”

A good placement at Worlds will be important towards the qualification for the Olympic Games. Zhiganshina doesn’t have German citizenship yet, but the dancers are positive that she will receive it in time. The skater has passed several tests successfully and has officially applied for citizenship. Her documents are currently under review by the German authorities.

In addition to training, Zhiganshina is helping to prepare the summer ice shows in Oberstdorf, “Musicals on Ice”.

“This is interesting,” she shared. “It is hard to do after our practices, but it is a different aspect.”

Despite her participation in the work for “Musicals On Ice,” Zhiganshina doesn’t see herself as a coach or choreographer in the future.

“I’d prefer to have a job outside of figure skating with just some skating on the side,” the ice dancer explained. “I’d like to work in the fitness business. I’m afraid to lose my flexibility if I stop training. I always want to be athletic and stay in shape.”

Her partner does not plan to coach in the future, either.

“In between finishing and starting to do something else, I have to take another step,” Gazsi said. “There are a few things I am interested in and many others I definitely don’t want to do, and one of them is coaching. It is an ungrateful job. You have to work very hard. I think I’d be a coach who wants to give everything and that’s even worse than an being athlete.”