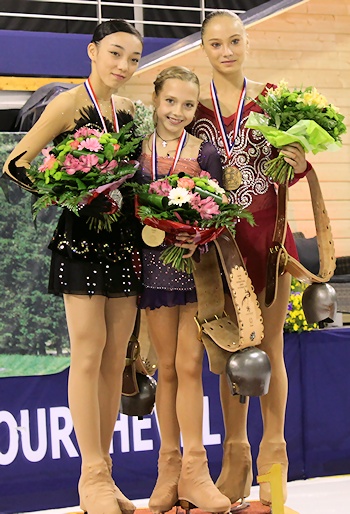 The 2012-13 ISU Junior Grand Prix of Figure Skating kicked off this week in Courchevel, France, with approximately 76 skaters/teams representing 28 countries competing in the Men, Ladies and Ice Dance disciplines.

Elena Radionova of Russia won the event by landslide, while teammate Uliana Titushkina took the bronze. Rika Hongo of Japan rose from third place after the short program to capture the silver.

Radionova was the clear winner of the event after placing first in both the short and long program with a total score of 177.79 points. Both programs were rock solid with positive Grades of Execution (GOE) in all elements.

In her short program (61.15) to music from The Fifth Element soundtrack, Radionova landed a triple Lutz-triple toe, a triple flip, and a double Axel. All three spins were graded a level four and received many +2 positive GOEs, as did her level three straight line steps.

In the long, the reigning Russian junior bronze medalist landed a total of seven triple jumps, including a solid triple Lutz-triple toe. The 13-year-old displayed strong level three foot work, and wowed the judges with a layback spin which garnered a level four and a hoard of positive GOEs. She finished in first place (116.64) and overall with a total score of 177.79.

In her  long program to Swan Lake (96.22), the student from Nagoya received an edge call on her opening triple Lutz and later fell on a triple loop, but otherwise landed four clean triples including a double Axel-triple toe. With 149.38 points in total, she was able to move up to second place overall.

Titushkina had a good start placing second in her short (53.62) program to music from Teheran 43 which featured a triple Lutz-triple toe, triple flip, and double Axel. She also displayed a good level four layback spin, but lost a bit of speed on the flying camel.

The 13-year-old had a sub par performance in her long, underrotating several triple jumps, falling on a loop, and a receiving a time violation deduction. The teen from St. Petersburg placed fourth in the long (90.30) and third overall (143.92).

Boyang Jin of China placed first in both the short and long program for a lock on the gold with nearly 10 points to spare. USA’s Jason Brown came from third place after the short to capture the silver, while Japan’s Ryuju Hino slipped from second to third to settle for the bronze.

In his long routine (131.15) to Charlie Chaplin, the 14-year-old impressed with a quadruple toe and triple Axel-double toe, and his only errors were an underrotated double toe (in combination with a triple Lutz-triple toe) and a step-out on a triple Lutz.

Brown opened his short program with a solid double Axel for his opening jump, however, the current JGP Final champion received an edge call on a triple Lutz (in combination with a triple toe) and two-footed the landing of his triple flip. Despite the errors, he presented a very good footwork sequence which earned a level four and mostly +2s for GOEs. He placed third with 59.33 points.

In his long to Liebestraum, the reigning World Junior bronze medalist underrotated several jumps and received an edge call on both triple Lutzes. Once again, however, he displayed good footwork and spins, and placed second with 126.48 points. With a total score of 185.81 points, the 17-year-old was able to move up to second overall to win the silver.

Hino stepped out of his opening triple Axel in his short program to music by Kodo, and also received an edge call on a triple flip, but otherwise landed a triple Lutz-triple toe and displayed good spins and footwork to place second (59.70).

The Japanese junior champion was off to good start in his long to Robin Hood in which he opened with a solid triple Axel-toe, but he later fell on a triple Lutz and received an edge call on a triple flip again. The 17-year-old placed third in the long (121.91) and overall with 181.61 points.

USA’s Harrison Choate placed fourth overall (169.70), followed by Alexander Petrov of Russia (159.68) who placed sixth in both the long and short program. 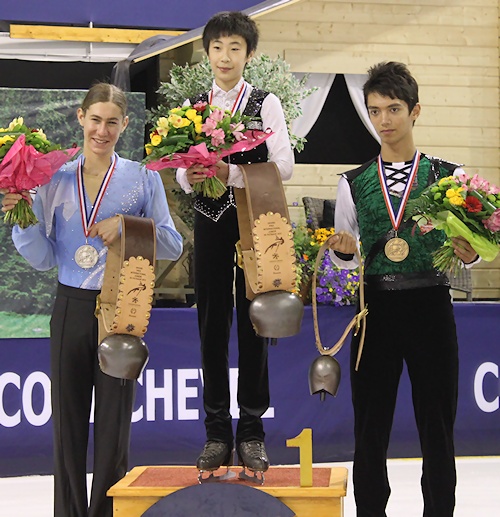 Gabriella Papadakis and Guillaume Cizeron of France overcame a second place finish in the short dance to win the gold, while Russia’s Valeria Zenkova and Valerie Sinitsin slipped from first to second overall for the silver. Madeline Edwards and Zhao Kai Pang of Canada placed third overall for the bronze.

Papadakis and Cizeron put out a good Blues/Swing dance which was highlighted by level three twizzles, a level four straight line lift, and a solid level two midline step sequence. The team also earned a level three on sequence two of their blues pattern, and placed second with 52.25 points.

In their free dance to a Pink Floyd medley, the French team showed strong level four lifts and a dance spin, as well as a very good level three diagonal step sequence. They placed first in the free dance (78.88), and with a total score of 131.13, won the gold.

Zenkova and Sinitsin were nearly solid in their Blues/Swing routine which featured the only level four in the Blues Pattern section of all the dance teams. The team also put out a good level one midline step sequence and level four rotational lift which earned positive GOEs from the judges.

The Russian junior bronze medalists did well in their free dance to music from the Cats musical. The routine was highlighted by a level four curve lift and level three circular steps and twizzles. They earned 72.03 points for second place, but with a total score of 124.94, slipped to second overall.

Edwards and Pang produced a level four straight line lift and twizzle sequence, as well as a level three on sequence one of their blues pattern in their Blues/Swing short dance, and placed third with 46.53 points. 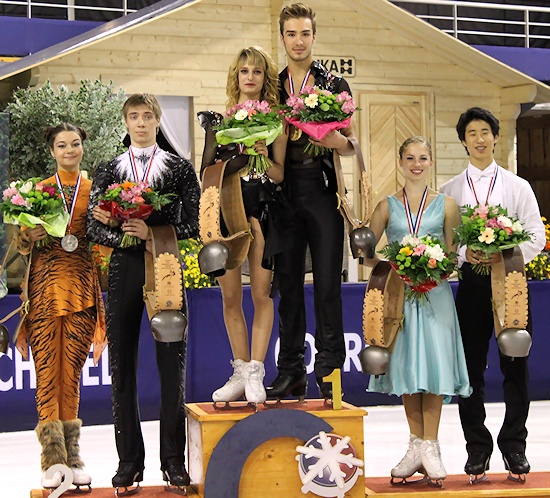