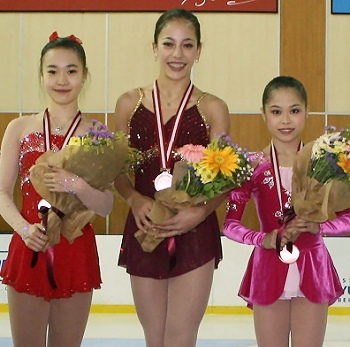 USA’s Leah Keiser came from third place after the short to win the gold in her JGP debut in Istanbul. So Youn Park of South Korea slipped to second, while Japan’s Satoko Miyahara rebounded from sixth to third place overall to win the bronze.

In her mature and powerful short program Ravel’s Pantoum for Piano, Park landed a solid triple Salchow-double toe and double Axel, both of which were awarded positive Grades of Execution (GOE) from all nine judges. The 2012 Asian Trophy champion also produced a triple flip and displayed strong spins and footwork in her routine to, placing first with 51.45 (30.02/21.43) points.

Russia’s Uliana Titushkina landed a solid double Axel in her short to music from the Teheran 43 soundtrack, but received an edge call on her opening triple Lutz (in combination with a triple toe) and underrotated her triple flip. The 13-year-old student from St. Petersburg also struggled a bit with a Flying Camel spin, but otherwise showed footwork, nearly tying Park with 51.40 (29.88/21.52) points.

Keiser showed good speed in her routine to Rondo Capriccioso, however, underrotated the second jump in her opening triple Lutz-triple toe, as well as a double Axel. She also received an edge call on a triple flip, however, her fast and well-centered spins were particularly impressive. The 15-year-old earned the highest program component score (PCS) in this segment, and placed third with 50.70 (28.81/21.89) points.

Japan’s Miyabi Oba placed fourth with 49.16 (29.10/20.06) points for her short to Pugnami’s Tempest. The 2011 Japanese junior bronze medalist landed a triple Salchow-triple toe, the best triple-triple of the vent, and produced good level three footwork which earned many positive GOEs.

Gerli Liinamäe of Estonia landed a triple flip, triple Lutz-double toe, and a double Axel in her routine to Danse Macabre. The 17-year-old and also displayed very fast spins, and placed fifth with a score of 46.86 (29.24/17.62 points).

Miyahara, who received a time deduction, underrotated the second jump in a triple Lutz-triple toe and struggled on her Flying Camel spin in her short to Voices of Spring. The newly-crowned JGP Lake Placid champion otherwise landed a triple flip and double Axel, and produced a delightful level three footwork sequence to place sixth with 46.62 (28.48/19.14) points.

Keiser underrotated the second jump of her opening triple Lutz-triple toe, as well as triple Salchow later in her long program to Seasons by Alexander Glazunov. The 2012 Challenge Cup champion also received an edge call on her triple flip, but otherwise landed three more clean triples and showed good spins and footwork in her determined performance, placing first in the long with 105.63 (58.04/47.59) points. With a total score of 156.33, she rose to first overall with more than 11 points to spare.

Miyahara opened her long with a strong triple Lutz-triple toe, but then fell on an underrotated triple flip. The Japanese junior champion also underrotated a triple loop and double Axel, but otherwise landed a total of five triple jumps. The 14-year-old placed second with 96.74 52.39 45.35 points for her lyrical and charming routine to Romeo and Juliet, catapulting from sixth to third overall with a total score of 143.36.

Park singled her opening triple Lutz, as well as a triple flip later in her stirring routine to music from West Side Story. The 14-year-old otherwise landed four solid triple jumps and showed a very good level four spin that earned many positive GOEs, placing third in the long with 93.32 (47.10/46.22) points. With a total score of 144.77, the student from Seoul slipped to second overall.

Oba underrotated three triple jumps in her energetic routine to The Firebird, placing fourth in the long (89.37) and overall (138.53).

Titushkina, who stood in second after the short, placed sixth in the long (83.31) after underrotating four of her jumps, and finished fifth overall (134.71) points. 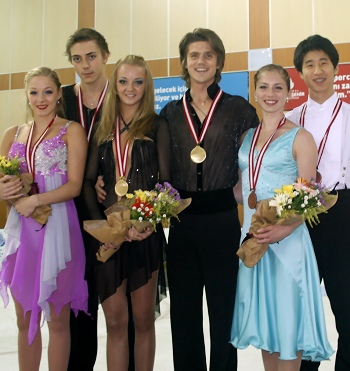 Alexandra Stepanova and Ivan Bukin of Russia were the clear winners after placing first overall with more than 11 points to spare. Germany’s Shari Koch and Christian Nüchtern earned the silver, while Canada’s Madeline Edwards and Zhao Kai Pang rose from second to capture the bronze.

Although Stepanova and Bukin placed first, they nonetheless had some technical problems, particularly with the blues pattern dance. Bukin missed both closed choctaws, and they missed the first key point near the start of the second blues pattern. Their straight line lift was only a level two, however, they wowed the nine judges with their opening level four twizzles which earned +2 and +3 GOEs across the board. The 2012 World Junior silver medalists also showed very good level three circular steps, and placed first with 59.32 (30.35/28.97) points.

Koch and Nüchtern skated a sultry and exciting routine to Feelin’ Good and Hey Pachuco, performing the best Blues patterns of the event and earning the highest technical element score (TES). The two-time German junior champions skated fast and close together with good unison, meeting all six key points in their Blues patterns. They earned a level four for all elements except for their level three circular steps, and placed second with 56.73 (33.07/23.66) points.

USA’s Kaitlin Hawayek and Jean-Luc Baker finished third with 54.56 (30.42/24.14) points in their JGP debut. The team, which has only been together since June, impressed with a level four curve lift and twizzle sequence, and showed good level three midline steps. Their routine to Minnie the Moocher and Give Me Some Rhythm contained some nice 1940’s swing era touches that added to the dance, and they showed very good speed across the ice.

Edwards and Pang were virtually tied with the Americans at 54.51 (31.65/ 22.86) points. The great connection the Canadian junior silver medalists have on the ice was obvious, and their teasing treatment of songs by Big Bad Voodoo Daddy was excellent. They earned a level four in all of their elements except for their level two midline steps, and met all six key points in their blues patterns.

USA’s Lorraine McNamara and Quinn Carpenter also met all six key points, but their midline steps were only a level two. The team, which showed loads of personality on the ice in portraying their quirky “Zombies on Ice” routine, finished a close fifth with 53.97 (31.65/22.32) points.

With the exception of level three for both step sequences, the top three teams received all level fours in this segment of the event.

Stepanova and Bukin were perfect in their dramatic routine to a modern arrangement of Bolero, earning 70 positive GOEs out of a possible 72 for all their elements. The 2012 Russian Junior silver medalists impressed with their lifts and twizzles, and showed very good diagonal and circular steps. They finished first with 88.41 (44.00/44.41) points, and overall (147.73).

Edwards and Pang placed second with 80.50 (42.51/37.99) points for their romantic and light-hearted ballroom interpretation to selections from Ludovic Bource. The 2012 JGP Courchevel champions displayed very good twizzles and circular steps, earning many positive GOEs from all the judges. With a total score of 135.01, the team rose from fourth to third overall (135.01).

Koch and Nüchtern produced a beautiful and emotional performance in their operatic piece, displaying strong skating and good edges. The Germans earned the second highest PCS score in the free dance, placing third with 79.48 (41.48/38.00) points, and edged out the Canadians by just over a point for second place overall (136.21).

McNamara and Carpenter were light, quick and flowing in their routine to selections by Gerard Presgurvic. The US junior bronze medalists finished fifth (74.19) in the free dance, placing fourth overall with a total score of 128.16 points.

Hawayek and Baker, who stood in third after the short, finished sixth (73.43) in the free dance and slipped to fifth overall (127.99). Hawayek took a fall during their level three circular steps, and their straight line lift was downgraded to a level two. 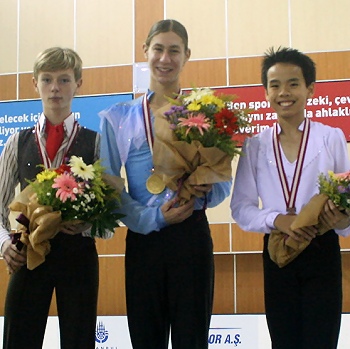 Brown underrotated and two-footed the landing of his opening triple Axel, but recovered to land a solid triple Lutz-triple toe and triple flip in his routine to The Question of U by Prince. The 2012 World Junior bronze medalist also earned many positive GOEs his footwork and spins to place first with 65.95 (33.27/32.68) points. The skater showed his versatility by incorporating a much more modern dance style movement in this program, doing great credit to his choreographer Rohene Ward.

Petrov gave a solid performance to Bach’s Fugue which featured a good triple Lutz-triple toe and double Axel. His only flaw was an edge call on a triple flip, but the 13-year-old otherwise showed good footwork and spins to earn 60.28 (33.28/27.00) points for a second place finish.

Nguyen also received an edge call on his triple flip, but was otherwise solid in his jazzy routine to music by Cole Porter, which featured a triple Lutz-triple toe and double Axel. The 2011 Canadian Junior champion showed lots of personality in his program, displaying good spins and footwork, and placed a close third with 59.09 (32.80/26.29) points.

Japan’s Shotaro Omori popped his opening triple Axel and received an edge call on his triple Lutz (in combination with a triple toe) in his tango routine, but otherwise landed a good triple flip. While the teen from La Mirada, Calif., did not earn any points for his change sit spin, he garnered many positive GOEs for his other two spins and footwork for a fourth (55.28) place finish.

Brown skated a contemplative, lyrical program to Liebestraum, highlighting every beat of the classical music. The current JGP Final champion underrotated his triple Axel and received edge calls on his two triple Lutzes and a triple flip. He also popped a Salchow, but otherwise impressed with very good level four spins and level three footwork – all of which received many positive GOEs. The program had great balance, with four of the jumping passes planned in the bonus time frame, and the 17-year-old placed first with 132.21 (63.35/68.86) points. His total score was 198.16 points.

Petrov had to step out of the landing in order to save his opening triple Axel in his routine to Morricone’s Once Upon a Time in America. The student from St. Petersburg also fell on the second jump of a triple loop-triple toe combination, and stepped out of a triple loop later in the program. Additionally, only one of his jumping passes received a bonus, but he delivered an energetic routine and finished second in the long with 114.17 (58.33/56.84) points, and overall (174.45).

While Nguyen’s long to selections by Bach was more serious than his short, the teen’s bubbling on-ice personality still showed. The Canadian received an edge call on both his triple flips, one of which was singled, and underrotated his second jump in a triple flip-double toe. He otherwise landed five clean triple jumps, placing third with 112.47 55.69 56.78 points, and overall (171.56).

Andrei Zuber underrotated a double Axel in combination with a double toe-double loop, but otherwise landed seven triple jumps to place fourth in his routine Mister X by Emmerich Kalman with 112.36 (59.24/53.12) points. With a total score of 165.47 points, the student from St. Petersburg placed fifth overall in his JGP debut.