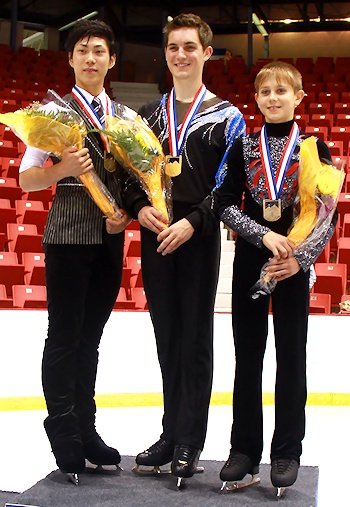 USA’s Joshua Farris won the men’s event by over 36 points, winning his fourth JGP gold medal. Keiji Tanaka of Japan took the silver, while Canada’s Roman Sadovsky catapulted from eighth to third place overall to capture the bronze in his debut.

Farris appeared focused and and in control in his short program to Yo-yo Ma’s Suite for Solo Cello No 1 in G Major, with the only error being an edge call on a triple flip. The 17-year-old opened with a very good triple Axel and triple Lutz-triple toe, and displayed good spins and footwork which were awarded positive Grades of Execution (GOE). He earned 72.20 points, placing first with nearly 15 points to spare.

In the long, Farris reeled off a triple Axel-triple toe, followed by a quadruple toe and triple Lutz-double toe. The 2012 World Junior silver medalist landed three more triples, however, he received an edge call on a triple flip (in combination with a double toe-double loop) and underrotated a triple toe. Nevertheless, the teen from Colorado Spring, Col., once again showed good footwork and spins, and was awarded 146.49 points for a first place finish in the long and overall (218.69).

Tanaka placed second after the short with 58.63 points. The Japanese junior silver medalist landed a solid triple flip, however, he turned out on his second jump in a triple toe-triple toe combination and struggled on his final Flying Camel spin.

The 17-year-old from Okayama landed five triples in his long to program to music from The Untouchables soundtrack, but fell on both a triple and double Axel, and received an edge call on a triple Lutz. While his footwork was good, the 2011 World Junior silver medalist once again had problems with his Flying Camel spin. Despite the errors, he placed second in the long (123.87) and overall (182.50), winning the second silver JGP medal of his career thus far.

Sadovsky, who stood in eighth after the short (50.91), placed third in the long (107.86), and with a total score of 158.77 points, captured the third spot on the podium. Although the Canadian junior silver medalist fell on his triple flip in both programs, his long program to music from The Man in the Iron Mask featured four good triple jumps and he was awarded positive GOEs for his spins. 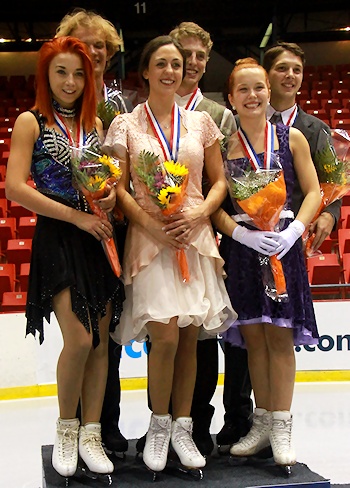 USA’s Alexandra Aldridge and Daniel Eaton edged out Evgenia Kosigina and Nikolai Moroshkin of Russia for the gold, while Canada’s Andreanne Poulin and Marc-Andre Servant rose from fourth to capture the bronze.

Aldridge and Eaton delivered a solid short dance, placing second with 53.48 points. Despite earning higher component scores than the leaders, the current U.S. junior champs only met one out of six key points in their Blues pattern dance and received a level two on their midline steps.

The reigning World junior bronze medalists were polished and smooth in their “Fiddler on the Roof” routine, displaying very good level four twizzles, three level four lifts, and a good level three circular step sequence. The team earned positive GOES for each of their elements, and placed first in the free dance (83.32) and overall (136.80).

Kosigina and Moroshkin were very confident in their routine Blues and Swing short dance to the music of Ronan Hardiman, hitting all key points on both sections of their patterns. The team racked up many positive GOEs for their level four curve lift and twizzles, as well as their level three circular step sequence, and placed first with 59.44 points.

The team from Odintsovo did well in their energetic free dance (75.80) to a Michael Jackson Medley, opening with a strong level four rotational lift and twizzle sequence, followed by good level three diagonal steps. They lost several points, however, when they only earned a level one on a prematurely-ended straight line lift.

Poulin and Servant, who were fourth after the short dance (45.95), delivered a cheerful routine to music from the soundtrack of  Fantastic Mr. Fox which featured a nice curve-rotational combination lift, level three twizzles, and a level four combination dance spin. The Canadian junior champions placed third in the free dance (68.76) and overall (114.71).

Daria Morozova and Mikhail Zhirnov of Russia, who sat in third (47.22) after the short dance, placed sixth in the free dance (64.27) after Morozova took a hard fall at the very beginning of the twizzle sequence. As a result, the Muscovites missed the podium, placing fourth overall with 111.49 points. 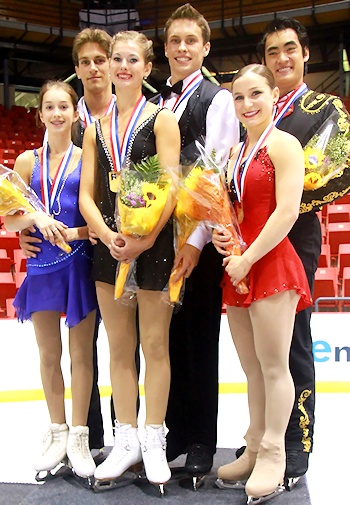 From Left to Right: Vasilisa Davankova and Andrei Deputat (RUS), Margaret Purdy and Michael Marinaro (CAN), and Madeline Aaron and Max Settlage (USA)

Margaret Purdy and Michael Marinaro of Canada rose from second place to win their first JGP gold, while Russia’s Vasilisa Davankova and Andrei Deputat took the silver in their first JGP event. USA’s Madeline Aaron and Max Settlage moved up from fourth to capture the bronze.

Purdy and Marinaro were solid in their lyrical routine to O Mio Babbino Caro by G. Puccini. The team produced a double twist, solid side by side double Axels, and a throw triple Salchow to score 47.84 points for second place, trailing the Russians by 1.13 points.

The 2010 Canadian junior national champions fared just as well in their long program to music from The Artist soundtrack. The only notable error in their lyrical routine was a slight two-footed landing on a triple throw Salchow. The team otherwise produced good side by side jumps, including a a triple toe-double toe combination and double Axels, as well as a throw triple loop and level four spins. They placed first in the long with 96.88 points, and with a total score of 144.72, rose to first overall.

Davankova and Deputat had a solid short program as well, which featured side-by-side double Axels, a throw triple Salchow, a double twist, and a level four lift. Despite having the lowest program component scores of the top five teams, the current Russian junior national champs placed first with 48.97 points.

In their long program to music from Once Upon a Time in New Mexico, Deputat two-footed the landing on the opening jumps, not completing the combo, and Danakova stepped out of the landing of the throw triple loop. The team also received no points for the final combination spin, but otherwise executed a good double twist, throw triple flip, and level four lifts. The 2012 World Junior bronze medalists placed third with 84.14 points, slipping to second overall with 133.11 points.

Aaron and Settlage looked strong in their short program to The Swan, which was highlighted by a good double twist and solid double Axels. However, Aaron slightly touched down with her hand on a throw triple Salchow, and they received no points for their pair combination spin, which was out of synch. They were ranked fourth (43.82).

The Americans showed good character in their Carmen routine, which was highlighted by a double twist, throw triple Salchow, and level four lift. Early on, however, Settlage stepped out of the opening triple Salchows and Aaron struggled coming out of a death spiral at the end. They placed second in the long (86.62) and moved up to third overall (130.44). 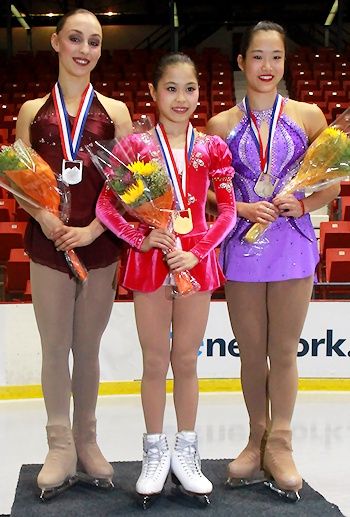 Japan’s Satoko Miyahara took the gold in the ladies event, while USA’s Courtney Hicks rose from fourth to capture the silver. Teammate Angela Wang (USA) catapulted from eighth to third overall to win the bronze.

Miyahara opened her short program with a triple Lutz-triple toe, but received an edge call on the Lutz. The reigning Japanese junior champion went on to land a triple flip and double Axel, and showed good spins and footwork in her routine to Strauss’ Voices of Spring, earning 54.76 points for first place.

The student from Kyoto also received an edge call on both triple Lutzes in her expressive long program to Romeo and Juliet, but otherwise landed four more triples. The 14-year-old also displayed very good level three straight line steps, as well as three level four spins, and placed first with 106.89 points for a total score of 161.65.

Hicks stepped out of her triple loop combination in her short program to Bond’s Korobushka, but otherwise landed a solid triple flip and double Axel. The 16-year-old earned positive GOEs for all other elements, impressing the judges with her spins and footwork. She finished fourth with 51.36 points.

The 2011 U.S. junior champion underrotated her opening jump combination, but was otherwise clean with the exception of a popped double Axel. She landed five triple jumps and racked up positive GOEs and high levels for her spins and footwork to place third with 102.41 points. With a total score of 153.77, she was able to move up from fourth to second overall.

Wang, who sat in eighth after the short (44.71), placed second in the long (105.69) with her lyrical performance to music from the Ladies in Lavender soudtrack. The 16-year-old was nearly flawless, reeling off a total of six triple jumps and earning many positive GOEs for her level three spins. With a total score of 150.40, the American leapt to third place overall.

Russia’s Evgenia Gerasimova received an edge call on her triple Lutz (in combination with a double toe) and had a tight landing on a double Axel, but otherwise landed a good triple flip and earned a level four on two of her spins in her short program to The Barber of Seville. She placed a very close third (52.30), practically tying Park for second place.

The teenager from Saint Petersburg had problems on her jumps in the long, however, falling on a triple Lutz and double Axel. She finished fifth (93.38) and slipped to fourth (145.68) overall.