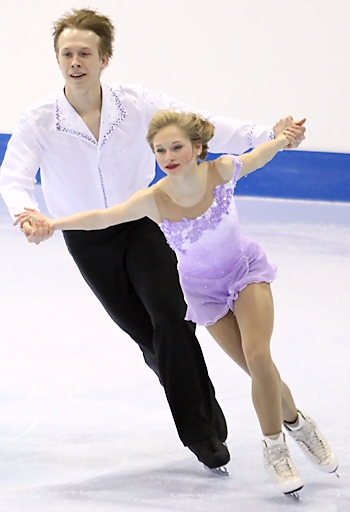 It was a dream season for 2012 Canadian novice pairs champions Hayleigh Bell and Alistair Sylvester. The duo not only captured their first national title in Moncton, N.B., but they closed out their season with a trip to the Junior World Championships in Minsk, Belarus where they finished in 12th place.

Even though half a year has passed and the new season has already begun, the teenagers still have trouble summing up last season in words.

“It is hard to describe,” Bell, 16, admitted. “We had worked really hard together and had really come together and bonded as a team. Winning this title has given me a lot of confidence heading into the upcoming season.”

Sylvester learned a lot from winning in Moncton, and is carrying that knowledge with him as he and Bell prepare for the new season.

“Winning the title was an amazing experience, and has been very humbling,” said the 18-year-old. “It showed us that all our hard work had paid off, and has taught us the importance of working as a team and maintaining a positive attitude.”

“At the same time, it also has put some pressure on for the upcoming season, but we are ready and excited to put everything we have into our training,” he added.

With a small group of age-eligible teams competing in Moncton, Skate Canada made the unorthodox decision to name Bell and Sylvester to the Junior Worlds team. They finished a respectable 12th place in their international and junior debuts.

“It was quite surprising, and we both feel very honored for having been given that opportunity,” Sylvester said. “The thing I remember most is the energy in the rink and the incredible roar of the huge audience encouraging the skaters to perform their best.”

Bell was equally amazed by the opportunity.

“I was extremely surprised,” she admitted. “I remember the thrill of competing against people from all over the world and competing in front of so many people that were there to watch us compete. I have never competed against that many pairs teams or in front of that many people.”

After the competition, Bell and Sylvester headed back to their training base in Barrie, Ont., and shifted their focus to the new season. With a title and international experience under their belts, the duo was motivated to work even harder for the 2012-13 season.

“This summer, we have been working on our presentation and connection in our programs,” Bell offered. “We have also been working on some technical elements—things like making our twist bigger and stronger and increasing the consistency of our throw triples.”

Bell and Sylvester teamed up three years ago, and continue to work with long-time coach Lee Barkell and choreographer Kelly Johnson at the Allandale Recreation Centre in Barrie.

“Lee is our primary pairs coach, and he is responsible for running programs and teaching and correcting elements,” Bell explained. “He also does off ice-lifts with us; teaching us new ones and helping make the program lifts better. In addition to being our choreographer, Kelly also works the programs with us. She is an ice dance coach, and we sometimes run our footwork with her as well.”

Johnson has selected and choreographed a new short program for Bell and Sylvester to Cecil Mack’s Charleston. The duo will skate to Chopin’s Fantasie Impromptu for the free skate—a program also choreographed by Johnson with input from former ice dancer Tyler Myles.

“Ryan has been an incredible asset to our team in terms of strengthening the foundation of our skating,” Sylvester said. “He takes our elements on the ice and breaks them down to their simplest forms off the ice. He has been a great help in injury prevention, and also helps with some of the mental game as well.”

Now that school is back in session—Bell is a grade 11 student, while Sylvester is grade 12, the duo has shifted to their fall training schedule. A typical day for the tandem includes two pairs sessions, one or two singles sessions, and about 90 minutes of off-ice each week day.

“Some days we skate early morning sessions, but mostly we skate in the afternoon,” Bell said. “I’m in a co-op program in school that allows me to skate during the day.”

Bell attends school in Barrie, where she lives with her mother. Her school is within walking distance of the rink. On the weekends, she travels to Acton, Ont., to visit her father and sister.

“My sister, Kaitlyn, used to compete in singles and at times, we competed against each other,” she explained. “She just turned 18, and we recently drove her to Nova Scotia to start her first year at Acadia University where she is majoring in Environmental Issues and Sustainability.”

Sylvester, whose family lives more than two hours away in Stratford, Ont., boards in Barrie in order to train. He attends Country Day Private School in King City, a 40 minute commute from his training site.

“Balancing (skating and school) can be quite stressful, but over time it hasn’t really been a problem,” he admitted. “Sometimes I get behind on school work, but the schools I have been to have been fairly understanding.”

Sylvester has one sibling who is a competitive dancer who trains in a studio in Stratford.

“I would just like to skate the way that we have been training and improve our scores from the last competition,” said Bell. “I love to travel and to compete, and I’m excited to combine two of my favorite things.”

Sylvester is ready to get back to competing.

“We have been training very hard for this event and are very excited to get o the ice and show the world what we can do,” he said.

The goals for the season are simple—to stand on the podium at the 2013 Canadian Championships in London, Ont., and to earn a return trip to the Junior World Championships.

“It is an incredible honor to represent Canada in competition,” Sylvester said. “We hope to get back to Junior Worlds so that we can do even better than last year.”