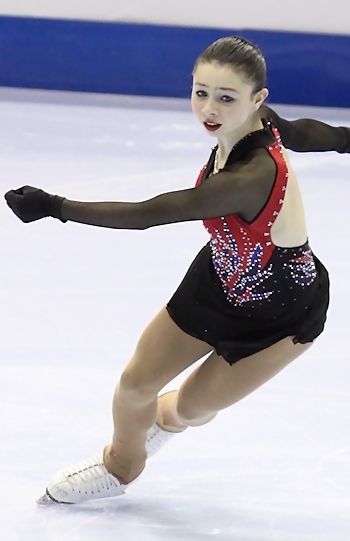 Madelyn Dunley stood atop the novice ladies podium at the 2012 Canadian Figure Skating Championships earlier this year in Moncton, a small city in southeastern New Brunswick. It was the fresh-faced skater’s second try at the title as she finished fifth a year earlier in Victoria, B.C.

“I remember standing in the center of the ice after my free program and realizing that I had just skated a season’s best skate,” recalled Dunley.

“I remember taking my bows and knowing that my results would be good and that the goals I came into the competition with were hopefully going to be achieved,” said Dunley.

The gold medalist began skating at the age of seven under the guidance of coach Nancy McDonell-Lemaire, with whom she still trains today.

“She works a lot with me on program execution and jumps,” Dunley explained. “I also work with Pavol Porac and Ann Fisher. Pavol is my choreographer and works with me on program execution. He also works with me daily on my stroking, turns, and edges. Ann is my spin coach. I work with Ann on improving my spins and coming up with level four spins that we are able to put into my programs. I love my coaching team.”

Originally from Milton, Ont., the Dunley family recently moved to the small town of Campbellville about 15 minutes away. She still trains in Milton, and attends school just minutes away from the rink.

“I am a grade 10 student and go to school from 8:10 AM until noon,” she explained. “Unlike most students who take five periods of classes every day, I only take three and use the other two as spares so I am able to train.”

Even with the reduced course load, Dunley sometimes finds it difficult to juggle the responsibilities of being a student-athlete.

“I find that if I do not have a teacher that understands my level of commitment to skating, it becomes difficult to explain why I may have to miss classes for competition, physiotherapy, or training,” she explained. “Keeping on top of homework makes it tough to balance school and skating. With a demanding daily schedule, I need to find the time to fit in my schoolwork, as well as time to rest and recover from training.”

Dunley trains at the Milton Sports Centre from Monday through Saturday, and laces up her skates as soon as she can get to the rink after school.

“I usually walk from school to the rink, and then I am on the ice for an hour or so,” said Dunley. “After that, I have off-ice training for an hour, and then proceed back on to the ice for a couple more hours.”

“I take part in many different off-ice activities to help my training,” Dunley continued. “During the week, I work on balance, core stability, cardio, stamina, plyometrics, ballet, artistic movement, jumping rotations, yoga, and Pilates. I have the opportunity to participate in all different types of fitness, and learn a lot about how my skating is related to off-ice work.”

Dunley has decided to compete on the junior level this season, and has been working furiously since winning her title to prepare for the increased level of competition.

“The transition from novice to junior is a big jump,” she acknowledged. “Not only are you trying harder elements, but the rules and element requirements change. I feel that in order for myself to grow and to succeed, I must be able to have trust in my training, have some patience, and believe in myself.”

To make the transition a bit easier, Dunley is working to increase the level of difficulty in her programs, and is also focusing a considerable amount of time on improving her overall skating.

Dunley has prepared two new competitive programs for her junior debut, both of which are tailor-made to showcase her gift of storytelling.

“My short program is music from the movie Amélie, revealed Dunley. “The story of the program is about a mime that loses their favorite possession—a flower. Later into the program, the wind blows it back, and I become happy and thankful that my flower came back to me.”

The free skate is set to music called The Devil’s Dance, and shows a completely different side to the young skater.

“In this story, I am a villain who has been poisoned, and throughout the program, I am slowly dying but aggressively trying to fight for my life,” Dunley explained. ‘At the end of the program, the poison takes over and I die.”

Outside of school and skating, Dunley likes to bike, dance, and surf the internet.

“I love to spend time with my friends,” she said. “Some of them I only see once or twice a day between classes, and some of them go to different schools.”

Dunley has an 18-year-old sister who is an avid horseback rider and recently started university with plans of becoming a veterinarian. Her 13-year-old brother just started high school and is a rep hockey player.

Dunley has been named as an alternate to the Junior Grand Prix series, but she has yet to be formally invited to any of the remaining competitions. In the meantime, she plans to compete at the George-Etier competition in Shawingan, Que., at the end of the month to gain valuable experience as the nationals qualifying season approaches.

“What I am most looking forward to this season is skating my best,” summarized Dunley. “I have struggled with an injury all summer and have been limited with what I can do. I am definitely looking forward to being able to try all my jumps and spins again, and being able to skate well at every competition I go to. I want to be able to have the best skate I am capable of. My goals for this season are to make it to nationals in Mississauga, Ont., compete at my best, and get very successful results.”