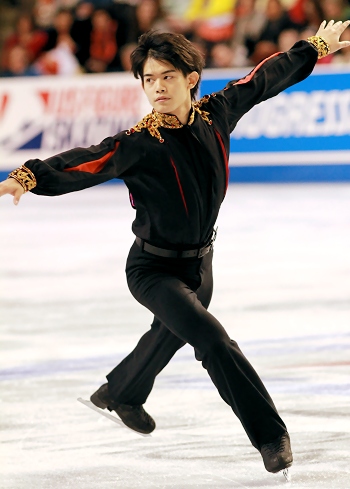 The men’s podium at the 2012 Skate America figure skating competition was swept by team Japan, marking the first time in the event’s history that a country other than the United States snatched all three medals.

Leading the way was 2011 World silver medalist Takahiko Kozuka who rallied from an almost ten-point deficit after the short program to overtake teammate Yuzuru Hanyu for the title.

“My performance was just okay, I think, but I won so I am very happy,” Kozuka said with a smile.

Kozuka opened his Introduction et Rondo Capriccioso Op. 28 program with a quad toe, but then underrotated the second one (in combination with a double toe). The-23 year-old also landed five clean triple jumps to earn 166.12 (81.84/84.28) points for a first place finish in the long, showing a technical element score of more than six points over the other competitor’s. His total score was 251.44.

“This season my focus has been on my skating along,” said the Japanese silver medalist. “I have been accumulating good practices so far and hopefully I can be injury free so that I can continue to build throughout the season.”

“Today’s performance was very close to my worst,” said the 17-year-old. “I haven’t even skated that bad in practice. I know the importance of skating well in both my short and my free skate, and I have many things to work on in my free. I will practice hard and prepare for my next competition.”

The Japanese bronze medalist bounced back to land five clean triple jumps in his Notre Dame de Paris program, but fell his final jump, a triple flip. His free skate was judged as the third best of the night at 148.67 (72.11/79.56) points, but his total of 243.74 points kept him in silver medal position.

The surprise of the competition was perhaps Tatsuki Machida, the 22-year-old from Hiroshima, who won his first medal of any color on the Grand Prix—a bronze.

Machida skated confidently and with appropriate passion in program to The Firebird, pacing second in the free skate with 154.17 (75.03/80.14) points.

“Even though today was not perfect, I was able to do well,” Machida offered. “I have to thank all of the spectators who helped me all week long and especially tonight so that I could get my first Grand Prix medal.”

Machida landed eight triple jumps, but fell on a quadruple toe loop attempt near the beginning of his program. His total score of 229.25 points is a 12-point improvement from his previous personal best.

“I’m not as experienced as (Kozuka and Hanyu), but I just try to skate well at all of my competitions,” he explained. “I want to build up my reputation with the international judges, and selling my skating to them is very important to me.”

Finishing in fourth place was Russia’s Konstantin Menshov, who increased his personal best to 212.53, a jump of nearly ten points. This is Menshov’s highest placement in a Grand Prix event ever.

American champion Jeremy Abbott struggled to a fifth place finish, and seemed dejected after his program to Les Miserables’ Bring Him Home.  The 28-year-old earned a total of 211.35 points, and is likely out of the running for a fourth consecutive trip to the Grand Prix Final.

“You know, it could be my head,” said the U.S. champion. “I’ve been working really hard with my sports psychologist and we’ve had a lot of breakthroughs and really good things. There’s just something that’s missing that nobody can put a finger on. It’s just going through the process to find, and I pray that we find it before all of this is said and done.”