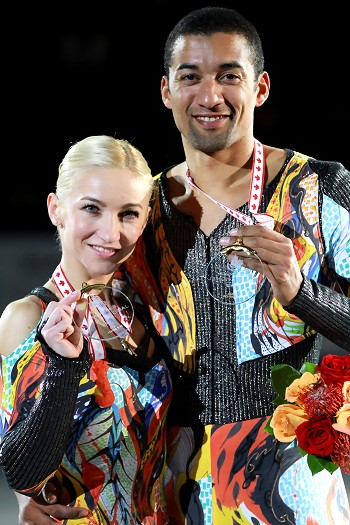 Four-time World champions Aljona Savchenko and Robin Szolkowy of Germany had a strong start into the pre-Olympic season at 2012 Skate Canada this past weekend. In spite of Savchenko fighting a bad flu and a few errors, they were the clear winners of the Pairs figure skating event.

Each year, the skating world is curious to see what the innovative team and their coach and choreographer Ingo Steuer come up with. The talk of the town is not revolving so much around the programs as it is the costumes.

The skaters wore skin tight body suits in very expressive colors in both short and free program. As always, with something new and different, there were mixed reactions.

Some people loved the costumes and were excited about the new look, while others hated them or just didn’t get them. A Canadian reporter dissed them even as “nauseating” and “something that looked like the cat threw up”.

The team collaborated for the first time with a design studio from their home town of Chemnitz.

“They designed the costumes for both programs,” said Szolkowy. “We met quite often, looked at them, discussed everything with them. It was a real collaboration. Personally, I think these costumes are great. This kind of art is truly mine. Obviously, there are people who said ‘what the heck is this’, but me and others are standing behind it.”

The 33-year-old takes the criticism in stride.

“All three of us have a strong character and we can deal with it when someone says that they don’t like it,” he noted. “When we say ‘ok, let’s try that’, then we just do it. We don’t have to push through with it by any means, though. We can take a step back as well.”

It looks like the hotly discussed costumes won’t show up again at the next competition.

“I think we’ll do new ones. We watched the videos and I felt the costumes didn’t bring out our lines,” Savchenko explained. “We still have some time until the next competition, so we’ll see what we come up with. These costumes were ready in the last minute only.”

The 2010 Olympic bronze medalists are currently risking a costume violation deduction as men are not allowed to wear tights. There was no deduction given at Skate Canada, however, this could change at any time in the future.

“I remember the rule, but I didn’t really think about it when we made the costumes,” Steuer admitted. “I believe we’ll make some adjustments.”

Due to the massive discussions of the costumes, the programs themselves were nearly were pushed into the background. However, they are indeed interesting and deserve attention. For the short, the team chose Kismet by Bond, a somewhat mystic, flowing piece of music. Their long program is to the intense Flamenco Bolero by Gustavo Montesano, based on the very famous Bolero by Maurice Ravel.

“It has nothing to do with (Jayne) Torvill and (Christopher) Dean,” Steuer pointed out right away. “We do not try to compare to them. We just want to interpret this music, which is not so easy.”

Originally, Savchenko and Szolkowy had originally planned to keep their successful Pina program from last season.

“We wanted to keep it to be able to focus more on the elements that we are training with in regards to the Olympic Games,” Steuer explained, referring to the throw triple Axel, the side by side triple Salchow, and the reverse lasso lift.

However, a rule change stopped this plan.

“The spiral sequence has become a spiral step sequence, which is something different, a kind of mixture of both,” Steuer explained. “I tried to incorporate that into the Pina program, however, when a program is basically perfect and you are trying to make it even better with a new element, it can backfire. We quickly realized that it wouldn’t be an improvement, and if there is now improvement, we are doing a new free program.”

The team has been wanting to skate to Kismet for some time, now.

“We have a whole stack of music, and each year, we listen to all of it when we are searching for a new program,” Szolkowy offered.

He and his partner enjoy the new programs.

“These are definitely programs we are competitive with,” Szolkowy stated. “The first competition is always the hard test for the programs. The elements are one thing, but the other thing is if the package is right; if the programs are accepted in the way they should be accepted or if people are saying, ‘oh my God’. In a worst case scenario, they say the programs are bad and the costumes are bad.”

The programs, especially the the long, were skated a little tentatively as Savchenko battled a cold in Windsor. After the first night, she woke up with a sore throat and clogged nose. The first practice was fine, but the night before the competition her condition worsened.

“I never felt worse. I didn’t think I’d be even able to do the short,” Savchenko revealed, “but then I felt better in the rink than in the room. Probably because it is colder.”

The 28-year old pushed through it.

“I am very proud of myself that I was able to hold up. Robin was very supportive,” she said.

“She asked me if she was able to do the free program and I said, ‘yes, you are, of course, because you are strong,'” Steuer recalled. “It was quite critical, especially since she had a high temperature the night before the short. We have to take it step by step because the health is important.”

The preparation for the season went well and was not interrupted by major health problems. The team went to Florida for a training camp in spring and also attended a few shows.

“Then we had time to prepare calmly for the season in Chemnitz. We trained the program a lot in parts,” Szolkowy explained.

They continued working on the throw triple Axel, but did not risk it at Skate Canada.

“The (throw) Axel is still in our program and the (triple) Salchow as a solo jump is back.,” confirmed Szolkowy. “It is working better than the double Axel in practice.”

“One goal for this season is to include the throw triple Axel in the short and at the end of the free program,” added Steuer, “but the skaters also need to pace themselves. The older you are, the harder it gets. Therefore, it is important to take a break sometimes.”

The skaters and their coach don’t know yet if there will be changes in their elements for the next Grand Prix in Paris in mid-November.

“We will see what we do,” said Savchenko. “First of all, I have to get completely healthy.”

“The cards are shuffled in a new way each year,” said Steuer. “This year we’ve started like this, now we’ll have to see how it continues. We have a certain base to build from, and as four-time World champions, you have a certain standard. To score 200 points in your first competition in spite of some mistakes is great, but it doesn’t mean that the others (the competitors) are weak. We’ll see what happens next. There is still a little time (before Paris), and we have major goals.”