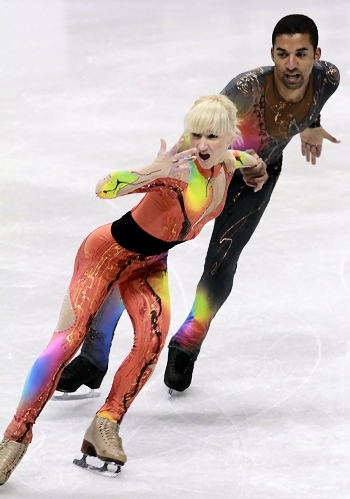 Savchenko and Szolkowy once more proved why they have been at the top for so long now. Each year the Germans and their coach Ingo Steuer come up with something new and different. This time, they chose an elegant theme with Kismet, showing a lot of flow and dance moves in their routine. The costumes certainly were something special. The skaters wore colorful, graffiti-style body suits that a design studio from their home town had created for them.

The current Olympic bronze medalists made the elements looked easy, opening with their trademark huge triple flip, followed by solid triple toes and a level-three triple twist. They picked up a level four for the death spiral, the side by side spin, the step sequence, and the lift that featured a new position.

“This was the first competition of the year,” noted Szolkowy. “All elements were clean, we got all our levels, and we are looking forward to tomorrow.”

However, coach Ingo Steuer revealed that Savchenko came down with a cold and high temperature last night.

“She has trouble breathing,” he said, adding that he hoped that Savchenko’s condition will improve over night and the couple will be able to compete in the free program on Saturday.

Duhamel and Radford’s program to an altered version of La Boheme was highlighted by a triple twist, a throw triple Lutz, and side by side triple Lutzes that were a bit shaky, but then again, who does a triple Lutz in pairs? The Canadian champs earned a level four for the lift, the spin and the footwork to score 64.49 (35.35/29.14) points.

“We are fairly pleased with our Short Program,” Duhamel offered. “We came here prepared to skate better than that, so we did leave some points on the table. We had a couple of stumbles during the choreography on my part, but other than that it went well.”

Berton and Hotarek performed to Paint It Black  by the Rolling Stones and sported fancy black costumes. They completed a solid triple toe, a throw triple loop and level-four footwork, but the death spiral merited only a level one. The Italians collected 59.79 (31.13/28.66) points.

“Our practices were close to this performance,” said Berton, “but I struggled with the side by side spin. Apart from that, we are happy.”

Paige Lawrence and Rudi Swiegers of Canada are sitting in fourth at 52.88 points. Skating to Robin and Marian, they nailed the triple toe – an element Lawrence had struggled with in practice – but their triple twist and death spiral got only the base level. Swiegers stumbled twice in the step sequence that subsequently received a level one.

Daria Popova and Bruno Massot from France came in fifth with 48.43 points. Their program to La Belle Histoire included nice triple toes and a level-four lift, but he caught her late on the high triple twist and she crashed on the throw triple loop.

USA’s Lindsay Davis and Mark Ladwig delivered a solid debut on the Grand Prix. They produced a triple Salchow and throw triple loop, but lost points on their messy triple twist, as well as their level one footwork and death spiral. The team from Florida, which have only been skating together since this spring, finished sixth (47.05 points).

Teammates Tiffany Vise and Don Baldwin are standing in seventh place at 46.47 points. Vise fell on a cheated triple toe and touched down with her hand on the throw triple flip, however, they earned two level fours and two level threes for their non-jump elements.