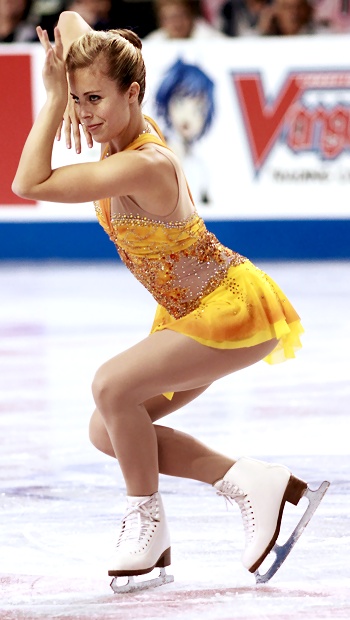 USA’s Ashley Wagner performs to music from “Samson and Delilah” at 2012 Skate America.

USA’s Ashley Wagner has shed that ‘Almost Girl’ moniker that she gave herself last season, and has transformed into the ‘It Girl’, as she won her first Grand Prix title today in Kent, Wash., at Skate America.

The win makes the 21-year-old the 13th American lady to win the title, and sets her up nicely for a trip to the Grand Prix of Figure Skating Final in December.

“That was the one phrase that I honestly think that I only said once,” she said of the moniker. “Everybody heard it and latched onto it. It’s certainly how I’ve felt in years past. I feel now that I can let that go. It’s not that I’m a different person than I was. I’m the exact same person. I just have the mental strength to perform how I do in practice, which makes it a lot more enjoyable.”

Dressed in yellow, Wagner made a sultry ‘Delilah’, captivating the audience from the first note of her Samson et Delilah music. The U.S. champion landed six clean triple jumps, placing first in the long program with 127.76 (63.83/63.93) points, and earned the highest component scores of the afternoon.

Wagner’s total of 188.37 points was a bit lower than her personal best, but it was higher than her score from the World Championships earlier this year where she finished in fourth place.

“After the short program, I definitely thought that it was plausible to win the whole event,” Wagner admitted. “It was a good and bad thing, because I started to worry about it. I was happy that I was able to go out there and keep my nerves under control and stay focused on what I wanted to accomplish. For my first Grand Prix gold medal, it’s a good day for me.”

Christina Gao, a perennial also-ran who has finished in fifth place at the last three U.S. Championships, finished second in the long with 117.62 (60.64/56.98) points. With a total score of 174.25 points, she finished second overall to capture the silver medal—her first of any color on the Grand Prix, surprising everyone including herself. Her Libertango program built as it went along, and Gao eventually brought the Kent crowd to its feet with a well-deserved standing ovation.

“I was a lot more confident coming into this competition than I ever have been before only because of the way I have been training,” the 18-year-old said. “My training has been going really well. I felt settled. As I landed more and more jumps, I was like, ‘Oh my gosh, this is actually happening how I’ve been training’, and I got more and more excited.”

Gao landed six triple jumps, but was unable to match her teammate in terms of levels. Her score of 174.25 points is a new personal best for the Harvard freshman.

“I was kind of nervous before the program,” the former U.S. Junior bronze medalist admitted. “Last season on the Grand Prix I didn’t do well at all, so this past summer was really hard for me. I was debating if I should continue skating or not because of school and everything, and now I’m really, really glad I did. I’m relieved. It’s like, ‘OK, I made a good decision’. I think it was the right decision for me.”

Slipping to third place was Russian champion Adelina Sotnikova, who started strong nailing a triple Lutz-triple toe loop, but struggled in the middle of her Burlesque soundtrack program. She placed third in the long with 110.03 (51.36/59.67) points.

“I’m very pleased that I did the triple-triple combination,” Sotnikova said. “I really wanted to do that. I’m completely unhappy about missing that second triple flip and about doing an extra combination.”

Sotnikova was referring to a triple loop-double toe-double loop that was nullified as an illegal element because it was the third combination of the program. Had the element been counted, the 16-year-old would have likely won the silver medal. She scored a total of 168.96 point in the competition.

“I know what I have to do to be able to perform as well as I did in 2010 when I skated clean in all my competitions,” added the student from Moscow. “For this year, I really want to go to the European and World Championships, and I will do everything I can to be there.”

Finishing in fourth place was Italian champion Valentina Marchei with 158.79 points, while Japan’s Haruka Imai finished in fifth with 157.72 points.