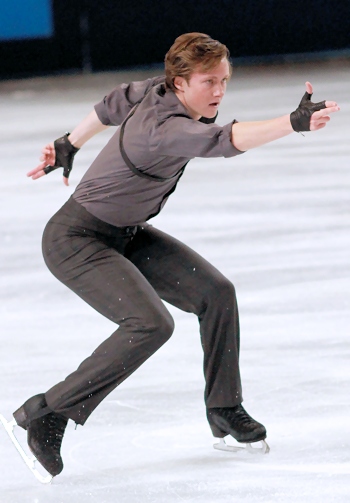 Abbott was devastated at Skate America after a poor free skate left him in fifth place, however, he fought back in Paris.

The American reeled off a triple flip-triple toe, a triple Lutz, and a triple Axel in his creative “Spy” program by Nathan Lanier. His flying sit spin merited a level four, but the footwork only earned a level two, and he finished first with a new season’s best of 81.18 points (40.35/40.83).

“After Skate America, I am very happy to be in this position,” said the 27-year-old. “It’s been a bit of a struggle since then with my back, but we’ve been taking care of it and trying to make sure that everything is ready for this competition. We had to scale it back a little bit and not try the quad, but just put out a clean, solid skate.”

Mura skated to Malaguena and landed a triple Axel and triple Lutz, but the quad toe-triple toe was not clean and the second toe was underrotated. He picked up a level four for the combination spin and a level three for the other spins and the footwork.

“I am surprised to sit in second place after the short program,” confessed the 21-year-old. “I think I did what I could. I landed the quad and the triple Axel, so I think I learned a lesson from Skate Canada.”

Mura also pointed out that the good results of the other Japanese men are motivating for him.

While Abbott had to deal with his back, Joubert was recovering from an illness. After withdrawing from the Cup of China, the Frenchman had to go to the hospital for treatment and needed to rest for one week. He resumed practice just this past Monday.

Joubert’s program to Genesis by Justice and Aerodynamic by Daft Punk featured a quad-double toe, a triple Lutz, and a level-four change sit spin. On the down side, he did a three-turn out of the triple Axel, and the combination spin was only graded a level one. The former World champion scored 75.46 points (38.73/36.73).

“I am very proud of my short program, because I am not ready for this competition,” said the 28-year-old. “The last two weeks have been difficult for me because I was sick, but I fought on the ice and I gave it a 100 percent. I did not do a perfect program, but it gives my confidence for the future.”

The three-time European champion feels that the worst is behind him.

“The short program is more difficult,” Joubert explained. “Tomorrow it will be easier mentally, but physically it will be more difficult. I want to enjoy my free skating and I want to show a good performance. I am not ready, but I will try to give my best.”

Jorik Hendrickx from Belgium stepped out of his triple Axel, but recovered to hit a triple Lutz-triple toe and a triple loop in his jazzy routine to finish fourth at 68.90 points (36.83/32.07).

Jinlin Guan of China opened his program to Danse Macabre with a quad toe, but stumbled on the landing. Despite the mistake, he landed a double Axel and a triple Lutz-double toe, and earned a level four on two of his spins to place fifth with 65.77 points.

Teammate Nan Song was sixth with 65.75 points. He fell on an underrotated quad toe, but hit a triple Axel and a triple Lutz-double toe.

Florent Amodio came to the event with a lot of ambitions and hoped to win the event in order to qualify for the Grand Prix Final, however, the French silver medalist had a disappointing performance. He fell on the both the quad Salchow and triple Axel, and only did a double Lutz. He also received no level for the change sit spin, and faded to seventh with 60.13 points.

France’s Chafik Besseghier and Tomas Verner of the Czech Republic did not fare much better. Besseghier’s quad toe was downgraded, while Verner underrotated and fell on his. The Czech also popped his triple Axel.