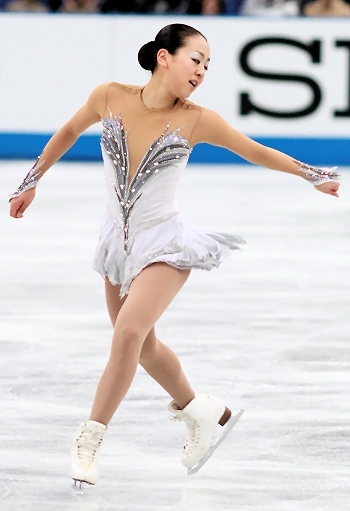 Mao Asada of Japan edged out teammate Akiko Suzuki by just 0.05 points to capture the gold medal at the 2012 NHK Trophy Saturday. The bronze went to USA’s Mirai Nagasu.

Asada had to skate last and ran into trouble immediately when she doubled the first jump, a loop, in her program to Swan Lake. The overnight leader recovered to nail a double Axel-triple toe and a triple flip before doubling the Lutz and another flip. The Olympic silver medalist also popped the the Salchow, and only managed to land one more triple, a loop.

The Japanese champion later explained to the press that she was trying to stay calm and therefore, lacked momentum.

Nevertheless, Asada salvaged points with her level-four spins and footwork, and scored 117.32 (52.78/64.54) points for a second place finish in the free skate. With 185.27 points overall, she managed to hang on to first place.

“Based on the result, I can go to the Grand Prix Final,” the 22-year-old observed. “That is good, but today in my program I didn’t do many things that I had worked on, and I am disappointed about that.”

“At the Grand Prix Final, I would like to make sure not to repeat the same mistakes,” the student from Nagoya summed up. “There is not so much time, but I will prepare.”

Suzuki, who stood in fifth place after the short program, fought for her spot in the Grand Prix Final. The World bronze medalist really gave her best in the beautiful and originally choreographed program to O from Cirque du Soleil. The program featured a double Axel-triple toe, as well as five more triple jumps and three level-four spins. The only mistakes were an underrotated triple loop and an edge call on both Lutzes.

The Japanese silver medalist placed first in the long with a new season’s best with 126.62 (64.51/62.11) points, and moved up to second overall with 185.22 points to win the silver. As a result, she has qualified for the fourth spot in the Grand Prix Final.

“I was able to put out everything I am capable of in the free skating today,” said the 27-year-old. “However, the short program was felt in the result. Having gone through two Grand Prix events, there was a certain pattern to be observed. I do a disappointing short program and make up for it in the long program. This is not a good trend.”

Nagasu started well into her program to Saint-Saëns’ Symphony No. 3 in C minor with a triple Lutz, double Axel-triple toe, and a triple flip. She landed another triple flip, but underrotated both triple loops. However, her layback spin at the end was a real highlight. The former U.S. champion earned 115.50 (56.36/59.14) points, and slipped from second to third overall with 176.68 points.

“I was happy to take part in this competition,” said the 22-year-old. “Compared to the Cup of China, I felt I skated better and I also got a better score. Now I have to go home and work hard for U.S. Nationals.”

Nagasu is currently the second substitute for the Grand Prix Final.

China’s Zijun Li completed a triple flip-triple toe and four more triple jumps in her program to Sleeping Beauty, however, it was not enough to stay on the podium. The 15-year-old dropped one spot to fourth overall with 174.11 points.

USA’s Agnes Zawadzki made up some ground with a good triple toe-triple toe combo and a triple Lutz, but she fell on an underrotated triple Lutz and doubled the flip to finish fifth (160.37 points).

Elene Gedevanishvili of Georgia placed sixth with 156.96 points. Her balletic routine to music from Don Quixote included a triple Lutz-double toe and two more clean triples, as well as nice spins, but she popped the second Lutz and went down on a double Axel.