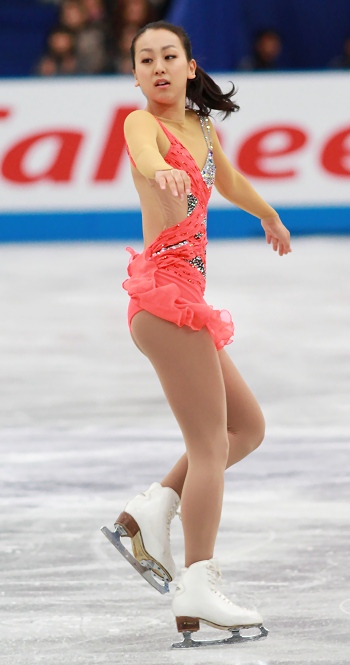 Japan’s Mao Asada performs to “I Got Rhythm” variations by George Gershwin at 2012 NHK Trophy.

Asada gave an upbeat performance to I Got Rhythm by George Gershwin, showing more solid jumps than at Cup of China three weeks ago. The Olympic silver medalist landed a high double Axel, a triple flip-double loop, and a triple loop, and earned a level four for her three spins and the straight line step sequence. As a result, she improved her season’s best significantly with 67.95 (35.70/32.25) points.

“I am very happy with my short program,” said the 22-year-old. “Similar to my performance in China, it went very well. I think it will pave the way for another good performance tomorrow, but I want to go into the free skating with a new feeling. I think there is nothing today that didn’t go well. All the elements were very well executed.”

“I can include higher scoring elements in the future,” the two-time World champion added. “This short program is the foundation, and I can aim higher.”

Nagasu saved her triple toe-triple toe in spite of a shaky landing on the second jump, and followed up with a triple loop, double Axel and strong spins in her jazzy program to Downhill Special by Benny Goodman. The 19-year-old collected 61.18 (32.36/28.82) points.

“I am very proud of myself for landing my triple toe-triple toe today,” said the Californian. “It’s the first time that I’ve landed a triple-triple since I was 14. To 19 it is a big gap, and so it is a big accomplishment for me today. This year, I’ve been improving competition by competition, and so I’d like to take this as a stepping stone for my next competition.”

Nagasu was a late addition to the event and grateful that she could come.

“At the beginning of the season, I was shocked that I got only one Grand Prix, but the rules are very strict,” the Japanese-American said. “After China, where I got fourth, I was really motivated and started training right away. So when I got the phone call, I was happy to be able to step in.”

“I am very happy that I was able to skate a clean short program with all my jumps and that I landed the triple-triple combination,” said the Chinese champion. “Hopefully, I’ll be able to skate my best again in the free skating tomorrow. This is only my second senior-level competition, and I didn’t really expect this result. I still can improve. For example, my footwork was a level two.”

Ksenia Makarova of Russia also skated well with a triple toe-triple toe, but underrotated the loop to finish fourth at 58.93 points.

Japan’s Akiko Suzuki opened with a strong triple toe-triple toe in her dynamic program to Kill Bill and Once Upon a Time in Mexico, but then singled her Lutz. The other elements were strong, and she is not far behind in fifth with 58.60 points.

Elene Gedevanishvili of Georgia put her hand down on the triple Lutz, but still added a double toe for a combination. She also nailed the triple Salchow and double Axel, however, the layback spin only garnered a level two. The two-time European bronze medalist sits in sixth with 57.50 points.

USA’s Agnes Zawadzki is ranked seventh at 55.02 points, and her chances for the Final are now looking slim. The 18-year-old stepped out of her first triple toe and couldn’t add the second one for her combination.

Sofia Biryukova of Russia and Haruka Imai of Japan made some errors to finish eighth and ninth, respectively.