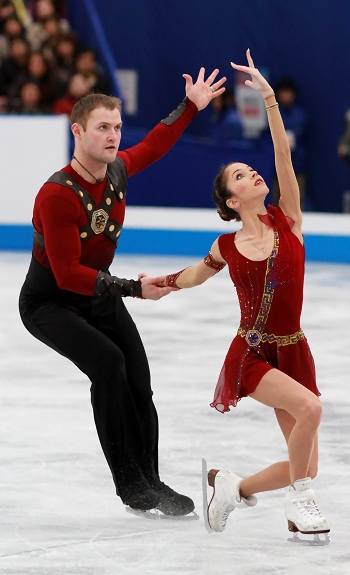 Russia’s Vera Bazarova and Yuri Larionov claimed their first Grand Prix title as the 2012 NHK Trophy wrapped up Sunday in Miyagi and Sendai, Japan. Kirsten Moore-Towers and Dylan Moscovitch of Canada earned the silver, while the bronze medal went to USA’s Marissa Castelli and Simon Shnapir.

Bazarova and Larionov gave a solid performance in their program to Spartacus. Their side by side triple toes were not in unison, and Bazarova wobbled on the double Axel-double Axel sequence, underrotating the second jump, but it was pretty much smooth sailing after these first two elements. The Russian champions produced a high level-four triple twist, a throw triple flip and throw triple loop, as well as level-four lifts with different variations.

“This is the first time for us to win a senior Grand Prix event in our career, and it is very exciting for us,” commented Bazarova. “There are a lot of emotions right now. Obviously, there were some minor errors on the jumps today, so this is something we’ll work on. It was not easy for us to skate, because of the early schedule and we also had to skate last and the legs felt a bit stiff.”

“We want to thank the audience for their support,” added Larionov. “Especially when they started clapping in the third part where we started to feel a bit tired. They gave us extra energy.”

“We’re obviously very happy to win a medal,” said Moscovitch. “It is our first NHK Trophy. The skate wasn’t ideal for us. We could have skated a stronger performance, but we are happy with the outcome. We are excited to go to the Grand Prix Final in Russia.”

“Ice is slippery,” Moore-Towers answered when asked what led to the mistakes today. “I don’t think either of us felt too much pressure about making the Final or the numbers. I think we were prepared to skate a clean program, and I expected that from the way we’ve been training. Stuff happens.”

Castelli and Shnapir completed a triple toe, triple twist, and level-four spins and lifts in their Tango program, but Castelli fell on a double Axel and touched down with her hand on both throws. The Americans earned 112.66 (55.33/58.33) points and remained in third place at 174.51 points.

“Marissa and I are very happy with our placement,” Shnapir told the press. “It is our first Grand Prix medal. The way we skated was not the best. We made a few errors, but all in all we are happy with ourselves. We felt good at the end of the program and definitely felt the energy from the audience.”

“Simon and I have been working really hard this year,” Castelli offered. “We’re hoping that this medal will give us confidence and push us to the best we can be at U.S. Nationals.”

Bazarova and Larionov and Moore-Towers and Moscovitch qualified for the Grand Prix Final.

USA’s Alexa Scimeca and Chris Knierim skated to music from the Last of the Mohicans and 500 Nations soundtracks in their Grand Prix debut. The new team from Colorado Springs produced a triple twist, throw triple flip and loop, as well as side by side triple Salchows and four level-four elements. They moved up from fifth to fourth with a total of 163.10 points.

Anastasia Martiusheva and Alexei Rogonov of Russia, on the other hand, dropped one spot to fifth with 162.25 points. Martiusheva stepped out of the triple Salchow and touched down on the two throw jumps in their routine to The Mission, however, they showed strong lifts and spins, as well as a double Axel-double Axel sequence.