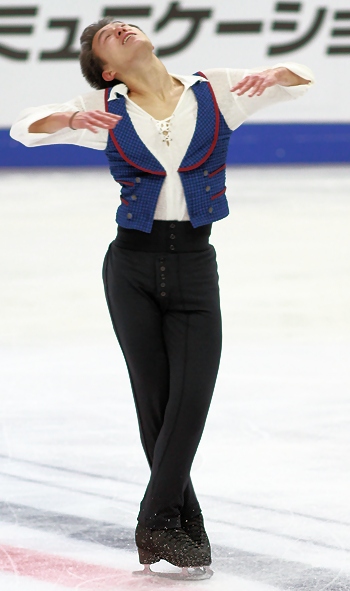 Canada’s Patrick Chan won his first figure skating gold medal of the season after finishing first at the 2012 Cup of Russia. Japan’s Takahiko Kozuka won silver, while Michal Brezina of the Czech Republic moved up from sixth place to capture the bronze.

Chan, who skated last, only made a couple of small mistakes in his program to La Boheme by Giacomo Puccini. He doubled a planned triple Axel, triple loop, and the back end of his triple flip-half loop-double Salchow sequence.

However, Chann’s other elements, especially his opening quad toe-triple toe and a solo quad toe, were superb. Both jumping passes received “+2” and “+3” Grades of Execution (GOE) from the panel, and he earned 29.55 points (more than one third of his total elements score) in the first forty seconds of his program.

Which, according to the skater, was exactly what he was aiming to do.

“At Skate Canada, I had some problems with my quad,” explained the two-time and current World champion. “I tripled it in the short program and then landed only a quad-double in the long, and failed to land the second one clean.”

“So when I got back home, I started to skate the opening section of my program over and over again to make certain that I would have no chance to make a mistake during it,” he continued.

“I think the quad-triple combination was very smooth, and the timing was great,” added the 21-year-old. “The solo quad was not so strong. I was slow coming into it, so I had to use more strength to compensate. “I am very happy to know that I can trust my body to do the job, even if the set up is not perfect.”

The student of Kathy Johnson was equally strong in the presentation and interpretation of his routine, picking up the highest program components score (PCS) of the night, in addition to the highest technical element score (TES).

Two judges were so impressed by his skating that they awarded him a perfect 10.0 for skating skills, a rare occurrence in single skating.

The five-time and reigning Canadian champ, who had to settle for silver at 2012 Skate Canada International a few weeks ago, said that it was a huge motivation for him.

“On one hand, I was very happy to finish second at the Skate Canada,” said Chan. “I was happy to be on the podium, I was happy that I was not yet out of the Grand Prix Final. But at the same time, it upset me a lot and I got this sparkle in me. It really sucks to lose, and it really sucks to see someone else win; especially if you have a program which you know has all the potential to be the best one in the world.”

For the upcoming Grand Prix Final the skater from Ontario promises a surprise.

“I am very lucky that Christopher Dean lives in Colorado when he is not in the UK,” he said. “Sometimes I have a chance to see him skate and work on programs for his show in England. So I asked him if he would be interested in working with me. I am honored that he has agreed.”

“We worked together for one whole week before the Japan Open, and he choreographed a new exhibition piece for me,” revealed Chan. “It is set to a British song called “I Need a Dollar”. I have not shown it to anyone yet, but maybe I will skate it in Sochi. It’s a challenging piece. I have a hat as a prop and I cannot drop it. If I drop it, the program is more or less over. I love it, and I want to do it over and over. Christopher is a genius. He is the best in the world for this.”

Kozuka made mistakes on both of his quad attempts (they were marked as underrotated and he was not able to hold onto their landings), but he executed most of his other jumps well. His choice of music to Introduction et Rondo Capriccioso highlights his strong basics skating skills, however, he is yet unable to produce the same level of commitment and expression as Chan.

“I received a very low score today,” the 2012 Skate America champion acknowledged at the press conference, “much lower than the one I got at Skate America. Both my quads were underrotated and ended in a fall. Now I want to fix it in time for the Grand Prix Final. I need to fix it, but I do not yet know how. I will go home now and think hard about it.”

“I do not know why I can only get to the Grand Prix Final every other year,” added the puzzled 23-year-old. “This time, maybe I was thinking about the Final too much, and as a result, I was very nervous and it affected my performance. In practice, everything was good.”

The 2011 World silver medalist believes that the key to success is practice.

“At home, I repeat all the elements, then I repeat them again,” explained Kozuka. “We try to see what is not working and correct it, and then I repeat again and again. This is the only way to make it perfect.”

Brezina, who was sixth after the short, placed third in the long and catapulted to the podium to edge out Russia’s Konstantin Menshov for bronze. The skater, who arrived to the press conference sporting a Superman T-shirt, admits to being a geek, and claimed that “after pulling from sixth to third, I do feel a bit like superhero.”

His program to The Untouchables soundtrack was less than auspicious at the beginning, however. The 21-year-old crashed on a quad Salchow attempt, and later doubled his second take on the same jump. All his other jumping passes were clean, however, including two spectacular triple Axels. Despite his lack of success with the quad, the student of Viktor Petrenko insists that it has to stay in the program.

“So far my commitment to doing a quad has not really paid off,” admitted Brezina, who trains in Hackensack, N.J, “but I still have decided to give it a go. Quads are fine in practices, but I have only done it maybe three times in competition. I need to develop a feeling of doing a quad in the performance.”

“It is still a relatively new element for me,” he continued. “I need to take my mind off the fact that it’s a quad and approach it the same way I approach triple Axels. I have been doing triple Axels in both the short and the long programs for the last six years, and I have missed it only once, I think. I have to do the same for the quad, hopefully for next year, but in order to achieve it, I need to try it at every competition.”

“My short program yesterday was not the best, even though it was better than at Skate America,” said the 2011-12 Grand Prix Finalist at the press conference. “Missing a quad Salchow here was a big mistake, so I was pretty disappointed with my long program in the beginning, but I have to say that the rest of my program was better than I expected. I am pretty happy with the result. I did not skate my best, but I still won a medal. Now I can only be mad at myself for not skating better, because I could have finished even higher.”

Menshov delivered quite a courageous performance by his standards. The former Russian champion has a tendency to double his planned triples in the second half of the program, but in Moscow, he was totally committed to sticking to his jumping schedule. The only double jump in his program was a double toe at the very end. Unfortunately, the 29-year-old turned his second quad attempt into a triple, and had a couple of tight landings.

Those mistakes were very costly, however, and the skater from St. Petersburg missed the podium by less than a point (223.72).

Japan’s Nobunari Oda, who was eighth after the short program, skated a fast-pasted and powerful program to music from The Sorcerer’s Apprentice soundtrack, but missed his opening quad. Still, the quality of his other jumps, including two triple Axels, allowed him to pick up the second highest TES of the night. He finished second in the long with 154.74 (81.76/73.98) points.

Oda was also the only other skater besides Chan to get more than 80 points for the TES. However, with a only a total score of 217.92, the 25-year-old was only able to move up to fifth place overall.

USA’s Johnny Weir withdrew from the long program with an injury. He later tweeted, “Thank you to my amazing fans. I love you so much and am heartbroken that this has all happened. I wish I could be better for you, and only you.”