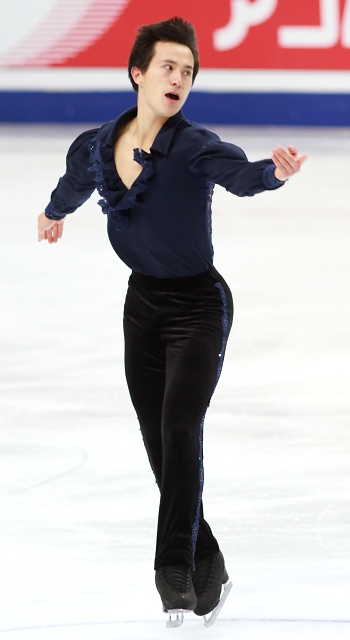 Patrick Chan of Canada performs to “Elegie in E-Flat Minor” by Sergei Rachmaninov at 2012 Cup of Russia.

Canada’s Patrick Chan took a nine-point lead over Konstantin Menshov of Russia to finish first in the short program at the 2012 Cup of Russia. Menshov is virtually tied with Japan’s Takahiko Kozuka, who is currently third.

Chan, who was last to skate, delivered a mesmerizing performance to Elegie in E-Flat Minor by Sergei Rachmaninov. Halfway through his performance, uninterrupted by any visible mistake, the audience was so spellbound that one could almost literally hear a pin drop, and this silence prevailed for a few seconds after he reached his final pose before the audience erupted in an ovation.

The the World champion, however, was not entirely clean. After a shaky landing on his opening quad toe loop, he was only able to tackle a single toe loop at the end of it, which resulted in automatic “-3” grades of execution (GOE). The rules require at least a quad-double combination in the Men’s Short Program.

“I felt a bit shaky today,” admitted Chan. “I was so nervous, anxious, and excited going into this quad, that I was surprised that I landed it, even if the landing was off-balance. I was only able to add a single toe, but it was only when I saw the marks that I realized that it is not allowed and that I got a “-3″ for it. Well, you learn something new at each event.”

However, most of his other elements were superb, and even without full credit for the most valuable element in the routine, five-time and current Canadian champion still got the second highest technical score (TES) to finish first with 85.44 (41.62/43.83) points.

“I am very happy with the rest of the program,” said the 21-year-old. “I did a great triple Axel, great footwork, and I am always glad to compete here. It’s a lucky venue for me. The ice is great and the audience is fantastic.”

The Canadian, whose program is choreographed by Jeffrey Buttle, said that the pre-Olympic season is a perfect time for experiments.

“I worked with Lori Nichol for five years,” Chan explained. “I think I have experienced everything she was able to give me. She did great programs for me and I achieved a lot of success with them. However, to go to the Olympic Games, to become an Olympic champion, one has to be absolutely comfortable and certain that he does not leave any stone unturned. I need to know what is really the best for me.”

“I have chosen David Wilson to choreograph my long program, because I worked with him in shows before and we had great energy,” he continued. “It is very important to have great rapport with your choreographer.”

“As for Jeff, I have always admired him,” said Chan. “Even when I was competing against him, when I won the Canadians and he won the Worlds, I admired him. Musically, he is much better than me. Much better than everyone else, in fact, even Olympic champions. He is able to hear every note in the music and to interpret it. He has great taste too, so I enjoyed working with him a lot.”

His training since Skate Canada mostly consisted of doing run-throughs under duress.

“I did not feel confident enough at Skate Canada,” Chan confided, “so I went back home and did run-throughs every day. I usually do it anyway, but this time I approached it with a different mentality. I tried to pretend that I was in competition. I needed to learn how to handle being nervous, uncomfortable, or tired, and still do those quads and triple Axels, because you really need those jumps.”

“It gave me new confidence,” the skater from Ontario summed up. “I was very eager to improve, because I think I really need to qualify for the Grand Prix Final in Sochi. I believe next year those who skate there this time will have a huge advantage.”

Menshov, who skated in the first warm up group, delivered his career-best short program in which he landed all his jumping passes, including a quad toe-triple toe, and an elusive triple Lutz.

“I am very happy with what I have done today,” said Menshov, who did not expect to finish in the top three and had already left the venue and had to be called back for the press conference. “I am especially happy about the triple Lutz. In the last three events, I landed my quad combination and triple Axel, and then went on to pop a Lutz into a double. Now I was finally able to do it properly.”

“There were some things that I could have done better,” admitted the 29-year-old. “The step sequence, for example, was not good enough. I was so tired during it, that the only thought in my head was ‘it’s gonna be very difficult to skate tomorrow.'”

Kozuka, the winner of 2012 Skate America,was a bit shaky in his powerful routine to Concert Overture  from Exodus by Karol Szymanowski. The Japanese two-footed the landing of his underrotated quad toe, and then fell out of a triple Axel landing. His great flow and sophisticated choreography earned him the second highest program component scores (PCS), however, he ended up in third place with 76.34 (37.99/38.35) points.

“I made some small mistakes today,” admitted the Japanese silver medalist. “This is why I got the score I got. I will fix them tomorrow. I will skate a perfect long program. I know that I have to change to do it.”

The student of Nobuo Sato also collaborated with David Wilson this season.

“This short program music was chosen by David Wilson,” acknowledged the 23-year-old. “Last year I was not so successful, so he has chosen this powerful music to give me more power and energy. I think it works, even if it is a new challenge for me.”

Zhan Bush of Russia also skated a clean program in which he landed a quad toe-double toe, but his level of presentation was not up to the level of the skaters who finished above him. The 19-year-old Russian Junior champion received 74.50 (41.32/33.26) points.

Teammate Artur Gachinski was fifth after a soulful performance to music from The Highlander soundtrack, another creation by Wilson. The Russian silver medalist fell on quad toe and only landed a triple Lutz-double toe to earn 74.07 (38.21/36.86) points.

The only other skater to score above the 70-point benchmark was Michal Brezina of the Czech Republic, who popped his planned quad Salchow into a double (73.83).