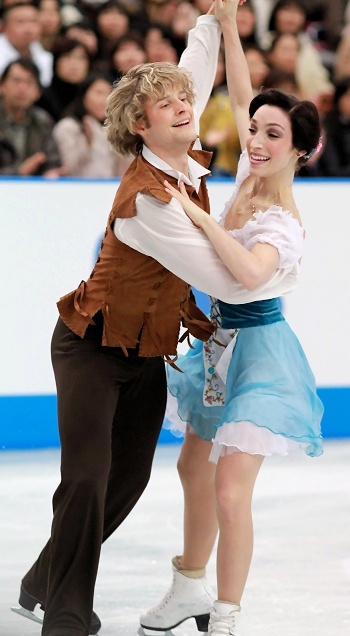 Davis and White went for the classical March, Waltz, and Polka with their program to music from the ballet Giselle by Adolphe Adam. The routine, which is incorporated with ballet moves, is very well done. The costumes were typical and the audience really enjoyed this performance.

“We went out on the ice talking about how we really like to use this program to make the audience feel good, and it makes us feel good,” said White. “It’s a really enjoyable program to skate. The music and choreography go so well together and it’s a lot of fun. We wanted to show that and experience it ourselves. I think we really accomplished that today.”

However, the reigning World silver medalists left some points on the table with their levels. While the team garnered a level four on the twizzles and rotational lift, and a level three for the first Polka sequence and circular steps, the second Polka pattern was only a level two. The lift was also extended, which resulted in a deduction as well, and the Americans scored 69.86 (33.50/37.36) points.

“Technically, not as strong as we like,” admitted White. “Obviously, we always want to get perfect levels across the board, so we’re going to get home and work on that.”

Although the US champions have been working on the dance since Skate America, it was not reflected in the score. However, they did not appear too frustrated by this.

Maia and Alex Shibutani showed improvement since the Rostelecom Cup in their short dance. Their program to South American music by Incantations (which was made famous in the late 80s and in 1990 by Isabelle and Paul Duchesnay in their “Missing” programs) looked smoother than two weeks ago, however, the levels still are not what they could be.

Like Davis and White, the brother-and-sister team collected a level four for the twizzles and rotational lift, a level three and two for the Polka, but their midline steps only garnered a level two. Still, 60.84 (29.36/31.48) points were a new season’s best for the 2011 World bronze medalists.

“We are happy with our performance at this point of the season,” said Maia Shibutani. “It felt really great out there. The crowd was so supportive. Considering that we had only one week since Cup of Russia, we’ve made a lot of great changes and improvements. We feel like the performance was a lot better.”

The team had come straight from Moscow to Japan and trained with Oleg Epstein in Nagoya to prepare for NHK Trophy. Alex Shibutani said that he has recovered from his muscle spasm that caused him to stop during the the free dance at Rostelecom Cup.

“We were able to take a couple of days off in addition to our travel day when we got to Japan to get some massage done,” he shared. “I’m feeling much stronger and ready for this competition.”

Ilinykh and Katsalapov performed their Uzbek “Andijan” Polka with obvious joy, and maintained good speed throughout. However, Katsalapov was shaky on the second part of the twizzles, which earned a level three, and the team also lost points with a level one for the second Polka pattern. The side by side circular footwork had a lot of flow and was graded a level three. The rotational lift was the only level-four element.

“We did a lot of work since Rostelecom Cup,” offered Ilinykh. “Nikolai wasn’t there, so we worked with Elena Kustarova. We worked on skating with more passion and how to look at each other at each point into the program.”

The Russian silver medalists were also slapped with two deductions: one for an extended lift and the other one for a timing violation. Katsalapov slid into his ending pose and didn’t come to a full stop right away. They collected 59.96 (28.43/33.53) points, well below their season’s best.

“We skated well today. I did a mistakes on the twizzles, but it doesn’t matter,” Katsalapov commented. “We had fun and we smiled during the whole program.”

“We skated better than at Rostelecom Cup,” added Ilinykh, “but Nikita did a couple of mistakes. We need to work more on the Polka. It is hard to hit the key points and this is a new dance for us. I hope if the Polka will be okay, we get more points.”

Nicole Orford and Thomas Williams of Canada came in fourth with 49.76 points. They turned in an upbeat Western Polka and Waltz, earning a level four for the twizzles, rotational lift, and first Polka pattern. The second Polka part was only a level one, however.

The Canadians had to go back to an old pairs of skates. When departing Moscow, they tried to take their skates into their hand luggage, but were not allowed to take them on board. They also were not allowed to go back to check in another bag with their skates, and as a result, had to leave the skates in Moscow at the airport. The Russian Figure Skating Federation sent the skating boots to Canada, but they only arrived this Wednesday.

Japan’s Cathy Reed and Chris Reed turned in a solid Waltz and Polka to finish fifth at 48.33 points.

Penny Coomes and Nicholas Buckland from Great Britain are ranked sixth with 46.72 points. They nearly bumped into each other on the twizzles, and two of their elements only merited a level one.