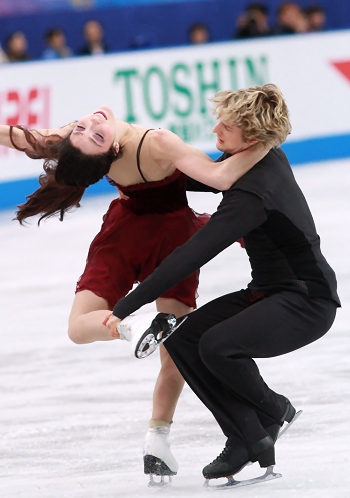 USA’s Meryl Davis and Charlie White easily dominated at 2012 NHK Trophy Saturday, winning with nearly 22 points to spare. Elena Ilinykh and Nikita Katsalapov of Russia overcame a sudden illness to take silver and qualify for their first Grand Prix Final, while USA’s Maia Shibutani and Alex Shibutani slipped to third for the bronze.

Davis and White looked confident and strong, just as they had in the short dance yesterday. Skating to the well-known music of Notre Dame de Paris, the dancers were able to assume their roles of “Esméralda” and “Quasimodo,” and showed more emotional connection than they had in the past. Technically, there is not much that needs to be improved.

The 2012 World silver medalists were awarded a level four for the spin, lifts, and twizzles. The diagonal step sequence was awarded a level three, however, the circular steps were a rather low level two. Again, there were lots of positive Grade of Execution (GOE) scores, and quite a few perfect 10.00s for components.

“Charlie and I were very pleased with our performance today,” said Davis. “It was our second competition of the year, and we felt it was like a huge step up from the first competition.”

Being so superior does not take away the challenge of competing at the Grand Prix.

“We like to use every competition that we are in to build our programs and our confidence,” White pointed out. “We try to reach certain goals for ourselves and that’s the case whether we are 22 points ahead or .2 points ahead. We really feel we’re out there kind of competing against ourselves, kind of being the best that we can be. We really like to focus on ourselves. That really has been the key to our success for all these years.”

Davis and White are qualified with the maximum of 30 points for the Final.

Ilinykh and Katsalapov danced to music from Ghost, telling the story of a young couple in love who are torn apart when the man is murdered and comes back as a ghost to protect his girlfriend. In a sense, Katsalapov really had to protect his partner today as she was suddenly taken ill before the performance and wasn’t sure if she could skate.

“Today was a tough day,” said Katsalapov. “Lena suffered from a kind of (food) poisoning. I found out about it just shortly before we skated. It was a shock for the whole team, and everybody tried to help her, and me, too.”

“I didn’t really understand at first if we had to fight to the very end, or if we should not skate at all today,” he added. “We want to show our best and not just skate through the program.”

Ilinykh spent most of the five-minute warm up at the boards looking deathly pale, however, when it was their turn to compete, the Russians delivered a technically strong and clean performance. The twizzles, lifts, and footwork had flow, however, the team appeared to lose steam towards the end. The 2012 European bronze medalists earned the same levels as Davis and White, and posted a new season’s best of 96.66 (46.73/50.93) points to overtake the Shibutanis with 156.62 points.

“We made a decision that we wanted to go for it, and I think it worked,” said Katsalapov. “I tried very hard.”

Shibutani and Shibutani’s Japanese-themed program to Memoirs of a Geisha was very well-received. In Moscow, the siblings had to interrupt their program as Alex suffered a muscle spasm and the whole program was affected by his injury. This time, it went much smoother. The U.S. silver medalists collected a level four for five elements – the twizzles, the spin, and three lifts, and scored a season’s best again with 93.72 points. Overall, they received 154.56 points.

“We feel like we’ve made so many improvements since Russia,” Maia Shibutani offered. “We know what we have to do when we get back home, but for today, skating in front of such an amazing audience was such an honor for us. We really enjoyed ourselves.”

“Maia and I put in a lot of hard work last week in preparation for this competition, and we really feel like it went well,” added Alex Shibutani. “We pride ourselves on our ability to really buckle down and focus on the details. Heading into our national championships, this is the main focus.”

Nicole Orford and Thomas Williams of Canada put out a solid dance to a Jazz medley to come in fourth with 130.10 points. They earned a level four for all elements, however, both step sequences were only graded a level two.

Japan’s Cathy Reed and Chris Reed danced to a Beatles medley in which she wore a colorful costume reminiscent of the 70s. Three lifts and the spin garnered a level four, however, the diagonal footwork was only rated a level one. The brother-and-sister team finished fifth at 124.46 points.

Penny Coomes and Nicholas Buckland of Great Britain had a small issue with the twizzles again, and received low levels for their circular steps and rotational lift. They placed sixth with 122.80 points.