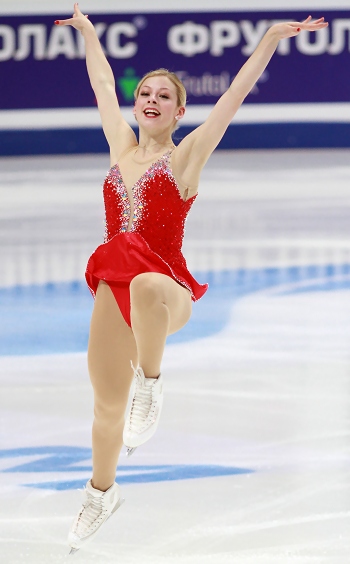 USA’s Gracie Gold earned a new personal best with her short program performance to “Hernando’s Hideaway” at 2012 Cup of Russia.

The 2012 Cup of Russia, the fourth event in the 2012-13 ISU Grand Prix Series of Figure Skating began today in Moscow with a spectacular performance by USA’s Gracie Gold in the Ladies Short Program. The 17-year-old finished first with a new personal best, followed by Finland’s Kiira Korpi. USA’s Agnes Zawadzki was a close third.

Gold recovered from her weak outing at Skate Canada International two weeks ago and nailed all jumping passes in her ambitious program to Hernando’s Hideaway, which features a triple flip-triple toe loop and a triple Lutz out of steps.

Gold was the only one in the field to attempt this jump combination. According to the skater, experience made all the difference between her performances in Canada and in Moscow.

“Skate Canada was my first ever ISU Grand Prix event and only the third international tournament of my career,” explained the student of Alexander Ouriashev and Oleg Epstein. “I was very nervous. I put a lot of pressure on myself. Today, I told myself to take a breath and skate like I do in practices. It worked.”

“I am very happy with my performance,” she continued. “Of course, there were a couple of things which still could be improved, but otherwise it was good. I am proud of the way I skated today. I like the score and I hope that I will be able to skate with the same energy tomorrow. I loved the support I got from the crowd today.”

As a newcomer to the competitive scene, Gold skated first due to her low ISU World Rankings, however, she did not allow it to affect her performance.

“I am a bit surprised that I finished first, but I knew that I skated really well,” said the American. “Of course I dreamed about finishing first, all of us do. Now I am very happy and I hope that I will be able to skate well tomorrow.”

Korpi delivered a clean and enchanting performance to The Girl With Flaxen Hair by Claude Debussy, but she turned her planned triple toe-triple toe into a triple-double. She received the highest program component score (PCS) of the night for her exquisite attention to detail, however, her technical score put her in second place with 61.55 (31.51/30.04) points.

“My performance today was not 100 percent,” the 24-year-old admitted. “Obviously I am a bit disappointed about the jump combination, but otherwise it was a good, solid performance and a great place to continue tomorrow.”

The Finnish champion, who now have a chance to advance to the ISU Grand Prix Final, does not find the pressure daunting.

“I am in a rather challenging situation,” Korpi explained. “I have just finished competing at the Cup of China, and now I have to put all the tiredness and jet lag behind and focus on skating strong tomorrow. The thought about a chance to compete in Sochi is a huge motivation for me, and I will try to take advantage of it. I will certainly fight for it tomorrow.”

The 2012 European silver medalist, who has competed in Moscow on a number of occasions, said that she likes the venue very much.

“I love competing here, and I enjoy coming to Moscow a lot,” offered Korpi. “The only thing is the last time I was here, it was in May and the weather was far more pleasant, but the arena is always bright and the public is very supportive.”

Zawadzki also improved her personal record with 60.18 (33.01/27.17) points for a clean and inspired performance to music from the Sex and the City soundtrack. The student of Christy Krall nailed a triple Lutz out of steps, but with an easier combination jump than Gold (a triple toe-triple toe) and only one level four element (layback spin), she had to settle for the third place.

“I am very happy with my performance,” said the US bronze medalist. “Of course I could have done some things better, for example the footwork, but overall it was good. The arena is very welcoming and bright and I love the public here.”

The skater from Colorado Springs, Col., who is in a good position to win a medal and has a chance to advance to the ISU Grand Prix Final, claims that she does not think about it.

“My focus for the long program tomorrow will be to skate like in practice, to take my time,” the 18-year-old explained. “I need to focus more on presentation and music, and if I manage to do it, I will be proud of myself. We will see about the Grand Prix Final.”

The home ISU Grand Prix event was not a lucky one for the hosts. The best of three Russian competitors, World silver medalist Alena Leonova, is currently fourth with 58.85 points. Skating last, the student of Nikolai Morozov seemed to be well on her way to taking the lead as she nailed a triple toe-triple toe and a triple flip out of steps, but then she popped the double Axel into a waltz jump.

“Well, I am not that far behind the leaders,” said the ever-cheerful competitor. “It was a silly mistake to make, but I will try to do my very best tomorrow, and this time I will remember to focus on the Axel.”

She is followed by Adelina Sotnikova, who made the same mistake as she did at Skate America, popping her flip into a single. Otherwise, the Russian champion was strong and earned 57.11 points.