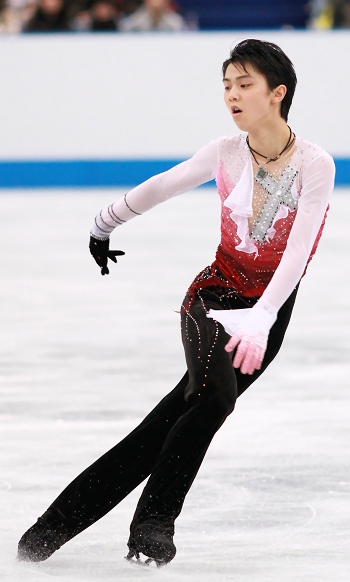 Yuzuru Hanyu celebrated victory on his home ice in Miyagi/Sendai, leading the Japanese men to a one-two finish Saturday at the 2012 NHK Trophy. The silver went to teammate Daisuke Takahashi, while USA’s Ross Miner moved up with a strong free skate to take the bronze.

Hanyu hit a nice quad toe right out of the gate in his routine to Notre Dame de Paris program. The 17-year-old then went for the quad Salchow, but stepped out of it. He came back strong with a triple flip, a level four flying combination spin, smooth level-three footwork, and a triple Axel-triple toe. He also landed the next triple Axel, but only added a single toe to it. While his following jumps were solid, he crashed on the second Lutz.

The Japanese bronze medalist seemed to tire during his combination spin and lost his balance, tumbling to the ice before pulling himself together for the final spin. He was awarded 165.71 (88.93/78.78) points for his effort, and won the gold with a total score of 261.03 points.

“Even with the mistakes, I was able to surpass 160 points,” noted Hanyu. “That has given me confidence. I think that it was [due] to the hard training I have been doing that I was able to win.”

“There is a huge pool of strong Japanese male skaters, and the fact that there are less spots (at Worlds) than skaters, makes me stronger,” he added.

Takahashi landed a nice quad toe, but the second quad toe was not clean and was underrotated. The World silver medalist also stumbled out of his second triple Axel. Overall, he completed six clean triples and three level-four spins, including a rarely seen layback spin in men’s figure skating. He set a new season’s best for himself with 164.04 (80.98/83.06) points, and had 251.51 points overall.

“In the free program I was able to land one quad toe, but for the second one and the Axel, there was a mistake,” the Japanese champion acknowledged. “I really felt bad about that. I felt what I need to work on, what my weaknesses were.”

“In training and joining the actual competition with the younger skaters, I feel that Men’s figure skating is at a very high level now, and it is continuing to go higher,” added the Olympic bronze medalist.

Takahashi qualified for the Grand Prix Final, and will compete alongside Hanyu next month in Sochi, Russia.

“It is my seventh time to be at the Grand Prix Final, and I am happy to make it,” said the 26-year-old. “I think it probably will be my toughest one.”

Miner pulled off a quadruple Salchow and seven triple jumps, including two Axels, in his routine to music from Captain Blood. He also displayed two level-four spins, and earned a season’s best of 161.96 (86.74/75.22) points. The American was able to repeat as a bronze medalist at NHK Trophy with 235.37 points overall.

“I had a short program I was not happy with, because I did a double Salchow,” the U.S. bronze medalist told the press. “This is the first time that I had landed the quad Salchow in my program. I was happy with that, and I was also very pleased with myself that I was able to keep my focus all the way through my program after having done the quad.”

The reigning Four Continents bronze medalist feels that this result gives him confidence and motivation for U.S. Nationals.

“It’s a good confidence booster to really show what I can do in the long program and to land the quad, but I need to go home and work very hard because there are a lot of good American men,” the 21-year-old commented.

Javier Fernández of Spain didn’t have his best day. The 21-year-old stumbled on his first quad toe, doubled the Axel, and fell on the second quad toe (before falling again just after getting up). While he landed a beautiful quad Salchow and three other triple jumps, the messed up the triple Lutz and a triple Salchow. In the end, there were just too many mistakes and the Spaniard, who placed fifth with 146.55, dropped from third to fourth overall at 232.78 points.

Nevertheless, Fernández qualified for the last spot in the Grand Prix Final with 24 out of 30 points.

USA’s Richard Dornbush doubled his first planned quad toe and crashed on the second. However, the 21-year-old rallied back to produce seven triples, including a triple Lutz-triple toe combo where he held both arms over his head on both jumps (“Rippon style”). He moved up from sixth to fifth with 217.56 points.

Kevin Reynolds of Canada landed a quad Salchow and quad toe-double toe combination, but underrotated another quad toe, singled the Axel, and fell on the Lutz. He placed sixth with 216.26 points.

Russia’s Sergei Voronov placed seventh overall with 214.88 points. His program was highlighted by a quadruple toe and two triple Axels.

USA’s Adam Rippon made no major mistakes, however, he was the only skater without a quad attempt (210.47 points).