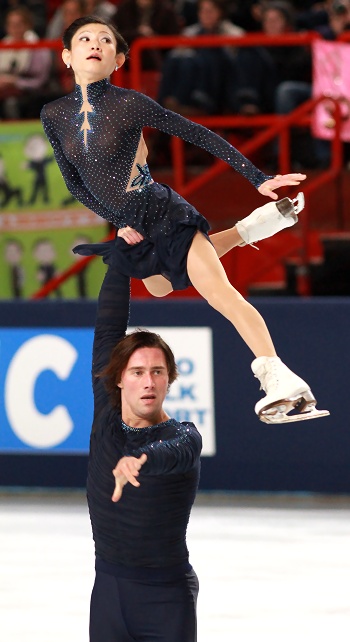 Yuko Kavaguti and Alexander Smirnov of Russia claimed the gold in the Pairs figure skating event at 2012 Trophee Eric Bompard in Paris on Saturday. Canadians Meagan Duhamel and Eric Radford skated to the silver medal, while Italy’s Stefania Berton and Ondrej Hotarek moved up from fourth to grab the bronze.

Kavaguti and Smirnov had to overcome a shaky start into their romantic program to February when Kavaguti underrotated and stumbled on the first jump in their planned triple toe-triple toe sequence (and only did only a double for the second jump). Smirnov stepped out of the second toe. Kavaguti also later underrotated the double Axel.

However, the team’s throw triple Salchow, triple twist and throw triple loop were good, and the Russians earned a level four for the spins and three lifts. The death spiral was a level three and the pair combination spin a level two. With 121.21 (56.81/64.40) points, Kavaguti and Smirnov were ranked second in the Free Skating, but held on to first place with 187.99 overall.

“We are happy with our performance and got the ticket to the Grand Prix Final. That was the most important,” Kavaguti commented.

The team withdrew from the Sunday gala due to Smirnov having knee problems again.

Duhamel and Radford turned in a strong performance to Angels, completing a level-three triple twist, their trademark side by side triple Lutz, a triple Salchow-double toe-double toe in the second half, and a throw triple Lutz. The only error came when Duhamel fell on the throw triple loop, however, the spins, death spiral, and Axel Lasso lift merited a level four.

“Last year we were third and third, this year we are second and second, so we’re hoping next year we’ll be first and first,” Radford added, laughing.

Berton and Hotarek skated to Vincente Amigo’s Flamenco piece Poeta en el Viento, turning in a solid program. They landed a triple toe-double toe-double toe, a triple twist, a throw triple loop and Salchow. The Italians also picked up a level four for two lifts, the death spiral, and the side by side spin. The only glitch came when Berton doubled the Salchow. The team came in fifth with 112.19 (58.14 /54.05) points, but pulled up to third overall with 169.49 points.

“Today it was a surprise for us,” said Hotarek. “Everything was pretty close (for third place). We did the maximum in our free program. We skated well in both programs in this event, and we are happy with third place.”

“We got two third places this year, and last year we had one,” he added. “We’re taking smaller steps than Meagan and Eric, but we’re trying to go on like this. Maybe next year there’ll be one second and one third place.”

Cheng Peng and Hao Zhang of China dropped one spot to fourth at 167.76 points. The new team produced a high quadruple twist, difficult lifts, and a throw triple Salchow, but Peng fell on the throw triple loop and singled the Axel. She also underrotated the last jump in their triple toe-double toe-double toe combo.