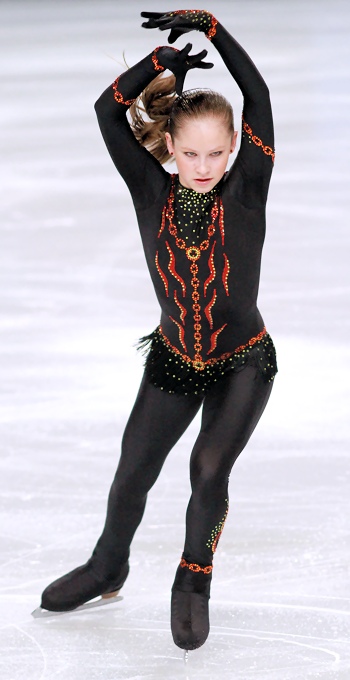 Lipnitskaya is just 14 years old, but is one tough cookie. The day before she left for Paris, she twisted her right ankle during off-ice training and could hardly do any jumps in practice on Thursday.

Tonight, however, she put out a clean short program with the most difficult content of all ten ladies in the event. The World Junior champion nailed a triple Lutz-triple toe combination, a triple flip and double Axel. The crowd also loved her spins.

“I skated very well for myself and I did everything I could,” said Lipnitskaya . “My (ankle) injury didn’t bother me during my performance.”

Wagner turned in a sophisticated and elegant performance to music from the Red Violin soundtrack. She landed a triple flip-double toe, a double Axel, a triple loop, and picked up a level four for the layback spin. The U.S. champion collected 63.09 points (32.52/30.57).

“Going into this event I definitely felt pressure,” admitted the 21-year-old. “I was very nervous before I went out to skate, but I felt that I really improved from Skate America with my short program.”

Wagner was very pleased with the scores she received for the combination jump and triple loop.

“Hopefully, as the season goes on, I’ll add a triple-triple,” the 2012 Four Continents champion told the press.

Tuktamysheva showed a lot of improvement compared to her first Grand Prix at Skate Canada three weeks ago. The 15-year-old had gone back to last year’s Tango program. Although she stumbled on her opening triple toe-triple toe combo, the 2011 Russian Junior champion recovered to land a triple Lutz and double Axel with her hand over the head, and scored 58.26 points (31.29/26.97).

“A month ago I was in bad shape, and I came to Skate Canada just to skate my program clean,” explained Tuktamysheva. “Now, in France, I am fighting for a spot on the podium. I feel like I skated very well today.”

“I am very glad about that because I love the tango,” said the Olympic Youth Champion. “It is truly my theme.”

Maé Bérénice Méité of France delivered a solid performance to Feeling Good that included at triple toe-triple toe, a triple flip, and double Axel. The 18-year-old Frenchwoman showed a lot of improvement in her presentation, and is currently ranked fourth with 54.83 points (29.80/25.03).

Skating to Romeo and Juliet, 16-year-old Polina Korobeynikova of Russia hit a triple toe-triple toe, but underrotated her triple loop to come in fifth with 54.50 points (27.33/27.17).

Elena Glebova’s program to Tales and Legends featured a triple toe-triple toe, but the 23-year-old had an edge call on the triple Lutz and her component score was rather low. She sits in sixth with 52.61 points.

USA’s Christina Gao missed her planned triple toe-triple toe when she stumbled out of the first jump. The 18-year-old saved a few points by adding a double toe to the triple loop for a combination, and finished seventh (52.55 points).