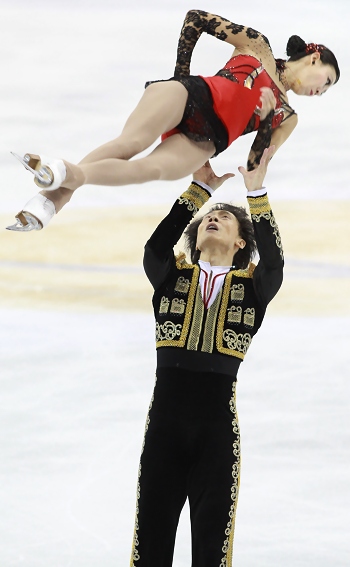 Qing Pang and Jian Tong of China perform to “Scott and Fran’s Paso Doble” at 2012 Cup of China.

Pang, 32, and Tong, 33, improved their performance from Skate America two weeks ago, and looked really sharp in their routine to Scott and Fran’s Paso Doble.

The team landed the side by side triple toe (that Tong had missed at Skate America), a triple twist, and earned a level four for the lift, the dancy step sequence, and side by side spin. Pang slightly two-footed the throw triple loop, however, most judges still gave the 2010 Olympic silver medalists positive grades of execution (GOE).

The Chinese team interprets the Paso Doble, which was choreographed by former U.S. ice dancer Renee Roca, in a very authentic way. The two-time World champions were awarded 68.57 points (35.48/33.09).

“This is our second competition of the season and we did much better than at Skate America, so we are very satisfied,” said Tong.

“We still can do  better than that,” he added. “For us, it is important to compete as we missed the Grand Prix  last season. Our goal is it to perform our best at the World Championships and  Olympic Games.”

Although Kavaguti, 30, and Smirnov, 28, were solid, their short to The Blue Danube wasn’t as crisp. The 2010 European champions opened with a triple twist, followed by a triple toe and throw triple loop. The side by side spin and the lift were a level four, but the backward outside death spiral garnered only the base value. The Russians scored 63.70 (31.93/ 31.77) points.

“We are satisfied with our performance in our first competition,” Kavaguti told the press. “We skated with emotions, and I think the audience danced with us. We really like this music, and it is working much better for us than the music we first had.”

Skating to A Motley Crew by Raphael Beau, Moore-Towers and Moscovitch put out a playful performance that featured a a triple twist, triple toe, and level-four lift and spin, but the throw triple loop was shaky and the step sequence got only a level one. The Canadians collected 59.12 (30.52/28.60) points.

“We are pretty pleased,” said Moore-Towers, 20. “It’s our first Grand Prix and we more or less went clean. We lost a couple of levels which would have put us a little bit higher on the number, but what’s done is done.”

“We are more ready for this one (than for their season opener in Salt Lake City),” 28-year-old Moscovitch added.

He talked about the story behind their program:

“It’s kind of like a game of cat and mouse,” he explained “I’m kind of innocent in a way, and she comes and gets my attention and plays games with me the whole way through. I then try to get her attention. In the end, I think I win her over, but she’s still just playing with me.”

Cheng Peng, 15, and Hao Zhang, 30, of China are a new team, although Zhang obviously is well known. With former partner Dan Zhang, he won silver at the Olympic Games in 2006 and three World silver medals, but Dan Zhang retired at the end of the last season.

“We teamed up in May,” confirmed Zhang. “We are still not at the highest level because my partner is quite young.”

The team should be happy with their solid debut at the international stage. Skating to Live and Let Die, they produced a high triple twist, a throw triple Salchow, a difficult death spiral, side by side spin, and lift — all of which were rated a level four. Peng just wobbled on the side by side triple toe. The duo finished fourth with 57.89 points.

Russians Ksenia Stolbova and Fedor Klimov skated much better than at the Coupe de Nice last week, but left some points on the table. Their routine to music from Interview with the Vampire was highlighted by a level-four lift, as well as a triple toe late into the program. However, the triple twist was messy and the throw triple Salchow, the last element, was shaky. The European bronze medalists lost points on a level two death spiral and level one footwork to place fifth at 56.66 points.

Wenting Wang and Yan Zhang of China impressed with a big triple twist (they are practicing a quad twist), and also landed a double Axel and throw triple loop. The team from Harbin finished sixth with 49.79 points.

There are only six pairs competing as Japan’s Narumi Takahashi and Mervin Tran and USA’s Caitlin Yankowskas and Joshua Reagan withdrew earlier and could not be replaced.