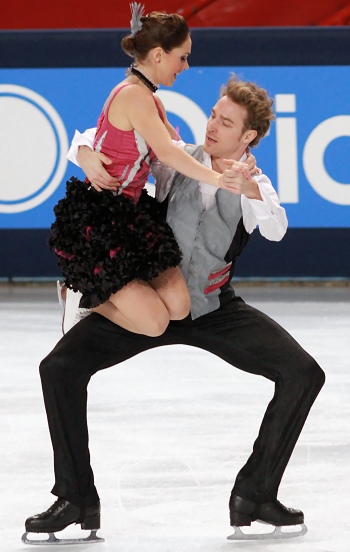 Local favorites Nathalie Pechalat and Fabian Bourzat of France took the lead with a strong short dance Friday evening at 2012 Trophee Eric Bompard in Paris. Italians Anna Cappellini and Luca Lanotte are a little over two points behind in second place, while Ekaterina Riazanova and Ilia Tkachenko of Russia came in third.

Naturally, the French champions’ Polka to the popular French “Can Can” and the well-known Waltz Sous le ciel de Paris was an instant hit with the crowd at Paris Bercy.

“It was a pleasure for us to skate, because the audience was cheering and clapping for us from the beginning and during all the Can Can,” said Bourzat. “I felt that what we did was pretty strong, [like the] twizzles and step sequence. We also managed to get a key point in the Polka that we didn’t have in China, but we also missed another one we got in China.”

Cappellini, 25, and Lanotte, 27, have a very strong short dance as well. Their Polka to the Barn Dance from the Seven Brides for Seven Brothers soundtrack and their Waltz from the same movie blend very well together. The elements were strong: the Italian champions picked up a level four for the twizzles, the first Polka sequence, and the rotational lift, earning a season’s best with 66.18 (33.07/33.11) points.

“We tried to push our limits in practice,” shared Lanotte. “In the weeks between the competitions, we tried to push more and to be stronger and build our confidence. I think tonight we really showed it. The levels were good and we are very happy about it.”

Partner Cappellini agreed that they had improved their performance since Skate Canada.

Riazanova, 21, and Tkachenko, 25, had good flow in their short dance to a Waltz and Polka from My Fair Lady. Their twizzles were rated a level four, however, they only achieved a level two for the two Polka patterns and the side by side circular steps. Despite the low levels, which held the Russian bronze medalists back, they still earned a season’s best with 58.23 (28.08/30.15) points.

“Compared to Skate Canada, it (today’s performance) was a little bit stronger and [we were] not so nervous as Skate Canada was our first competition,” Tkachenko noted. “At this competition, we were stronger and calmer. We’ve worked a lot on the Polka between the competitions, but we still have a lot of work to do.”

He added that he feels the Polka is a very difficult dance for him, and that the team is competing it for the first time.

USA’s Madison Hubbell and Zachary Donohue placed fourth with a smooth Waltz from the Titanic soundtrack and John Ryan’s Polka. However, they lost points as their second Polka sequence only earned a level one (56.54 points).

Canadians Piper Gilles and Paul Poirier interpreted Mary Poppins very well, however, they also only earned a level one for the second part of the Polka (51.99 points).

Ekaterina Pushkash and Jonathan Guerreiro of Russia had a shaky performance with little bobbles on the twizzles and the Polka to place 7th (49.88 points).

Pernelle Carron and Lloyd Jones of France disappointed with low levels in the Polka, as well as the side by side steps in which Lloyd stumbled twice (48.35 points).