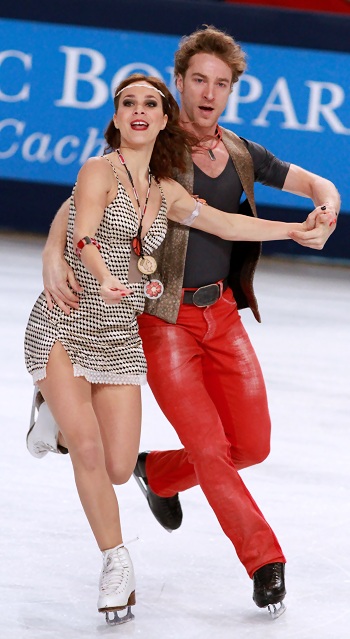 Nathalie Pechalat and Fabian Bourzat of France pocketed their second Grand Prix gold medal this season in a convincing manner with 15 points to spare at 2012 Trophee Eric Bompard. Italy’s Anna Cappellini and Luca Lanotte of Italy earned the silver medal, while Ekaterina Riazanova and Ilia Tkachenko of Russia captured the bronze.

Pechalat and Bourzat entertained the crowd with their “Rolling Stones” medley, which was well-received with the audience clapping along. Once again, the French were strong technically, collecting a level four for the lifts and combination spin, however, they received a one point deduction for an extended lift. Their twizzles and step sequences were awarded a level three.

“We skated a clean program and I think it was stronger than the one we did in Shanghai (at Cup of China),” said Pechalat. “We changed some transitions and it was better. It was better to skate in front of the French audience, because they were clapping and supporting us.”

Cappellini and Lanotte had to overcome a shock right at the beginning of their dramatic “Carmen” routine when Lanotte crashed on the twizzles, their first element.

“At that point of the program I had a choice in front of me,” Lanotte later  explained. “I had a big opportunity to learn something. I could have a strong reaction or basically let my program die. I choose to fight for the program. Even if it was at the beginning of the program, and the fall was very bad, I tried to give the tougher answer to my situation.”

However, the Skate Canada silver medalists didn’t let the mistake affect the rest of their performance. They completed level-four lifts, although one received a one point deduction for being extended, and a level-four spin. The step sequences, which appeared smooth, only merited a level two and the twizzles received no level or points.

The Italian champions earned 87.08 (38.85/50.23) points and were ranked fourth in the free dance, however, maintained second place overall with 153.26 points. It was their second silver this season, and they qualified alongside with Pechalat and Bourzat for the Grand Prix Final of Figure Skating.

“Clearly, not everything went as planned tonight, but I think after the big mistake at the beginning of the program we had a good reaction and everything after that was pretty smooth,” Cappellini commented. “I felt that without the fall it could have been a really good program. It was definitely an experience.”

Riazanova and Tkachenko had a lot of flow in their waltzy “Godfather” dance, and earned a level four for the lifts and a level three for the spin. Their circular and diagonal footwork were graded a level two. The team from Odintsovo were awarded a new season’s best with 87.80 (41.38/46.42) points and accumulated 146.03 points overall.

“Compared to Skate Canada, it was harder to skate tonight,” Tkachenko told the post-event press conference. “Maybe because there was a long break between practice and competition. It is very hard to wait the whole day. All the bad thoughts are coming to your head and it is difficult to manage, but we did well and we are happy with our placement today.”

USA’s Madison Hubbell and Zachary Donohue put out a characteristic Flamenco routine and picked up a level four for five elements. The Americans finished second in the free dance with 88.69 points, but overall remained in fourth place with 145.23 points.

Julia Zlobina and Alexei Sitnikov of Azerbaijan came in fifth at 140.30 points. Their fun dance to fast-paced Croatian folk music was well-liked by the crowd.

Piper Gilles and Paul Poirier of Canada placed sixth. Gilles wobbled on the twizzles, but otherwise their program to Jewish-inspired music was smooth (135.86 points).

Russia’s Ekaterina Pushkash and Jonathan Guerreiro interpreted Tristan and Isolde and gave a solid performance. They were ranked seventh (128.26 points).

Dancing to La Chanson des Vieux Amants by Jacques Brel, Pernelle Carron and Lloyd Jones of France finished eighth with 120.23 points. Their spin received no value and their circular footwork was shaky. Jones was ill with a stomach upset and the team was unable to participate in the gala on Sunday.