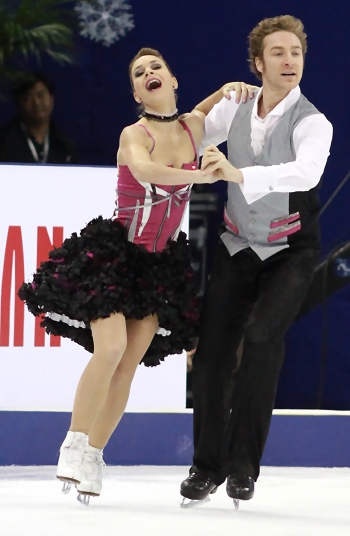 Nathalie Pechalat and Fabian Bourzat of France perform their Short Dance at 2012 Cup of China.

Nathalie Pechalat and Fabian Bourzat of France took a strong lead in the short dance as the 2012 Cup of China figure skating event kicked off Friday in Shanghai. Kaitlyn Weaver and Andrew Poje of Canada and Russia’s Ekaterina Bobrova and Dmitri Soloviev are separated by just 1.27 points in second and third place, respectively.

Pechalat and Bourzat skated last and proved how ready they are this year. The two-time and current European champions looked confident in their Polka and Waltz set to the upbeat French “Can Can” and the romantic waltz Sous le ciel de Paris. They opened with fast twizzles, followed by a smooth side by side circular step sequence and a straight line lift with changes of position, all of which earned a level four.

The team also met five out of six key points in their Yankee/Polka patterns, and the entire program looked polished. The Chinese crowd especially enjoyed the “Can Can” portion in which Pechalat waved her skirt around.. The French champions were awarded with 69.15 points (34.00 and 35.15).

“The first competition is not always as good as in practice, but I think we’ve improved a lot in presenting ourselves in competition,” said Bourzat. “We were in good shape for this first short dance of the season. I hope that the audience enjoyed the theme we showed. Technically, there is still room for improvement.”

“We’ve focused a lot on our training and did only very few shows,” added the 31-year-oldt. “We want to have no regrets. We’ve improved our skating and edge work, and I feel we are as ready now as we were for Europeans last year,” he added.

“We are very pleased with the beginning of our season in Shanghai,” said Pechalat , 28. “We are a little stressed because this is our first competition and you are not sure if you can do your best.”

Like at Skate America, Weaver and Poje came in ahead of Bobrova and Soloviev in the short dance. Performing to music from The Sound of Music, the Canadian silver medalists turned in a technically solid performance as well, and had the same levels for their elements as their training partners from France. However, they only met four out of six of their key points on the patterns and earned slightly lower grades of execution (GOE). They scored 65.59 (32.83 and 32.76) points, just a tad below their seasons best.

“There was not a lot of down-time between the two Grand Prixs, so we didn’t have a lot of chances to change many things,” offered Poje, 25. We tried to focus on the points where we lost a lot. We focused on the Polka and on the footwork to try to bring those up for the competition, and we are happy with how the Short Dance went today.”

The skaters were surprised to learn that the The Sound of Music is a popular movie in China.

“We didn’t know that,” Weaver, 23, answered when a journalist told them. Poje explained that they chose the music in memory of his grandmother who passed away earlier this year. She was of Austrian descent and loved the “Edelweiss” Polka.

Bobrova and Soloviev also turned in a strong performance to their classic Polka and Waltz set to Russian movie soundtracks Put in a Good Word for the Poor Hussarr and The Crew. With a level three and two for the Polka, a level four for the twizzles and the lift, as well as a level three for the side by side footwork, the European silver medalists achieved a new season’s best of 64.32 (31.50 and 32.82) points.

USA’s Madison Chock and Evan Bates interpreted their Waltz and Polka to music from Quidam from Cirque du Soleil. The Americans were solid and picked up a level four for the twizzles, the lift, and the first Polka sequence, while the second part of the Polka was a level two. They finished fourth at 59.26 points.

Charlene Guignard and Marco Fabbri from Italy turned in a classical Italian Waltz and Tritsch-Tratsch Polka to place fifth with 55.57 points.

World Junior champions Victoria Sinitsina and Ruslan Zhiganshin of Russia probably had hoped for more than sixth place and 55.09 points in their senior-level debut, however, they appeared a little junior-ish in comparison to the top teams. Their Tennessee Waltz was smooth and featured a level-four lift and level three side by side footwork and twizzles. The Yankee Polka was upbeat and well done with a level three for both patterns.