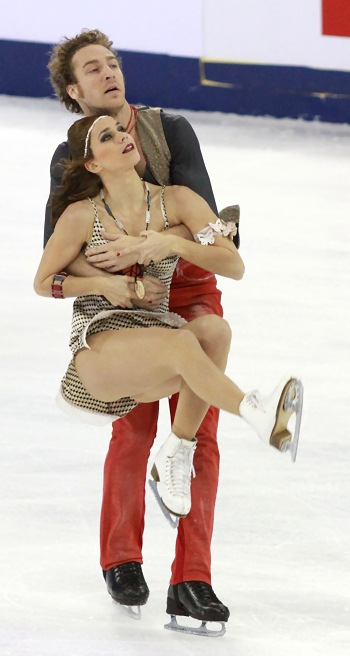 Nathalie Pechalat and Fabian Bourzat of France perform to a “Rolling Stones” medley at 2012 Cup of China.

Nathalie Pechalat and Fabian Bourzat of France opened their season with a win at 2012 Cup of China Saturday in Shanghai. Ekaterina Bobrova and Dmitri Soloviev of Russia overtook Canadians Kaitlyn Weaver and Andrew Poje to earn silver, just as they did at Skate America two weeks ago.

Overnight leaders Pechalat and Bourzat entertained the crowd with their upbeat Rolling Stones program set to Miss You, Angie, Sympathy for the Devil, and Start Me Up. The audience began clapping along with the music as soon as it began. The French champions were very solid on their elements, earning a level four on all elements except for their level-three diagonal and circular steps.

“China is a lucky place for us. We won the Cup of China three years ago and now again,” said Bourzat. “It is a great start to the season for us and we are pretty pleased with what we did. We can still improve on this. For example, be more relaxed when we go out on the ice.”

“I was quite stressed out,” he explained, adding that his partner was feeling the stress as well. “It wasn’t our best performance this year. We skated better at the Masters (in early October).”

Bobrova and Soloviev’s dramatic Man with a Harmonica and Tosca was quite a contrast to the fun program of the French. The Russian champions were powerful and smooth at the same time. They picked picked up the highest level of difficulty for the lifts, twizzles, and spin, but the step sequences only garnered a level two.

“Since Skate America, we changed only a few things as there was not much time, but we are pleased with the work that we have done,” Soloviev commented.

“We were a little tense tonight,” he admitted. “I think that emotionally and technically, we skated better at Skate America. It was cleaner.”

Bobrova agreed: “As for our score, we got the same levels as at Skate America, except for the footwork. So if we consider that the technical score is almost the same, I also think that we skated better at Skate America.”

With two silver medals, Bobrova and Soloviev should be able to qualify for the Grand Prix Final in December.

Weaver and Poje’s charming program to Humanity in Motion tells the story of an artist whose love brings a sculpture to life. The Canadians skated with a lot of flow and had a level four for the lifts and twizzles, but the spin and the diagonal footwork merited only a level two. Their score of 93.38 (44.25/49.13) was a season’s best, but not enough to hold onto second place, and the 2010 Four Continents champions dropped to third overall at 158.97 points.

“Andrew and I are very proud of the performance that we gave today,” said Weaver. “It was much improved from Skate America. Obviously, given the the short time, we didn’t have a lot of time to change things, but we fixed a few levels. We still didn’t get a (higher) level for the spin, which is frustrating.”

It is not likely that the team will earn a spot at the Final, so they plan to go back to the drawing board and make sure they bring up their levels.

USA’s Madison Chock and Evan Bates delivered a solid dance to the music from the romantic Doctor Zhivago soundtrack. They had good speed throughout, and with five level-four elements and lots of positive GOEs, earned the second-highest technical mark. They came in fourth overall at 149.54 points.

Charlene Guignard and Marco Fabbri from Italy finished fifth with 137.58 points after their classical dance to Four Seasons in their grand prix debut.

“We are very happy to come fifth in our first Grand Prix event,” said Fabbri. “This is not just like the international competitions, it is a much higher level.”

World Junior champions Victoria Sinitsina and Ruslan Zhiganshin of Russia interpreted a modern Tango. Apart from Zhiganshin’s wobble on the twizzles, they did well. The Muscovites were ranked fifth in the free dance, but remained in sixth place overall with 137.46 points.