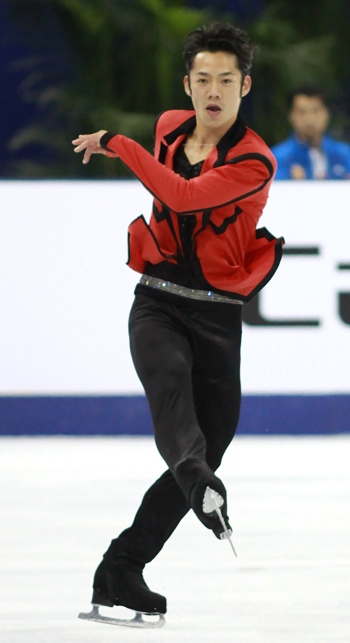 Daisuke Takahashi of Japan performs to a Rock’n’Roll medley at 2012 Cup of China.

Daisuke Takahashi of Japan edged out teammate Tatsuki Machida by 1.31 points to take the lead in the Men’s Short Program at the 2012 Cup of China figure skating event Friday in Shanghai. Sergei Voronov of Russia currently sits in third place.

Takahashi is well known for his versatility, and he did not disappoint his fans. This year, he came up with a Rock’n’Roll medley that underlines his quality as a dancer. His costume, consisting of a fancy red jacket and black pants, was fashionable as always.

The 2010 Olympic bronze medalist struggled with his quad toe, two-footing and under rotating it, but he quickly regrouped and added a triple toe to the triple Lutz for a combination. He also landed a triple Axel in the second half of the program, and earned a level four for two spins and a level three for the footwork and the change camel spin. He scored 84.79 (41.90/42.89) points for his effort.

Naturally, the Japanese champion wasn’t entirely pleased with his outing.

“It was not so good,” said the 26-year-old. “I missed my quad, and my spins and my steps were not correct, but the audience was very supportive.”

When asked about his error on the quad, he answered: “In today’s men’s skating, you need the quad, and a lot of skaters have tried it today. Maybe the ice wasn’t so good anymore when I was skating. I just made a mistake.”

Machida is another very interesting Japanese skater, although not quite so well known yet. He didn’t risk a quad, but delivered a strong performance to a kind of electro pop piece entitled F.U.Y.A by C2C, completing a triple Axel, a triple flip-triple toe combination, a triple Lutz, and three level-four spins.

“I was a little nervous, but I did my best,” offered the 22-year-old. “My condition was not so good after Skate America. I was a little tired physically and mentally, but I practiced in Japan before this competition, and I took a rest which was very good for me.”

“Stéphane and I were looking for a new style in my performance,” he shared. “It is very difficult, but I really enjoy my program.”

Voronov had a difficult season last year, battling a chronic foot-injury, however, he came out strong in Shanghai with his routine to the Russian Sailor Dance. The quad toe was a little shaky, so he just tacked on a double toe, but the triple Axel was very nice. The two-time and former Russian champion also landed a triple loop, and his spins merited a level four and three. He scored 73.58 (39.44/34.14) points.

“This is my first competition after my injury and the World Championships, and almost everything was perfect,” the Muscovite commented. “This is a success for me. I feel comfortable here as it is my third time at the Cup of China.”

The result, however, is not so important to him.

“I did not want to think about the result,” the 25-year-old pointed out. “I just want to show what I can do, just to go clean and enjoy my skating. After the World Championships, I was bothered by my injury again and couldn’t skate for two months. We even considered a surgery, but then decided it is not necessary.”

“This kind of style is just in my blood,” said Voronov. “I don’t have to work hard to get into it. It comes from my heart.”

USA’s Adam Rippon placed fourth at 71.81 points. He opened his classical Nessun Dorma program with a level-four change camel spin, but then crashed on his triple Axel. The 2010 Four Continents Champion recovered to land a triple flip-triple toe, but then under rotated the triple Lutz which he performed with both hands over his head.

China’s Nan Song went down on his opening quad toe, but nailed the triple Axel and triple Lutz-triple toe in his Middle Eastern inspired routine to score 70.86 points. He finished fifth.

Song revealed that he is affected by a foot injury sustained in September due to a fall in a National competition.

“I have been able to train fully only for two weeks now,” said the 22-year-old. “My condition is not yet the best.”

Canadian Kevin Reynolds underrotated and fell on the quad Salchow, and then stumbled on his triple Axel before hitting a triple Lutz-triple toe in the second half of his routine to Chambermaid Swing. This music and style actually suits the skater from Vancouver very well, and brings out his personality. The 23-year-old also picked up points for two level-four spins and level-four footwork (69.87 points).

Brian Joubert of France is still one of the most popular skaters, despite all the banners displayed for Takahashi, and really had an off-day. The multiple European champion first tripled his quad toe for a triple toe-triple toe combination, then he fell out of his triple Axel and doubled the Lutz. The spins were a level three and two. That left the 28-year-old in seventh place with 63.27 points.

It’s possible that Joubert was still affected by a stomach upset that bothered him on the plane. He appeared tired as well, and did not go through the mixed zone to comment.